couple of 24 inchers that didn't make it

Still no big reports or pics that I've seen, here are a couple of 24 inch specks that didn't make it, just downriver from New Bern.  Hope the whole shoreline doesn't look like this. 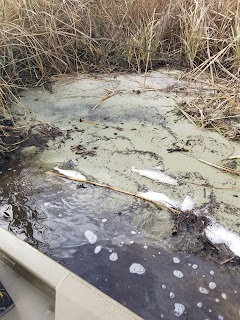 Kind of hard to get a handle on the trout freeze, reports are varied.  Below is from a really good trout fishermen from Oriental.  I give a lot of weight to his reply to my question about how bad was the trout freeze.    Got any reports?  Pics?

"ALOT of trout were/are deep way upriver on the Neuse and Trent.  I have been out several times, and only saw a few scattered floaters. Not much was observed locally in the shallower creeks, but it was so cold that I think that anything that got caught in 6' or less ended belly up.  In my opinion, we have not seen many dead trout in the local creeks because they got absolutely HAMMERED by the netters, and there were not many trout left for the freeze to kill.

This year, much like the old drum, a large number of our fish moved upriver to around New Bern this fall.  Since it was already cold, they were already deep and didn't have any trouble sliding from 15' to 25' to stay out of the extreme cold.
I have been out several times, and caught several pups, and two slot drum, with the largest being 24".  Rock, white perch, crappie, etc... are all biting well and a few trout are starting to be caught as well.  As that water warms up a little more, I think you will see many more trout being caught in the mixed bag.
I think we will have a better spring than many people are thinking right now."
------stu

I hope Stu is correct in his observations, the current closure on speckled trout harvest will allow the fish that did survive the freeze to reproduce and get us started on the right track.

Got caught up in that after party and the after party results and failed to post about our last day.   Capt. James gave us our shots, but missing a grand slam on the last day is no way to win a tournament.   I did catch a stripey, giving me a grand slam for the event, but team Dragin Fly settled into the middle of the pack, a grand slam away from the top 5 or 6 boats....Good that the marlin bite is continuing with consistent shots at grand slams.  Almost daily multiple  blue marlin bites with scattered shots at striped marlin and more sails showing each day.   The best of the bite has been up on the edge, so we have not ventured out to find the tunas lately.

When you see 'em, you gotta catch 'em

Saw 3 or 4 marlin yesterday but only got a bite out of 1 of them, shame, that is what we needed to keep us within striking distance.    It can still happen, but we will need all of those marlin today.

posted by Capt. George Beckwith at 4:53 AM

How is the weather up there?    Duck hunters love it, but after the season closes, the long, cold winter will really get miserable.   Come visit us here in CR!

We caught three big fish yesterday.   A big blue marlin, a big striped marlin and a big sailfish, good for a boat grand slam and along with a couple extra sails, good for about 10th place in day 1 of the Los Suenos Triple Crown.     Wish us a lot of marlin today, we are within striking distance of the stage.

posted by Capt. George Beckwith at 5:44 AM

I went down to Quepos to make sure that the Dragin Fly arrived and got checked into the marina prior to the 2nd Annual Rock Star tournament.    Turns out that the team who chartered the boat needed and extra angler......I just happened to be availalbe.    As we signed up for the tournament I suggested that we also  sign up for the tuna money.

Day 1 we only caught a blue marlin and a sail which kept us in the running for the billfish division but the 30 pound tuna we caught was good for 3rd place in that category.

Day 2 we start off with a pair of sails and a blue marlin.  After catching the blue, James picks up and runs to a school of tuna to catch a quick fish before heading back to the billfish.   This is a brave move, but considering that only 5 boats caught tuna the day before, with another 30 pounder, we could lock up that tuna cash.  We quickly caught another 30 pounder, this one the only tuna weighed for the day, so good for the tuna daily and the agregate tuna money.

Back on the billfish grounds, 5 minutes after putting them out,  we caught a 2nd blue marlin which temporarily put us in the lead for the billfish division.   Our lead evaporated in the afternoon and our fate was sealed with the striped marlin that I missed late in the day, potentially good for 2nd place, instead we settled for 7th.

The tuna we had for dinner that night was pretty good, worth about $750/pound.

posted by Capt. George Beckwith at 6:20 AM

Roanoke River ging to be bright this year

The freeze is not a bad thing for the stripers, but has put a hurt on the trout.  As you can see from Mitch's report below, it is not too early or too cold to have good fishing.

A couple of super year classes will have large numbers of keeper fish on the upper Roanoke starting in mid April.    Our calendar is getting full and we recommend advance reservations.

From now through April 15 we are offering full days on the lower Roanoke for $600.

posted by Capt. George Beckwith at 9:17 AM 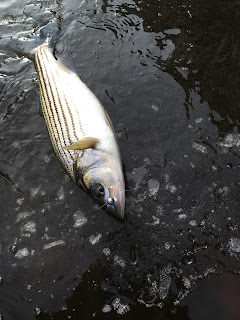 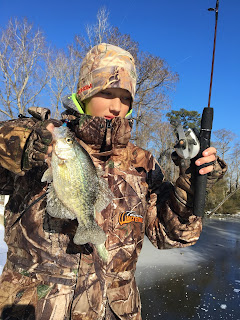 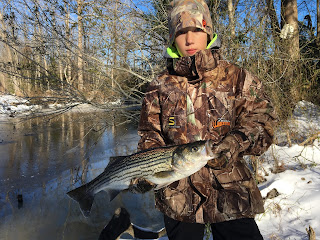 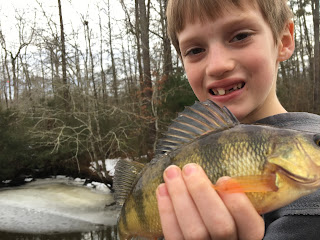 George,
I've never iced fish but a few true times.  Most of the time customers back out when temps lock down as everything they've read goes against the grain.  Few years ago I had a coast guard rescue diver come in to fish and the Roanoke had about 10 ft of ice around the edges, the Cashie had iced over.  Well, I was willing and he was paying and we busted a hole in the Cashie River and caught Stripers until he said he couldn't believe it.  Heck we had an awesome day.

Well this year Every body of water has frozen beyond anything I've seen.  We went looking ducks but all my holes were void and I've cut the bottom out of a fiberglass boat, once so did not want to break ice in the boat.  After a day or so of eating everything in the house, the walls couldn't hold me.  My son has asked for years for me take him ice fishing.  It was the perfect storm and fish are way better eating than ducks!

posted by Capt. George Beckwith at 9:12 AM

This week marks a decade since we splashed the Dragin Fly. It has been an incredible ride…sometimes nerve racking but also incredibly satisfying to see what we have all built together.
I first met Captain James in 2007 while the Dragin Fly was being built. I was 30 years old and had little idea of what was coming around the corner. We had frank and honest discussion about who we were and what we were trying to accomplish and I remember asking James to treat the Dragin Fly as if she was his.  My hopes and expectation were not only met but they were surpassed over and over again. When the great recession hit during our first season and the pressure felt overwhelming Capt James stood beside us as a true partner and helped establish the Dragin Fly as a superb charter boat. James’s professionalism and friendship where instrumental in making it all work out.
Berto our first mate and alternate Captain has also been with us since the beginning. His compulsion for perfection has kept the Dragin Fly and her equipment looking brand new from day one to today.  I have often sympathized with Berto that he has the hardest job on the boat. As first mate he is responsible for the care and maintenance of the equipment, he trains our second mates (which typically go on to be first mate on other vessels due to their excellent experience), and as alternate Captain he also has to fill some big shoes and does it very well.  He also continues to help me improve my sailfish hooking skills (a job forever in process).
Their wives and children have also been an integral part of the team giving James and Berto the support they need to work as hard as they do. Jacqueline’s and Glenda’s efforts deserve independent recognition!
In general I tend to be a shadow in the background Dragin Fly operations. I am involved in almost every aspect but George tends to be the face where the two of us are concerned. While the last ten years seem to have gone by in a flash one thing is clear, James and Berto are not our employees, they are our partners, our friends and a significant part of our family. I want to clearly express to them and their families that their efforts and contributions are immense and central to the success of the Dragin Fly and that my respect and affection for them is heartfelt and deep.
I am also thankful for the ten years of community that we have found here at Los Suenos Marina. The people we have met and have the good fortune to call friends and the facilities have made this experience all the better.
I can honestly say that George brought (dragged) me into this with significant reservations, helped calm me down during plenty of stressful moments and was at the ready with a glass of Champaign when we realized that the light at the end of the tunnel was NOT A TRAIN. I am extremely proud of what we have all built together and hope that all involved know how thankful I am to have them in my life.
Anna Beckwith

posted by Capt. George Beckwith at 9:48 AM

This 20 pound tarpon forgot to migrate south and paid the price.  Photo from Capt. Phil and Dawson's Creek on Dec. 19 when the water got below about 50 degrees.   The trout can handle that, but the same thing happens to them when it freezes. 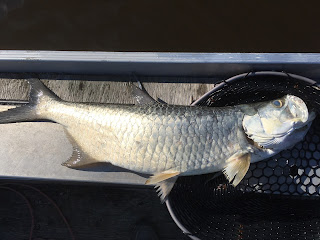 I have received reports of large numbers of dead, floating trout from duck hunters on the eastern side of the sound around Hatteras.  Also reports coming from the Pungo River.  Going to be very ugly I am afraid.

No trout until june

due to the impending freeze trout season for recs and commercial fishing will close on Friday not to reopen until June 15.

Hate to be pessamestic but this does not look good for the specks.