Now this kind of reports we can take raised two blue catch one three sailfish and a nice yellowfin tuna today, lots of Marlin and sailfish seen out there today our fishing is coming back to normal 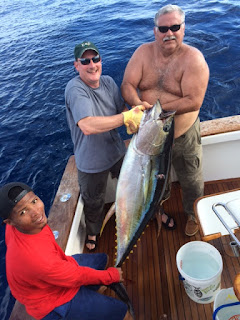 Multiple reports of the red bait balls of anchovies that hit the inlets, covered with chewing albies and double digit (XX) days on the fly.

Jake and I both have some openings over the next few weeks and the boats are in the water.

Well it looks like Albie season has finally begun in the Cape Lookout region of eastern North Carolina. During the last two days (November 15 and 16) I have had the pleasure to fish with Lee Smith from West Virginia, Lee and I met through his love of fly fishing and Mako fly reels. This is the first time in over ten years that lee fly fished for false Albacore "Albies", and yesterday he started with a great day, he caught thirteen Albies from 15 hook-ups, mostly on sinking lines but a few while sight casting on the surface. 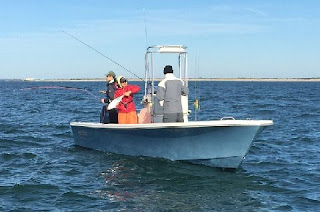 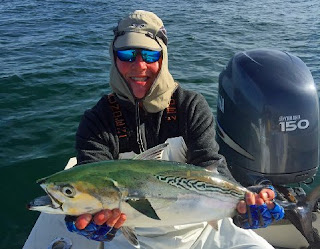 The weather finally cooled the water down to under 70 degrees, which has made the fish bite really good. Today we worked on sight casting a floating line on a TFO eight weight fly rod to Albies busting bait on the surface. Lee did a great job, he hooked five, pulled the hook on one, broke the fly line on another and caught three fish in the 10 to 15 pound class. We are having a great time, and still have a full day tomorrow for a record day! I love my Job, wish you were here, stay tuned for more reports tomorrow.
Regards
Jake

Capt. Mitchell is the man with the IBX, its good to see him get in on some of the OBX 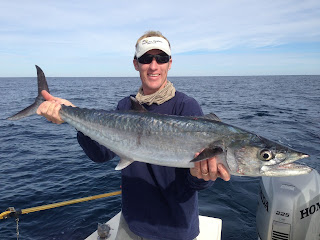 George,
"Phil and Gene invited me fishing the other day, they said they were going by to pick you up as a surprise but you were out of  town.  Any rate we caught some baits for the well.  After a few in circulation, I looked off in the distance and could see fish working so I told Phil, he quickly made way and pushed me into some Albies cutting small baits.  Gene got one off the bat, i in a scramble to get one on fly watched 3 or 4 fish eat minnows close enough to touch with the pole but somehow they didn't like my figure 8 muskie presentation.  I thought this close it what be a dead ringer.  Down they went with scattered fish popping here and there.  Gene said off to the meat!
We ran to spot no other boats were on and he said we'll fish 3 rods.  In presentation 101 Gene hollers for me to look at that King!  New zip code is where this fish was taking it's meal.  They walk me through the ins and outs and I land my first King on bait.  Lines go back out as soon as they're placed in the holder ZZzzzzz, fish on!  Fish on!  Fish on!  We took turns on Kings, I watched an Aj eat a bait dangling from the water as Gene was trying to prevent the fish from eating it, that was mighty cool.  Got to see a King eat a bait, got to experience a King eat a bait while rigging it on the down rigger.  That's right, Gene was consistent on telling me how to stay safe in case a fish eats the bait at the boat and while he was clipping the pin asking me to free spool the line rips off.   Needless to say I for to see some amazing things, tested some gear and got to experience some awesome fishing.
Be sure to call Mr. Phil and ask him about the trip you missed,  you will get a kick out of that."

Albie bite was good also, give us a ring to get into some of it. 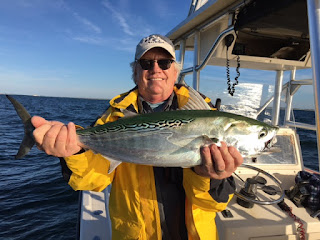 A report from one of our customers fishing with Capt. Jake Jordan:

"In the morning the fish were behind the shrimp boats. In the afternoon they were breaking all over the place in  the Hook. Took the fly out of 13 fish."  -----Lee S.

Every year is different, but some things remain the same.

Some years we have them of all sizes, mixed up year classes,   "pup pups" of about a year in age and not quite legal, some who have made it a couple of years like these 20 inchers. 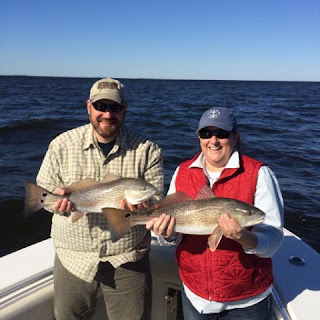 A dozen double headers like this today. They tend to gather up this time of year.... 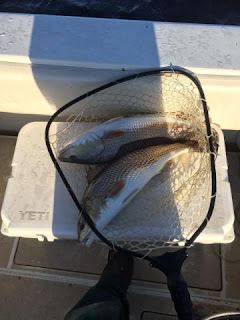 Some years we'll be throwing these back to pick our keepers from the ones at the upper end of the slot, close to 27 inches.   Some years keepers are hard to come by and all you have are the  "yearlings" more than 30 inches long who the following year will be mixed in with the spawners and most likely will leave shallow waters for ocean.  We seem to be letting enough get through to make more drum.  Maybe some of these will make little drum down the beach where their great great grandmama might have done it back in the day.

Things that remain the same?  The red drum that we do have are  gathered up in the lower Neuse River/western Pamlico Sound and they are available for light tackle anglers willing to put on a jacket and take some salt spray.

Thanks Capt. Jennings for the report and pics.

And about every other cast in between.   Really, really good albie fishing.   All you want.  Very user friendly.   I love candy and Bubba Gump.

Tuesday, November 10, Marines Birthday and the beginning of Paul McGarvie's Albie season. We fished aboard "Fly Reel" from 8 AM to 4 PM in fairly choppy (some would say rough) seas, with hard rain during part of the day. We found Albies right away, thanks to Sarah and Brian, and caught seven fat ablies from nine fly bites. 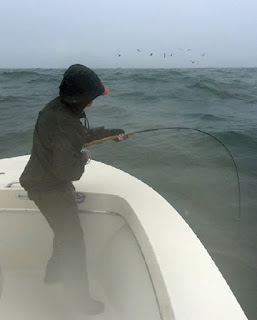 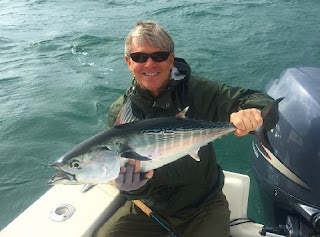 posted by Capt. George Beckwith at 9:49 AM

means hot king mackerel fishing which was the case this past week.   72 at the inlet and the kings were there also, really, really good a little further off the beach.   Grey trout trying to stay cool in the deep holes on the back side and a pretty good scattering of albies along the beach.

Got to give credit to Capt. Brian Horsley of Flat Out charters for this shot of a humpback feeding on menhaden along Shackelford.

posted by Capt. George Beckwith at 7:46 AM 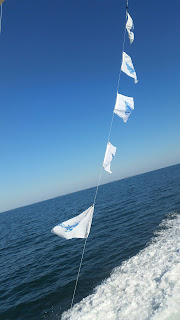 Not bad for pulling wire for wahoo.  Capt. Brian said that at one time there were at least 8 sailfish behind the boat at one time.   Saw at least that many more.  That's CR action right here in NC.   Looks like the seas were about like Costa Rica also....

posted by Capt. George Beckwith at 9:04 AM

Have yall seen this?

I was going through some old files and found this.....

posted by Capt. George Beckwith at 6:39 AM

Somebody asked me how I liked my dumb phone.....

It did not feel like November yesterday in the ocean, water temps on the beach in excess of 70 and air temps over 80.  Not the best conditions for chasing albies, but a beautiful day on the water.

Capt. Ray fared much better, "smoking"  the pups and yearlings on the lower Neuse, Capt. Joe sent these pics from his trip yesterday up the creek: 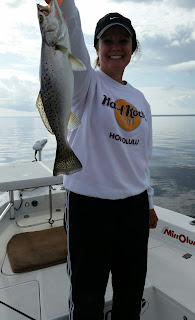 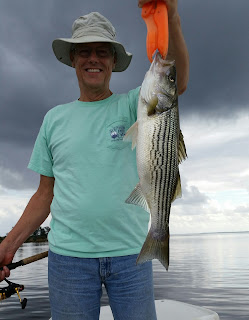 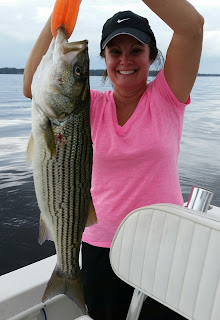 Had a great time with some really nice folks…not on fire but some good pullage !  ----Capt. Joe Ward

I cannot thank you, Ray, or Joe enough..... We had a terrific time both days and it was such a pleasure to meet both Ray and Joe.

The trips were exactly what I was looking for.  Ray and Joe were both very knowledgeable about the area and great guys to get to know.  Steve and I would like to go out with Joe in Oriental sometimes. .....We will have to give you a call and request Joe when the time is right.  Steve was even saying maybe we need to go on one of your Costa Rica trips.

Thank you again so very much!  Take care and stop by the dock sometimes.  We would love to meet you!

Also thank you for the pictures!!!