And the Run Off is putting meat on the dock offshore 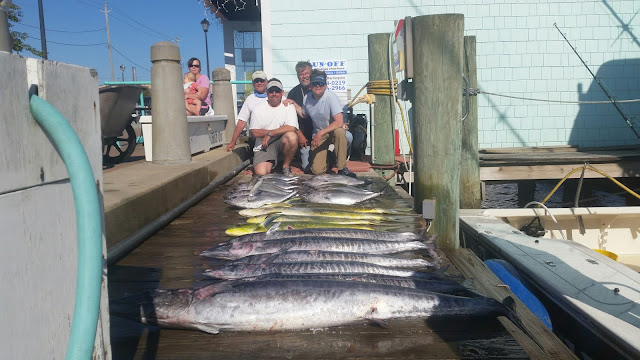 Up the riva and on the coast 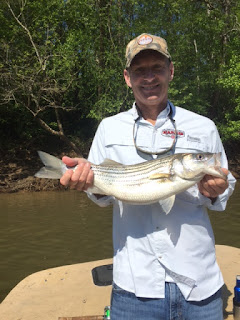 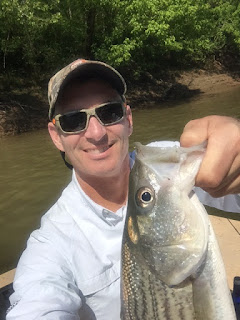 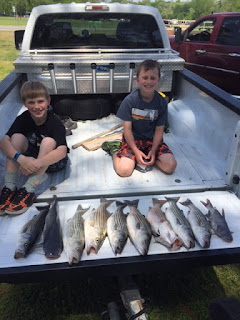 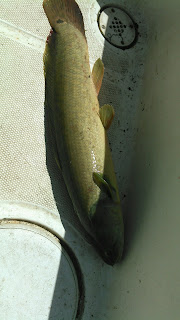 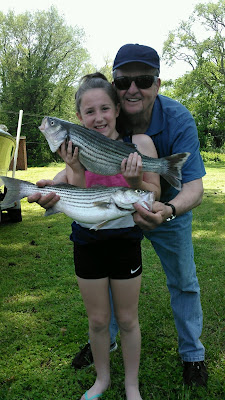 Capt. Chris Kimrey says that the bait balls showed up but the water is still a little cool for the cobias on the beach.  He is getting some good table fare on the calm days. 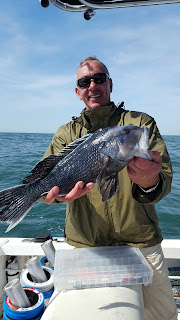 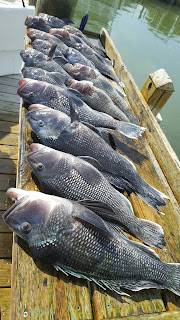 posted by Capt. George Beckwith at 9:43 AM

Dropping water the past several days have made it tough, but things finally stabilized and they are chewing a lot better.   Although the water is low, if it will stay like this, fishing will be good and steady.   It will warm things up and the better bite may be earlier or later, so we may be adjusting some departure/return times and taking a longer siesta during the middle of the day.

posted by Capt. George Beckwith at 8:42 AM 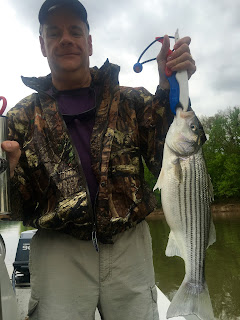 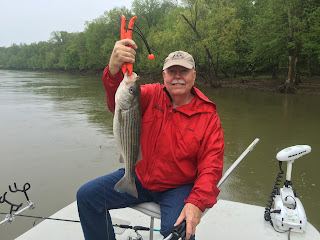 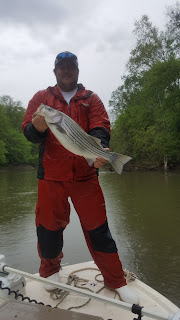 posted by Capt. George Beckwith at 6:56 AM

Live from the riva

Capt. Justin Haddock and his customers getting it done this morning: 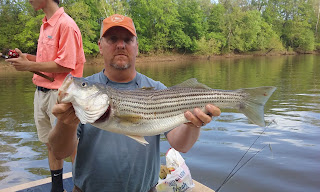 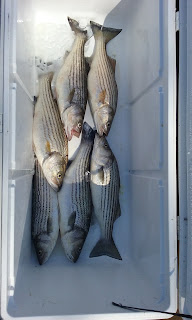 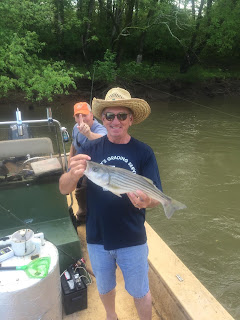 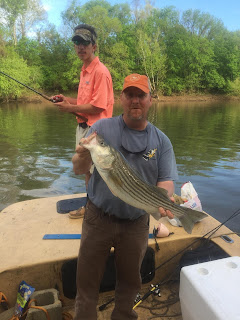 ......the Dragin Fly won top boat in the Offshore World Championship from a field of 74 boats.   Day 3 was tough with only 3 sailfish releases, but James came on strong the final day, edging out Esteban and  another great charter boat our of Los Suenos, the Good Day 2.

Meanwhile on the Roanoke, things have fired off at Weldon but where did all the water go?   Hopefully they'll let out a little more and stretch this out into mid-May at least.

For now, fishing is good, this is from Capt. Greg: "Had 68 yesterday morning with all our keepers"

Pics from Jennings Rose getting his on the Roanoke 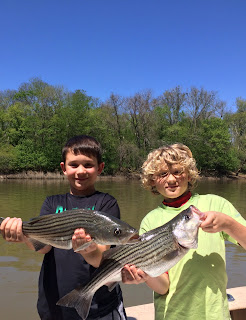 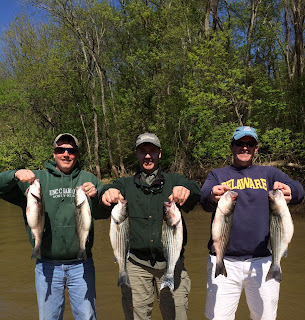 Nice to look over our shoulder

All day James was trying to play catch up with another boat who was mistakenly calling in their sailfish hook ups and their releases, so tournament control had them down for twice as many fish as they actually had.   At the end of the day, James' 9 sailfish releases added with 17 from the day before is good for 1st place going into day 3 of the Offshore World Championship and a field of  74 boats.

Nearshore and up the riva

Capt. Chris Kimrey says that water is still a little cool but if you get a pretty day, it's worth going 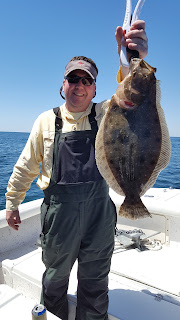 Meanwhile, up the river, this is how Capt. Greg is doing: 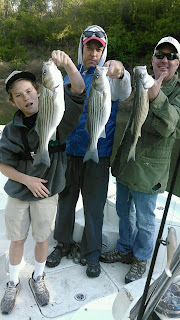 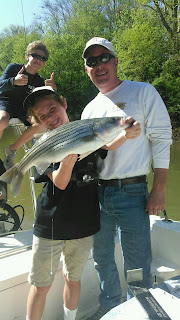 Day 1 of the Offshore World Championship went pretty well.   2nd place of 66 boats.  Our team from Jamaica had a good time and had a lot of shots including a blue marlin.  They were good for 17 sails and 2nd place.   New team tomorrow, we'll see how they do.

Tomorrow I will have reports and pics from Capt. Greg Voliva who is getting what he needs on the riva.

Got some good ones on fly from the low ground along with mixed bags of Perch, Crappie, Bass and Bowfin 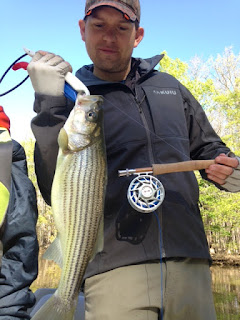 Few nice fish this am on the upper end and a few limits. 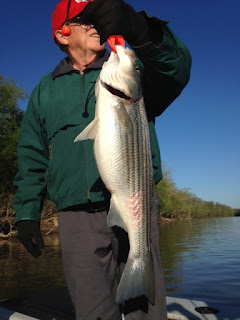 and still some shad around.
-----Capt. Mitch Blake 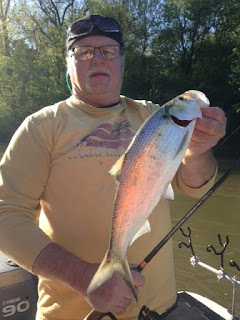 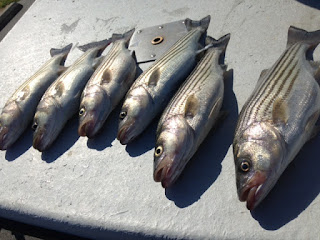 Tax day is usually the first day that you can have a chance at triple digit stripers out of Weldon, that's right, over 100 stripers in a day.   No, you can't keep that many, only 2 per person, but you can often catch all you want.   Sounds like Capt. Greg and Jennings found them like that yesterday, catching them 3 at a time.

Now it ain't always like that, but from now through mid-May, you can have a reasonable chance at it.

We have guides open almost every day.   Long half days with bait are $600 for the boat.   Shoot me an e mail to check availability

"Just talked to Big Haddock.. Jeff on the Proud Mary got his limit and a little over 20 fish this morning, so we should be rolling by next week...... Should be set up for the spring at the Ponderosa by Monday night with the bi shack going."   ---- Capt. Rod "Ponytail" Thomas 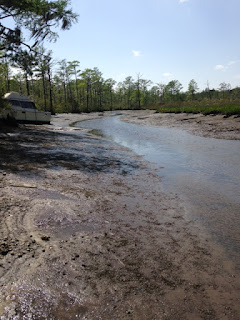 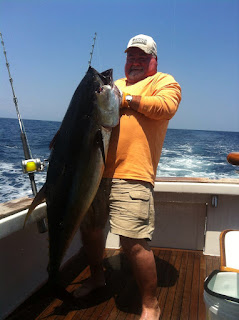 and a handful of sails

Roanoke is starting to bust lose 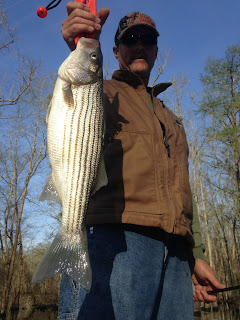 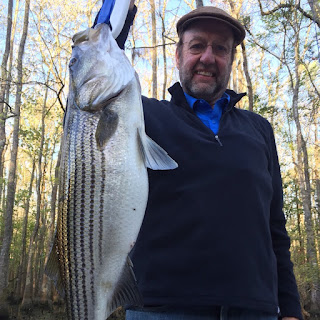 .....to again congratulate the winners.

In short, today we zigged when we should have zagged, but having to do it again, we probably would have made the same wrong move.   On day 1 we saw hundreds of sailfish on the surface, but they were not hungry and we only raised about 35 to the bait missing way too many of them.  The best part of it was that we were all by ourselves.   We just knew that if these fish fired off and if we were by ourselves when they did it, we had the opportunity to gain a lot of ground.

On Day 2 We were back in the same area, saw lots of fish that were very lazy.  Our hook up ratio still sucked, but we had enough bites to stay in the hunt, only 5 fish out of 2nd place.

Today, we got back to the same area hoping to find all of those fish and hoping that today they were hungry, but everything had evaporated.   We hunted all over that area only catching a single or pair here and there.  Then it happened, just not for us.

The Jaruco charged out of the western fleet looking for another wave of sailfish coming over the horizon and they found them.   After calling in a quadruple header, then 5 at one time followed by more doubles and triples the fleet picked up and found them.   We were just too far out of position, nearly 70 miles away in the opposite direction.   We couldn't here the boat call in catches, only tournament control replying with confirmations.

All in all, we had a competitive season, beating many of the world's best boats on a lot of days, on other days finding out how much we still have to learn.  When it was all said and done, we dropped down to 18th place for this tournament and down to 10th place for the overall series.

For the final leg, we're still in the hunt for the leaderboard, only 5 fish out from 2nd place.  A big mountain to climb against the Agitator who is winning this tournament by about 15 fish and the 3 tournament series by a whole lot more.

The bite slowed yesterday from the crazy numbers we have been seeing, but I still had a double digit day, catching 11 of the 22 sails we caught on the Dragin Fly.   That's enough to be competitive, but not enough to be at the top.  We are 6 sails away from the leader, Capt. John Baylis on the Tarheel.

Two more days to go, maybe after today we can look over our shoulder instead of up the hill.

posted by Capt. George Beckwith at 6:21 AM