Since acquiring a small piece of duck marsh on the Neuse River, for the first time in several years I've taken a couple groups of duck hunters.   I haven't had any yellow dogs around the house for a long time, but thanks to Capt. Wade, I've had the best of both worlds:   The chance to see a yellow dog grow up and make his first retrieves, see the lightbulb come on so to speak, and at the end of the day, I get to send him home.   I guess that's what grandparents feel like. 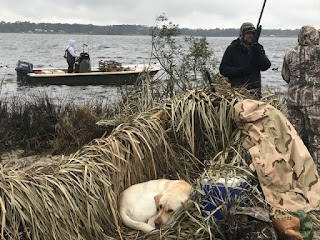 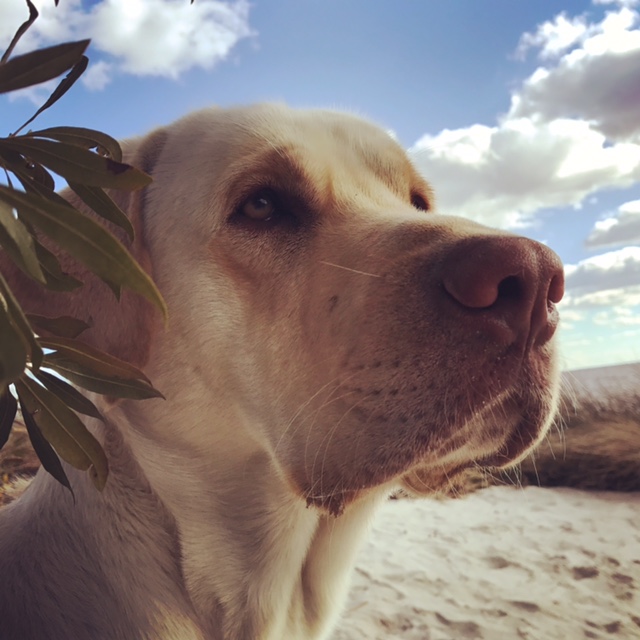 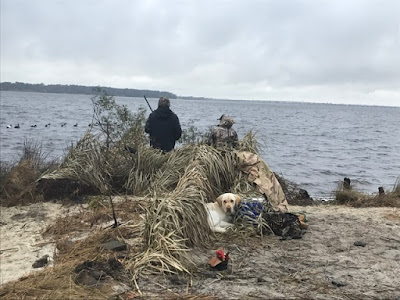 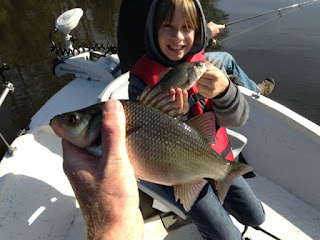 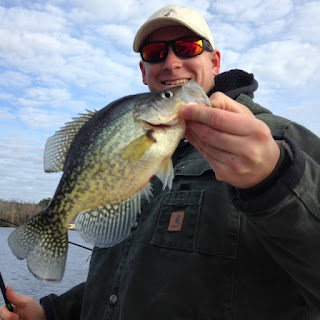 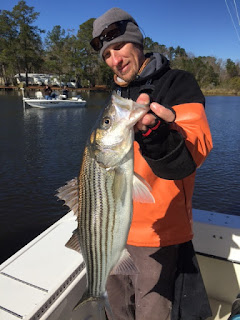 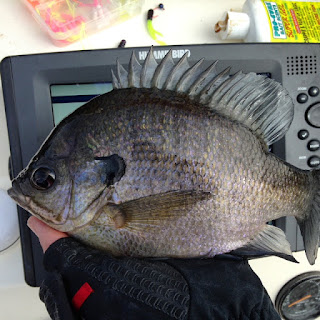 Not much of one, but here it is.   I have duck hunted more this year than in the past 5 or more put together and it has been quite enjoyable.....probably because there are a lot of ducks and I haven't had to go, I've wanted to go.   It has also been most enjoyable because of the company who has joined me, including a big, goofy yellow dog named Clyde.

There are rumors of a decent trout bite that has materialized in the back of some creeks, but you better be there on the day of the big bite instead of the day after.

Up the river crappie fishing is the big thing.

At the beach, there are still some trout around but it's better for those who are in the know and go every day.  From my performance on my 3 hour boat ride yesterday afternoon, I am not in that category.   Water was 52 degrees all the way to the shoals and we saw nothing, not even a flip.   Maybe something was happening in the morning or maybe it's on the other side of the shoals where the water should be warmer, but it looked mighty dead between the shoals and Beaufort Inlet yesterday afternoon.

I'll be messing with the ducks for the next couple of weeks, not heading south until sometime in January.   Ring me up if you want to pass some water under your feet and some cold breeze in your face, not sure that we'll get into anything, but man it sure is nice just to get out on the water this time of the year......as long as it's a pretty day.

posted by Capt. George Beckwith at 8:19 AM

Check out this report from Capt. Mitch.  This is what he's doing up the river.  Plenty of trout at the coast and if you can get in the ocean on the pretty day, the big drum fishing has been VERY consistent. 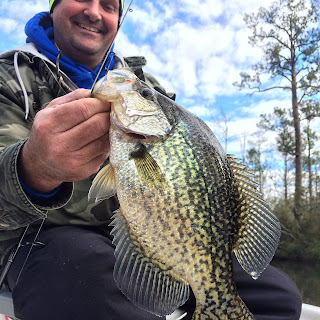 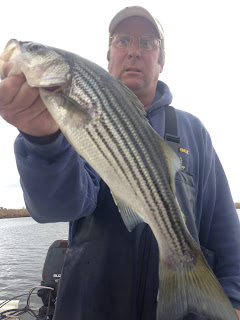 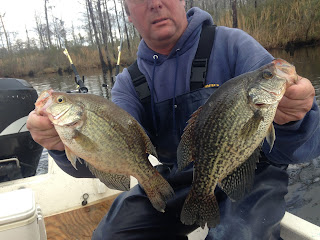 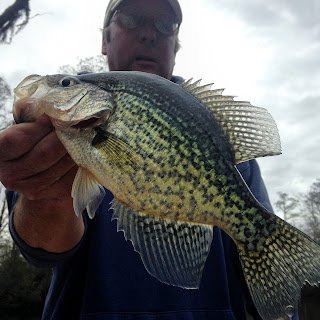 Haven't updated in a bit.
Stripers were playing hard to get but I found the mass and it's right!
Also this is my third year learning the Crappie thing,  Working on  best 10 fish 15lb, half days.  Might not be Trout but it's as good a trip as you'll find around. We also get our Rock on these trips as well.  We can get them on jigs, minnow, fly..... your call I'm on top of it.
Hope all is well!

posted by Capt. George Beckwith at 9:33 AM

Bad day to be a flying fish

"Slow" at the seamounts on the fly

but still managed to catch a striped marlin on the fly and a shot at a grand slam fly.


Our three night trip to the seamounts ended just as it began, with a lazy sailfish at sunset, under clear skies and calm seas.    After a noon departure on day 1, we ran about an hour to the edge and started trolling, found a log, loaded up with live bait and ran to a nearby tuna school.    We got to the party just as it was time to “piss on the coals of the campfire” but we were able to convert at least one of our live bonito into a 30 pound yellowfin, enough for tuna dinner and sushi for the trip.
This was however a fly fishing expedition and no conventional tackle would be used other than to retrieve hookless teasers and cast smaller teasers on spinning tackle at fish that may refuse the fly, in hopes of firing them up for a second look.
As recently as two weeks ago, the Dragin Fly had just come back from a similar trip, but targeting blue marlin on conventional tackle.  Over the two days, the boat raised over 40 marlin and two very tired anglers catching half of them.   Sometimes there were multiple blue marlin in the spread.   With reports like this, it is hard to help but to have somewhat high expectations.   Anywhere else in the world, hopes of seeing a dozen or more blue marlin in a day are simply not realistic.
Our fair skies fled as night fell and we plowed into banks of grey clouds on a very dark, moonless night.  First what was waves of rain bands now covered the entire radar screen and our progress slowed to a crawl.    In addition to radar, epirbs, life rafts, sat phones and other necessary and duplicate safety equipment,  the newest in LED technology helps light up the seas so logs or other debris can be avoided.
Our slow progress meant that we would not arrive at our first fishing location, nearly 150 miles from Los Suenos, until about 9 am.   At about the time we arrived to the offshore seamount, the rain finally began to let up…..temporarily…..and the seas calmed……temporarily.    There were 5 peaks within several miles of this underwater mountain ridge and we made circles around each one of them, assessing which ones had the most bait and which ones we would get quick bites from and later concentrate our effort.   The problem was that we got no bites.   The bait was there, but water temps were a little cooler, as low as 78 degrees which is rare in the tropics.    We marked a couple of big fish and there was more than enough bait, but we raised no marlin.
After 4 hours of surveying an searching the area, we remained strikeless and James started chugging to another range of seamounts.    A couple hours later and after several passes it was frustrating not to get a quick bite.   The circles around the “spot” widened and we finally raised a blue marlin that came in hot on the teaser which disappeared from the marlin’s view, it wheeled around and froze, just below Capt. Joe Shute’s fly.   Just as he moved it the marlin attacked but missed by inches.  That’s what we came for and where there was one feeding marlin, there should be more.
We get the spread of three hookless teasers back out.   About 15 minutes later another blue marlin crashed the left long teaser, then was gone.   Surely we were in the meat now, but as the sun got lower in the horizon, so did our expectations.    Plans were being made for where we were going to chug to overnight when James’ teaser real  explodes with a  really hot striped marlin, easily over 150 pounds. Capt. Warren puts the fly in it’s face and the marlin immediately engulfs it.   Within seconds the marlin charges the boat and Warren nearly gets a quick release, but then he’s into the backing and still going. 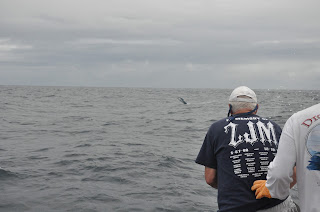 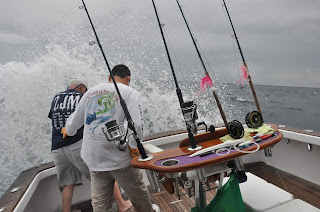 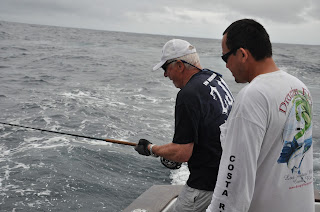 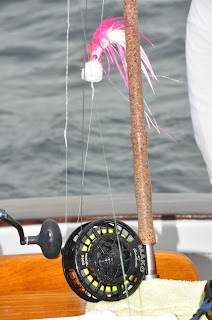 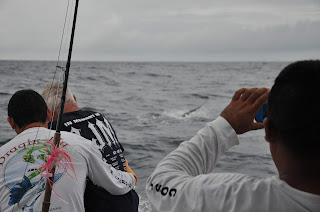 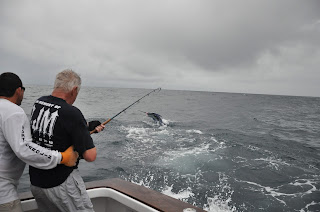 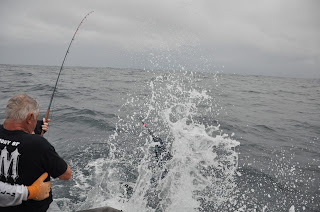 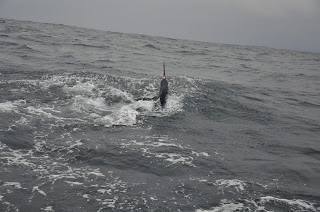 Great shot of the back of Roberto's head..... 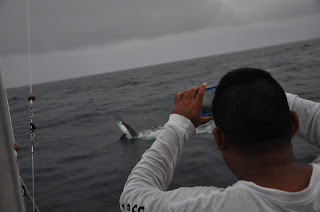 We catch up to the fish and several times Warren is only inches away before another run.   Nearly an hour into battle Warren has given this fish all he wants to give it and the 78 old captain beat that fish down.   Thankfully the 20 pound tippet was in great shape as Warren locked down and literally rolled that fish to the surface, quickly gaining lose line and getting the release before the fish charged off again, settled down and Warren rolled it over a second time, putting the leader into Berto’s hand before breaking the tippet.
Great way to end the day and Mission Accomplished as another stripey comes up on the same teaser now chugging behind the Dragin Fly, but it fades off without a bite.
Day 3 we arrive several hours before daylight and deploy the sea anchor.  The winds have laid down, but it is a soaking, misty rain.   Dozens of dolphins chase flying fish and squid until we pull in the sea anchor at first light.
As soon as we arrive, we raise a blue marlin, but it fades off.  No other bites despite good signs of bait.  We put out some spoons and troll up a few bonito, stitching them up and rigging them as hookless teasers, skipping on the surface.   The good news is that marlin love these skipping bonito, the bad news is that it’s really hard to reel fast enough to take it away from a hungry blue marlin.     That’s exactly what happened about 30 minutes later, a nice blue crashes the bonito but misses, then fades off, then out of nowhere there is a huge hole in the water where the bonito used to be and a blue marlin that is not letting go of it.   The marlin wins and gets a free lunch, but does not return.
An hour later without a bite and we’re plugging in our last seamount on the way home.   A couple miles into the chug, we raise a hot stripey and Joe makes a really perfect cast under another line, immediately hooking the fish which runs about 50 feet out and down and stops, just shaking his head.   After not being able to dislodge the fly, its off to the races as the striped marlin greyhounds on the surface for a quarter mile, spending more time in the air than in the water. 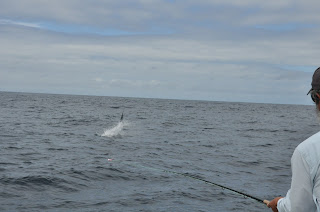 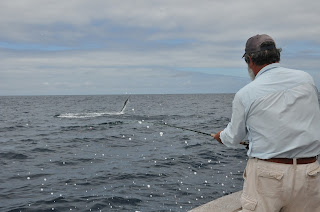 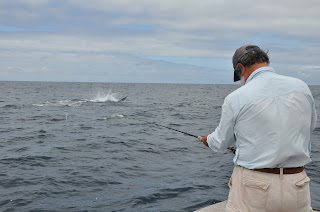 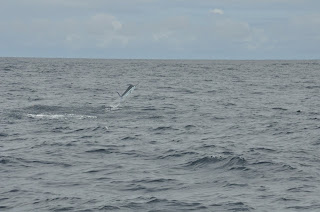 The fish settles down and we start gaining line, but all that shaking and jumping was just too much for the 20 pound tipped, now chafed down to the strength of sewing thread.  Joe’s striped marlin is gone.
The last spot turned out about like the rest, we did raise one lazy blue marlin before leaving the seamounts all together and working our way home, hoping to find a log or current line with more action than what we were getting.    We raised a sailfish, Joe made another great cast and we got to watch a ferocious bite.  He hooked the sail but it made a quick turn and shook the fly before putting on much of a show or getting a release.
The rest of the day was beautiful with calm seas and clear skies, a beautiful sunset and hopefully uneventful ride home……as I write this now.


By anywhere else in the world’s standards, fishing 2 ½ days and raising 5 blue marlin, 3 striped marlin and 3 sailfish ain’t bad at all, but it’s nice to be spoiled.   Congratulations to Warren for releasing his striped marlin on the fly.