Now that's fishing.....this is what they look like when they're stacked up 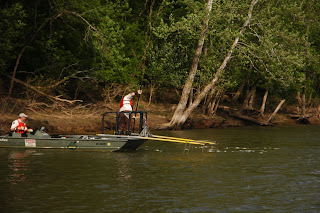 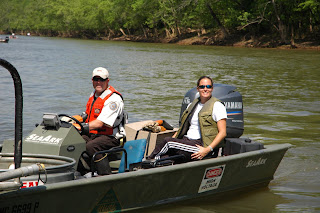 Madam Commissioner checking out what's happening with the stripers 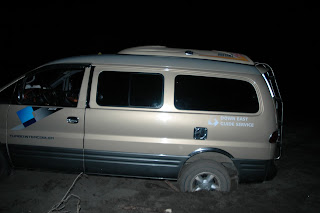 This shot is from my last snook fishing adventure.....the sand was a little soft 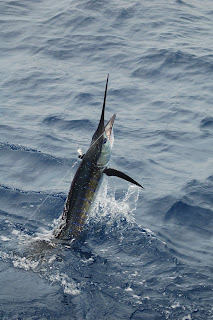 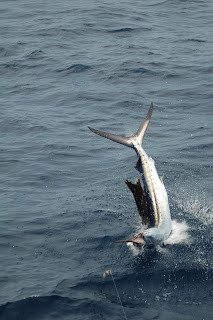 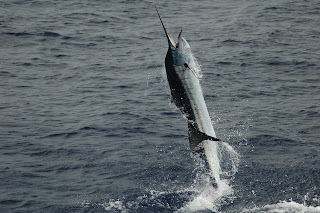 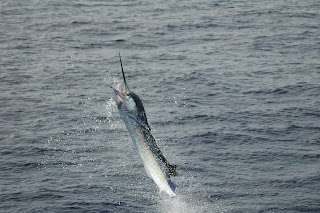 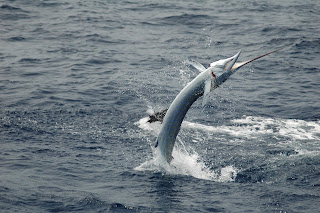 Here's one from Costa Rica that was left on the camera, the guys on the Dragin Fly are having a great April, a mixed bag of dolphin, tuna, wahoo, a few sails and a great marlin bite. Anytime is a good time to be in Costa Rica.

After pulling a Houdini on us yesterday, I went looking for 'em and found them down river. We busted them good. Tougher afternoon, but got what we needed.

Has anyone seen my camera?

Maybe it accidentally made it into someone's bag? Oh well.....

After an "epic" day on the fly yesterday, we struggled today, beating down 50-60 fish. These are the excuses that I heard from several different guides. Same question, different answers:

Some customer pictures from the past few days. Thanks for sending them!!!! 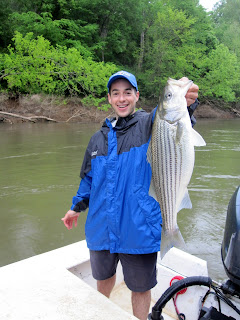 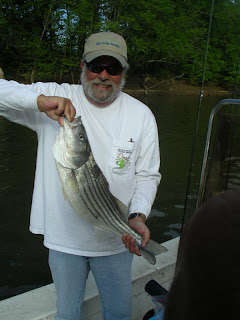 ooops, I left the camera on the boat

but I do have some pretty cool pictures coming.

This full moon has forced a new slug of fish up the river, resulting in some incredible fishing. On our first drift of the day, we landed over 40 stripers on the fly. In the afternoon, two anglers landed over 100 on the fly.

No doubt, up to this point the fishing has been more sporadic than usual, but it is on fire now.

Got a little mojo back today

No big fish, but the fly bite was pretty decent this afternoon. I guarnatee to have some pictures of giant striped bass tomorrow.....stay tuned.

Wow, it sure sucked for me today

It's one thing when you go for hero and end up a zero, it's another thing when you're just trying to catch fish and everyone around you is accomplishing that goal and you're sucking wind. We did a little of both , hero in the morning, zero in the afternoon.....well, not exactly zero, but one of the toughest afternoons I've ever had on the river.

Congrats to H-Man who entered the striper tournament at Weldon and won the youth division....for the second year in a row. Hero in the morning.

Afternoon, the big suck-o-la for me. At least Capt. Ray, Capt. Ponytail and Capt. Lee saved their days by getting what they needed......getting ready to spawn? boat traffic? weather change? Who the heck knows.

Got another load of secret weapons today. 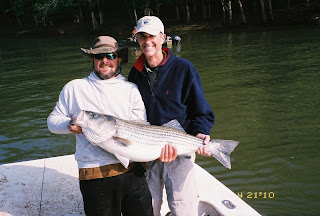 We're picking away at them, no problem with filling the limits in the upper slot. We released a couple more big 'uns today, a 27 pounder and 20 pounder.

Water dropped again on the Roanoke, thankfully it's stablizing and so is the fishing. Should be just right after the crowds disperse this weekend, we've got a few openings during the week next week.

From Capt. Brian on the Run Off below:

secret weapons and fishing on the coast

Capt. Ray and I took a day to load up on the secret weapons, hopefully we'll turn them into some big stripers this week.

During the blow that we had this weekend, Capt. Brian went puppy drum fishing and caught 40+ nice pups and yearlings. Yesterday he made it back out offshore on the Run Off, here is his report:

Capt. James continues with a great April of marlin fishing:

"I am glad that we had the same customers for two days. Yesterday the sail fishing was a litle slow, we just raised 2 sailfish and 1 blue marlin catch 1 sailfish only. Today was much better we raised 4 marlin and catch 3 a grand slam again 1 stripe marlin 2 blue and 1 sailfish"

From Mike about Capt. Ray:

posted by Capt. George Beckwith at 9:57 AM

Friday night they dropped the water. As Capt. Ray said, "That just freaks 'em out". The stripers sure quit biting for several hours in the morning, other than scattered patches of fish that you could get a few bites out of, all in all, Ray and I each caught 30-40 in the morning, including our 20/21 inch keepers.

As the water stablized, the bite improved, in 3 hours Saturday afternoon, we easily caught 40+ fish, including this 25 pound HAWG which was released alive. 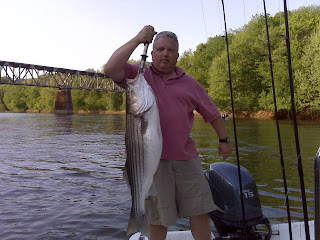 Water levels can be followed at this site:

posted by Capt. George Beckwith at 9:19 AM

Couple of pics from Friday 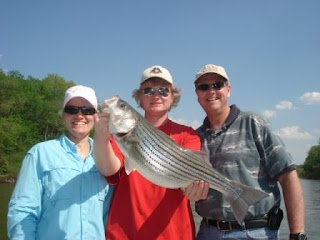 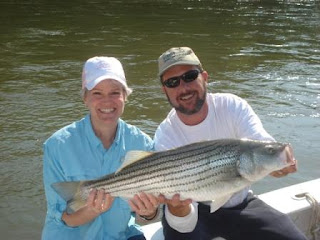 No animals were harmed in the taking of these pictures....

posted by Capt. George Beckwith at 9:15 AM

Capt. Jack would be proud, we released a nice 30 inch female today and "pre-released" another that would have swallowed her, also a few 25/26 inchers in the slot. The fish are really on the move and have been hard to get on and stay on, but the water level is just right and A LOT of fish are on the way. It's going to be a great year!

Come get 'em if you want 'em

Between Ray and I we have openings on Monday, Tuesday, Wednesday.

George says he has been fishing for 1 hour and has already caught over 20 stipers. Looks like it is going to be a great season!
;-)
anna

It's killing me to know what's going on down there....

the fishing is still good down here boss. two days ago we catch 10 sail and 4 big mahi, yesterday we had a grand slam 1 stripe marlin 1 blue marlin 9 sailfish 3 yellowfin tuna and 1 mahi mahi (we raised 3 more marlin that didn't bite)

A recent radio interview I did with Bill Hitchcock can be heard at his new website www.saltwatercatch.com or also at http://www.billhitchcock.net/?p=660

Ray "Trey" Massengill put together some video of his dad's Costa Rica trip.......if Trey had gone down there, he's probably still be there......

posted by Capt. George Beckwith at 7:20 AM

This blog has moved


This blog is now located at http://blog.downeastguideservice.com/.
You will be automatically redirected in 30 seconds, or you may click here.

For feed subscribers, please update your feed subscriptions to
http://blog.downeastguideservice.com/feeds/posts/default.

meanwhile in the tropics

James is pretty much crushing them on the Dragin Fly. The sailfish bite was pretty good yesterday, but he was busy catching marlin, landing 3 blue marlin and 3 sails......

posted by Capt. George Beckwith at 9:41 AM

Not really, just checking out the striper baits.... 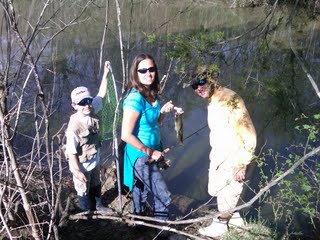 A little R and R this week before getting on the river early nexs week.

Wanna get the bite started?

Just get me out of town, this is from Capt. James on the Dragin Fly:

"well boss the fishing is on fire again, today we was 12 for 18 on sailfish and 2 nice mahi" That figures.

At least the weather is nice and the fish are biting here. Excellent reports from the Roanoke are coming in, the shad are super thick at Weldon and there are a lot of stripers in Williamston. It looks like these 80 degree days are going to put things on schedule. We still have a few openings for the last week of "keeper" season at the end of April and plenty of openings for the first couple of weeks of May for catch and release, top water action and the best of the fly fishing. By May 16 the ocean waters should be warm enough for the cobia. The big boat will be in the water, but we're going to leave a skiff up in Weldon and will be running trips on the Roanoke for as long as the fish stay up there, through the end of May.

This is a March Neuse River striper pic from Capt. Gary Dubiel. He and Capt. Joe Ward have been having some great striper fishing right here in our back yard. 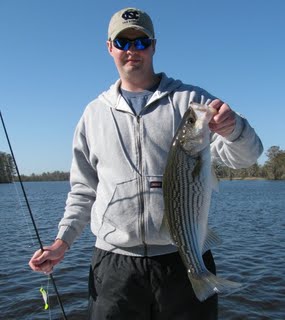 While Capts. Ray Massengill, Greg Voliva, Lee Parsons, David Haddock, Rod Thomas and I will be up on the Roanoke; Capt. Gary Dubiel, Joe Ward and Bryan Goodwin will be taking advantage of the good mixed bag fishing here at home. 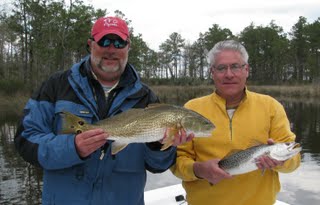