And I've found my way back home. Anna has a huge list of honey-do's so I won't be on the water for a couple of weeks. The calendar is filling up for the Roanoke, I strongly recommend to put your requests for dates in asap.

In Costa Rica, the fishing continues to improve. The Dragin Fly has had a much needed 2 days of rest, but will be back out there for most of April. Plenty of openings in May and June, the months Capt. James thinks will be the best this year.

posted by Capt. George Beckwith at 9:28 AM

Today was a big day for the Maverick/Fly Boats with some of the guys catching as many as 18 sails. The Dragin Fly was tied up to a big tuna, spending almost 2 hours battling the beast that tipped the scales close to 200 pounds.

The season in Costa Rica is in full swing, but it's winding down for me, I'll be home in a week. All in all it's been a good 3 months, but we've worked for everything that we've gotten. Fishing has definitly been slower than in years past, blame El Nino, which seems to be subsiding and the waters are cooling. About 100 miles to the south, reports are starting to come in of boats raising 40+ fish/day. Hopefully they are heading north and the folks fishing for the next three months will get the best of it.

My last week here has been a blast, Capt. Ray was down with some buddies and I got to share one of their two days on the water. They ended up catching 7 sails, 3 decent tuna, 2 dorado, 4 grouper, 3 tilefish and a big tripple tail. Plenty of good eating and everybody caught a billfish.

Today, my dad and I had a father/son day on the water, catching a double header of sails, 3 more singles and a nice little black marlin, my first.

Our friend Jerry "Bubba" Hallstrom sent me these pics from some recent trips that he's booked, I had to share: 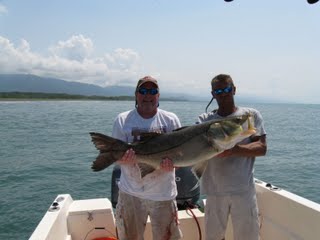 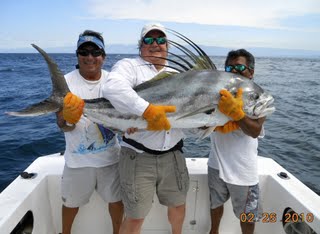 OK, OK, here are some pics.

We got another BIG black marlin yesterday, that's two big blacks this week. We jumped off the striped marlin, losing another opportuntiy at a Grand Slam. Also some pics of some recent sails. 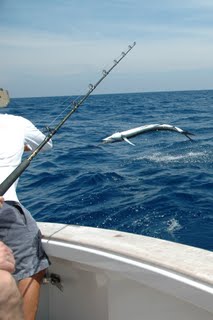 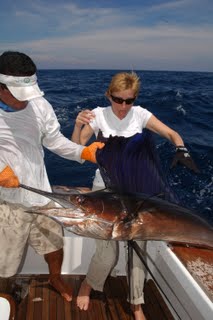 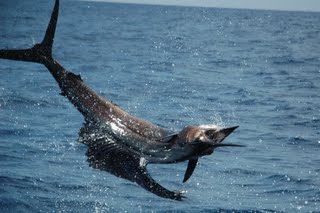 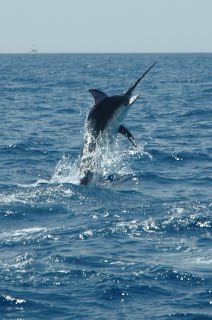 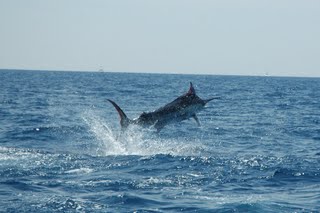 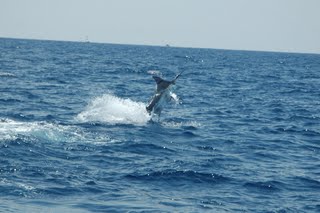 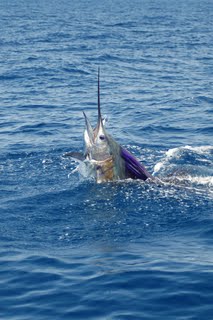 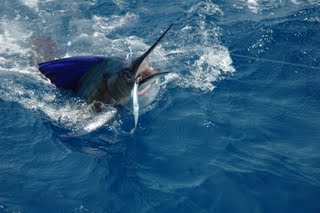 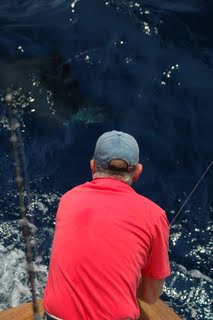 posted by Capt. George Beckwith at 6:53 AM

Capt. Ray went up to Drum Inlet to get on some of the red hot drum action in the suds. While there, they ran into a couple of seals. That shows you how cold the winter has been. 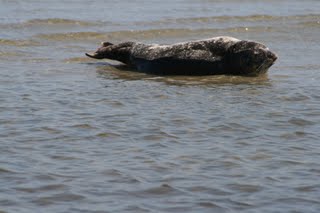 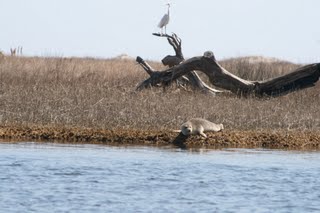 Meanwhile in Costa Rica......after catching the black two days ago, we raised a blue marlin and a striped marlin yesterday but couldn't get a bite out of either one of them, just enough sails and dolphins to make the day.

Snook fishing has been tough.

The snook have not been very kind to me recently. I saw a couple two days ago, taunting me. One was a little guy, just a couple of pounds, munching on shrimp in the surf, he was big enough to eat the rapala I was throwing. The other snook, crashing sardines, was the one I wanted. No bites.....other than a lizardfish. I didn't know that lizardfish existed in Costa Rica, surpised I didn't catch any pinfish.

On Monday Lucky Larry, Joe and Joey came into town and I road along with them. They've been fishing with us down here for many years and had been warned that things were a little slower than normal. Although we did have a double digit day of sailfish releases this week, these guys have come to expect a dozen sails/day as the norm.

The evening before the trip, Joey had been whining about never catching a black marlin and was considering heading to Panama or Australia in the next year to check that off his list. The morning started with a couple of quick dolphin and a sail, then a dry spell, another dolphin and another sail. After catching the second sail, at about 1 o'clock, we picked up and rain to a nearby school of tuna/spinner dolphins.

On the way to the tunas, we saw a couple of free jumping sailfish and something else that made a huge splash. Things worked out just right with the tuna, catching a couple on poppers and spinning rods and 3 on cedar plugs. With PLENTY of meat in the box, we're back on the troll to the free jumpers.

Just as Berto gets the fish cleaned up and the sushi iced down, the right long pops and Chela drops back and hooks a fish, handing the rod to Joey, it was his turn.

The fish never jumps, we get everything clear and get on top of him. Joey starts putting the heat to him, forcing the fish to make a move and that move was up. With the leader in the rod tip, the 400 pound black marlin skies airward. Fifteen minutes later, we've got him on the leader again for a really good look.

Congrats Joey, so should I cancel that Panama trip?

posted by Capt. George Beckwith at 6:42 AM

The sailfish bite continues to improve, most of the boats had a dozen or more shots yesterday. On the Dragin Fly, everyone caught a sail and a wahoo, that's right, we caught 5 wahoo yesterday.

After having several wahoo bites on ballyhoo and losing them because of the hoo's razor sharp teeth cutting the mono leader used for sailfish, Capt. James put out a big planer and slid down some of Capt. Joe Shute's wahoo lures rigged on wire. It didn't take long fishing Carolina Style to get on the bite, adding 5 wahoo up to 50 pounds to a handful of sails.

another marlin....BOOK NOW FOR NEXT YEAR

Things are still slow, but we have caught 3 marlin this week. The one yesterday came from live baiting, which is what we've resorted to. Just not getting many sailfish bites on the troll. Using live bonito on circle hooks, it's a good way to get bites, but you also get a lot of sancochos (missed fish). Sometimes the sails will grab the bonito and just hold it or kill it, not really eating it, glad the marlin ate. 5 sails for 17 bites and the marlin, not a good hook up ratio, but at least we're catching some fish.

We are taking advance reservations for fishing days on the Fly Boats for next year. We can sort out arrival/departure dates, accommodations, tours, etc, but I strongly encourage you to make your fishing reservations NOW!!!!!

For fishing in NC this year, things are also booking up, please make your reservations in advance, but always call us on short notice, we'll try and find a quality guide for you.

No that's a school of drum 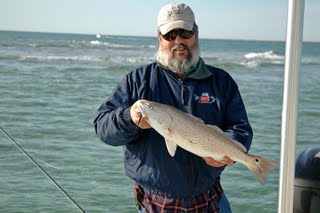 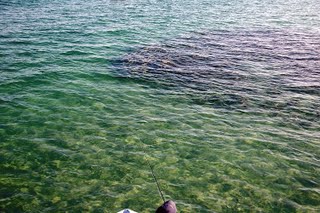 Nice pics of what Joe Shute has been doing on the calm days. Capt. Ray had a little of this up at Drum Inlet. Although we're still in Costa Rica, some of the guys are still getting theirs. We got 4 sails today. 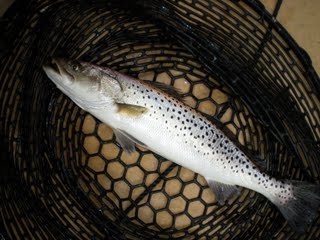 Also, despite the cold stuns, not all the trout are gone.