Come and Get It!

Due to the extension of the keeper season, we've had a couple of cancellations from folks who would prefer to have the river a lot quieter.   They are going to miss out on some spectacular fishing.   This afternoon was our first triple digit half day of the season.

That's right, you can kill 'em through Sunday.  No I'm not setting you up.

Maybe this cold front will back 'em off, but this afternoon things were coming alive on the upper end of the river.  It's going to be a very interesting weekend.

Up in Lake Gaston a boat accident and missing person is resulting in fluctuating water levels downstream as dam operations are varying to assist divers and searchers in the recovery effort.

The result......well, the fish are moving around a lot, but if you can find 'em, it's really, really good. 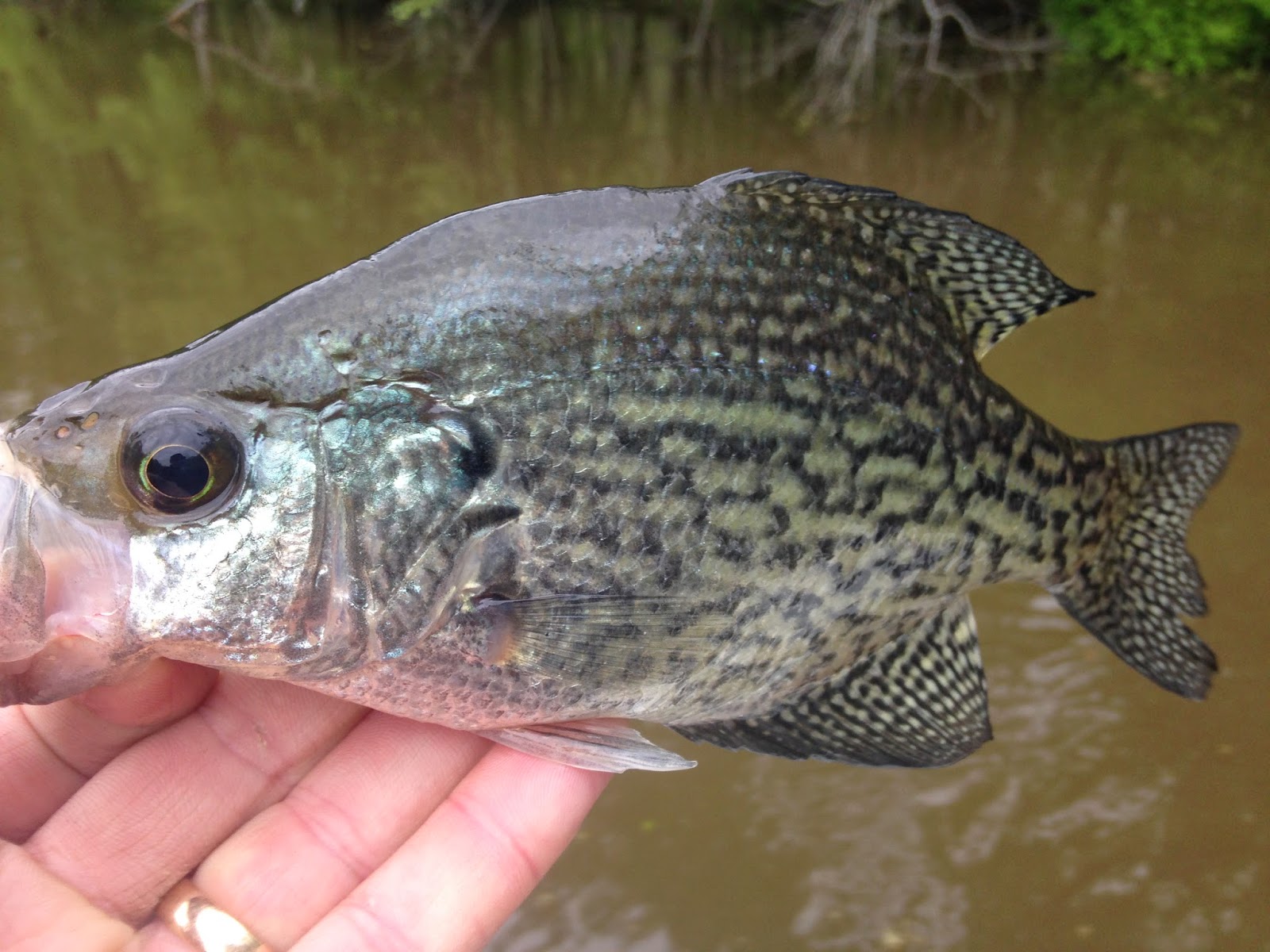 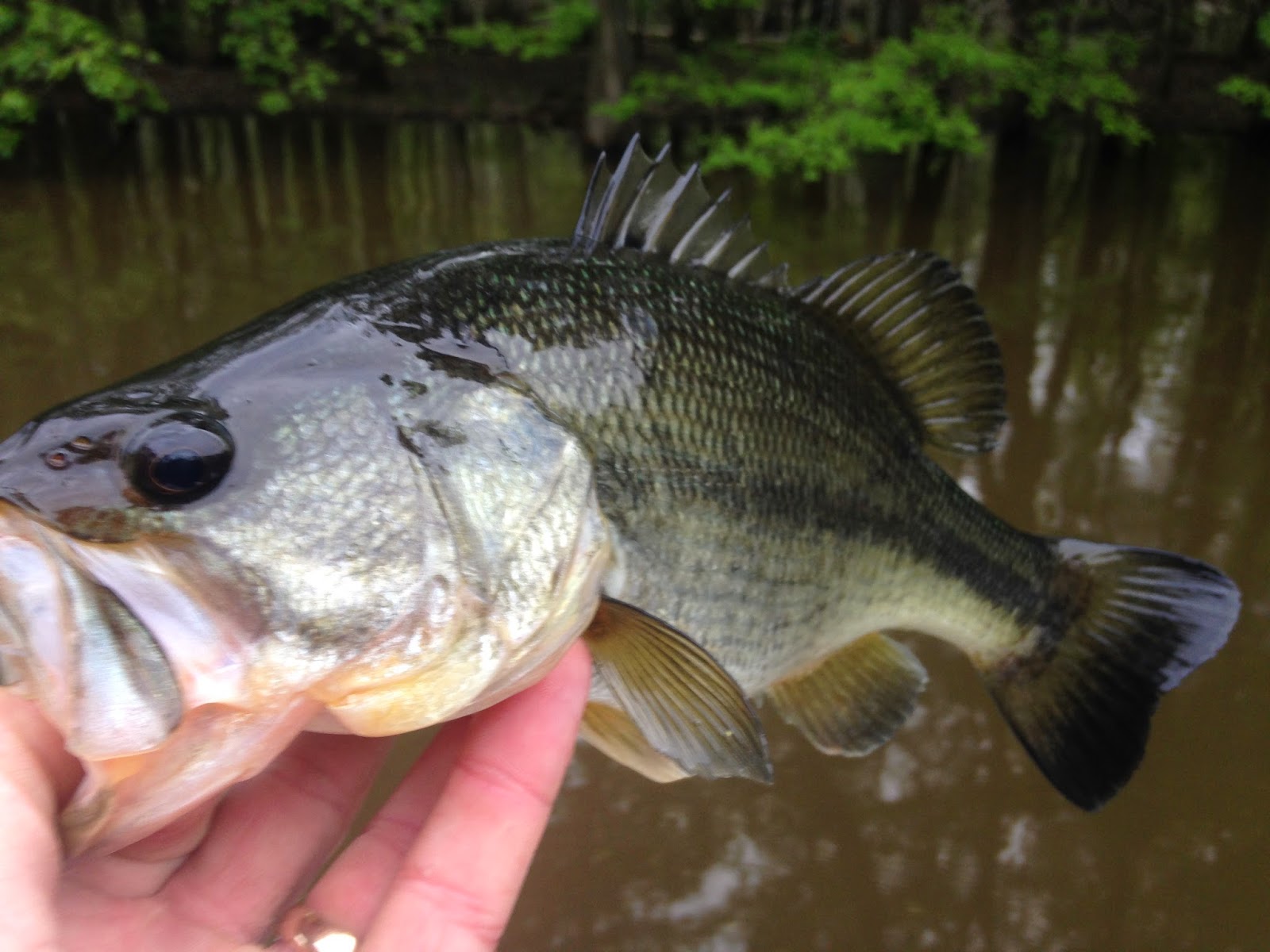 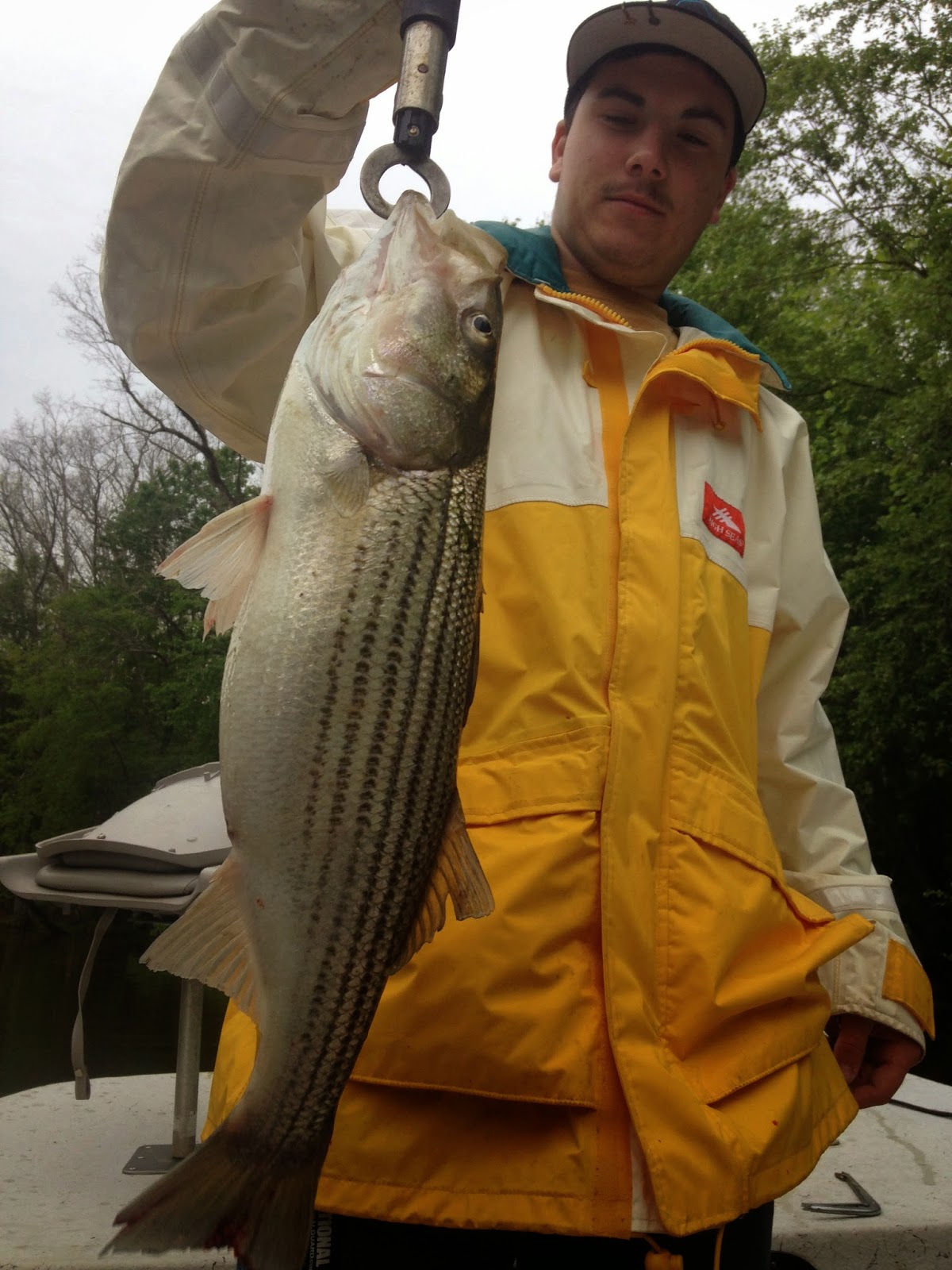 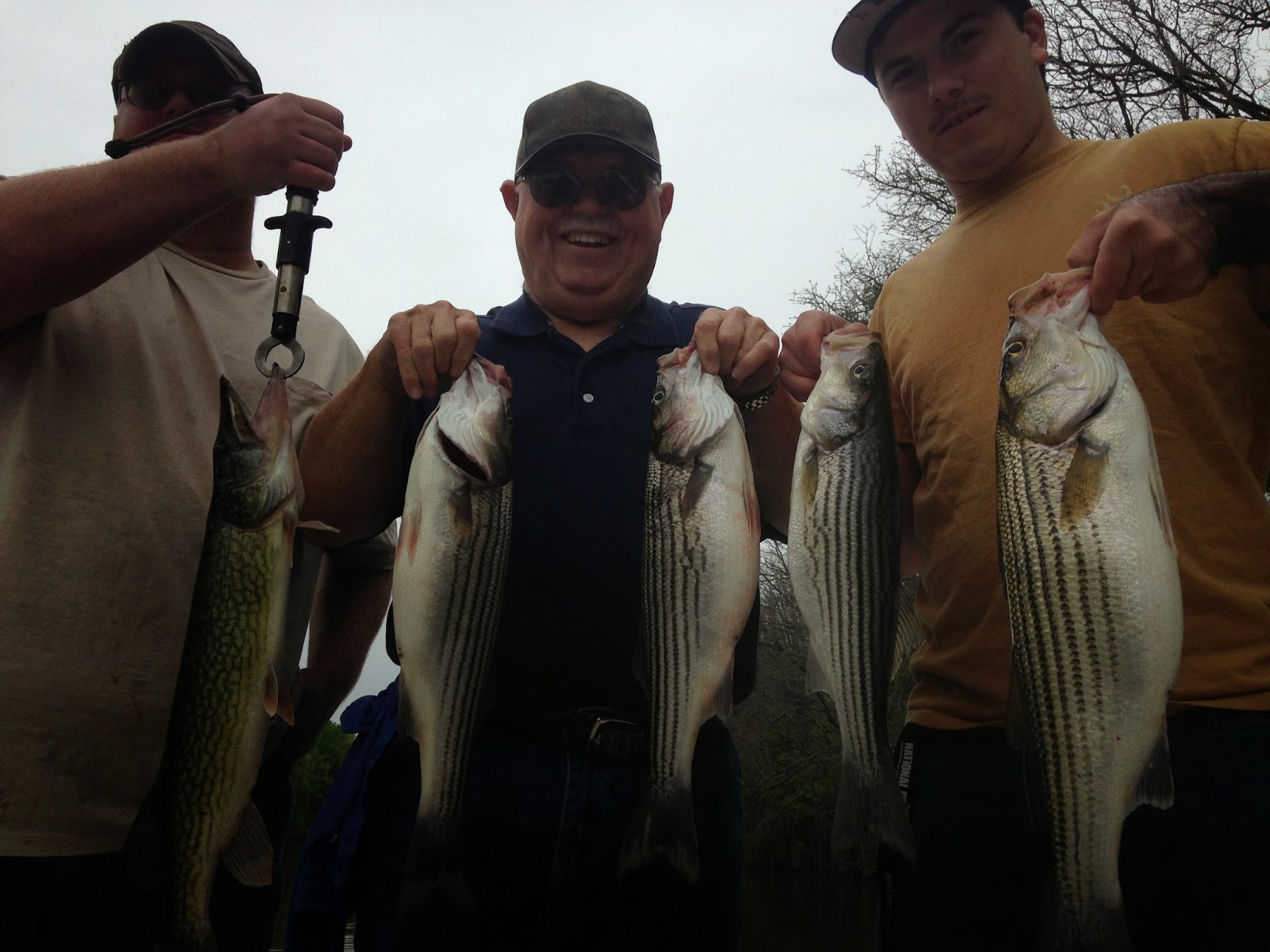 Saturday on the Roanoke 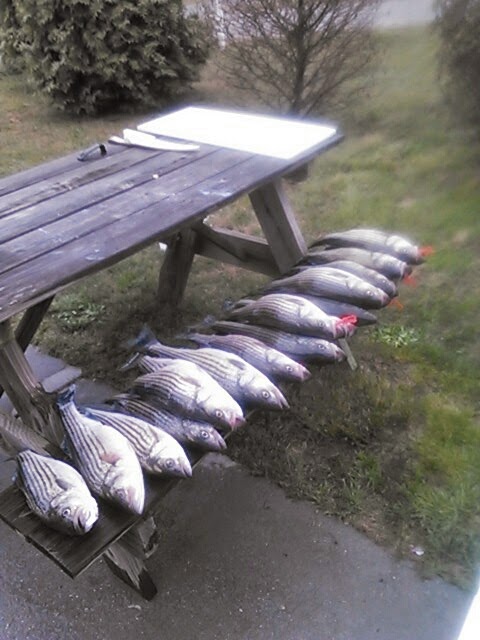 Meat for the table and my clients won the rockfish tourney to boot!!! -----Capt. Greg 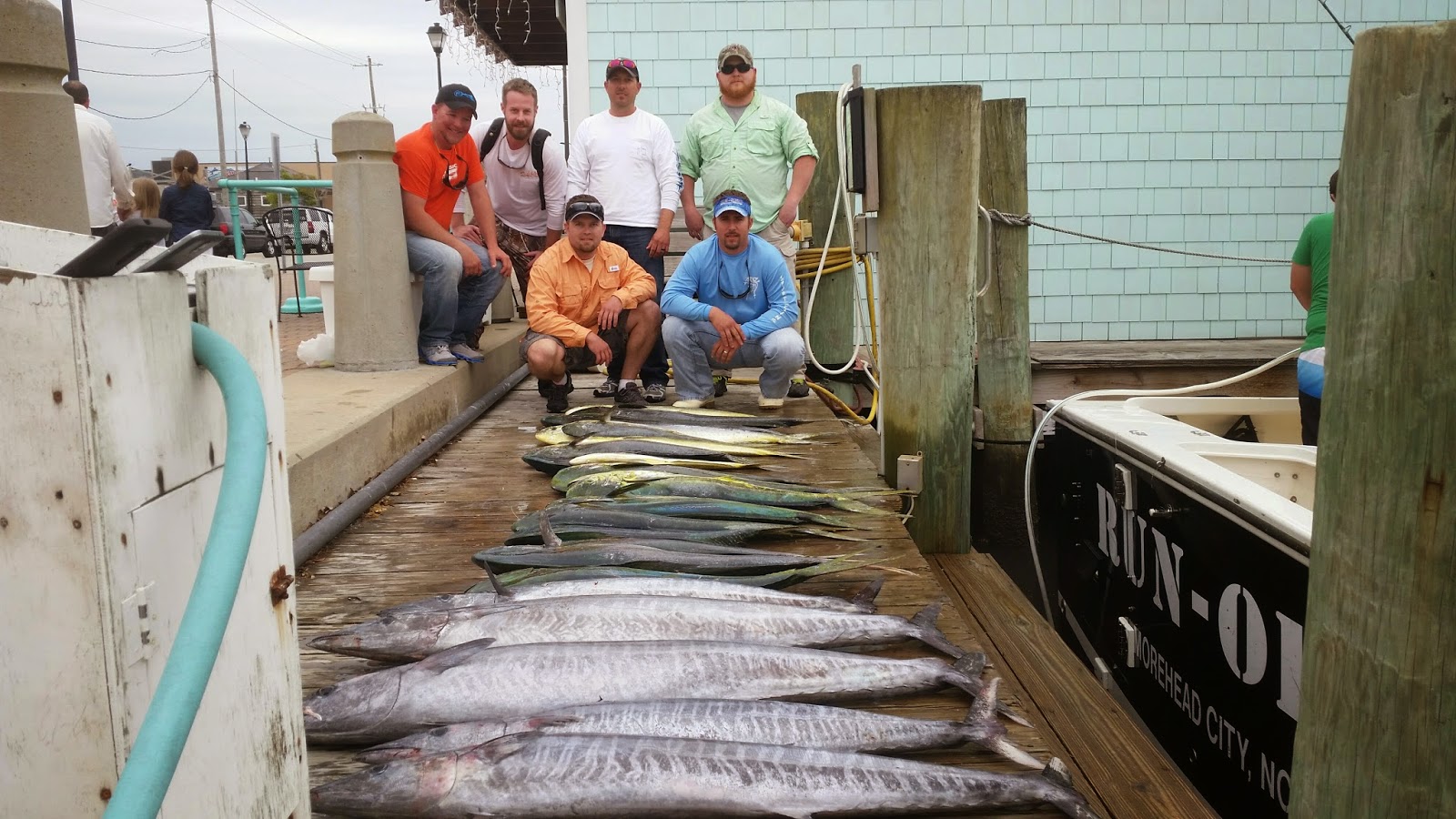 First seamount trip of the year on the Dragin Fly

I've lectured about not posting or promoting the crazy sailfish numbers that we have been having the last couple of years out of Los Suenos.   It's a real shame to have a group of guys who are thrilled with their fishing trip, each person catching 4 or 5 sails, only to be "disappointed" because they find out that someone else caught more than they caught.    Anything over 10 sails in a day is a "double digit" or "XX" day.   We are omitting the numbers in hopes of keeping everyone's expectations in check.I fear the same problem of unrealistic expectations can occur with our seamount trips, where we spend up to 4 nights and 3 full days over 100 miles offshore in search of blue marlin.    Anywhere in the world, if you catch a blue marlin, you've had a great day.   Many people have spent countless days and hundreds of thousands of dollars without ever catching one.   What is happening off the coast of Costa Rica right now is the best blue marlin fishing that anyone has ever experienced on this planet Earth.  Period. We are thrilled to be right in the middle of it.....Three days fishing:"Raised 25 blue marlin & one black;  catch 14 blue and one nice black marlin  9 sailfish, 3 yellowfin tuna on our first seamount trip of the season"    -----Capt., James 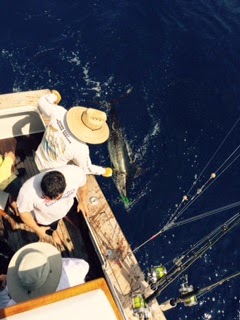 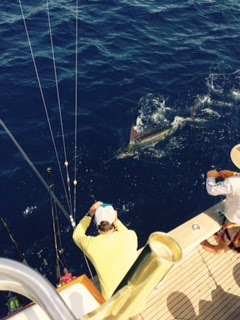 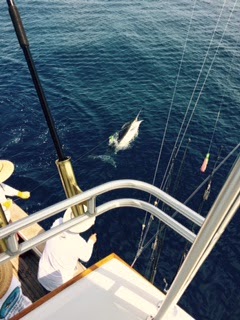 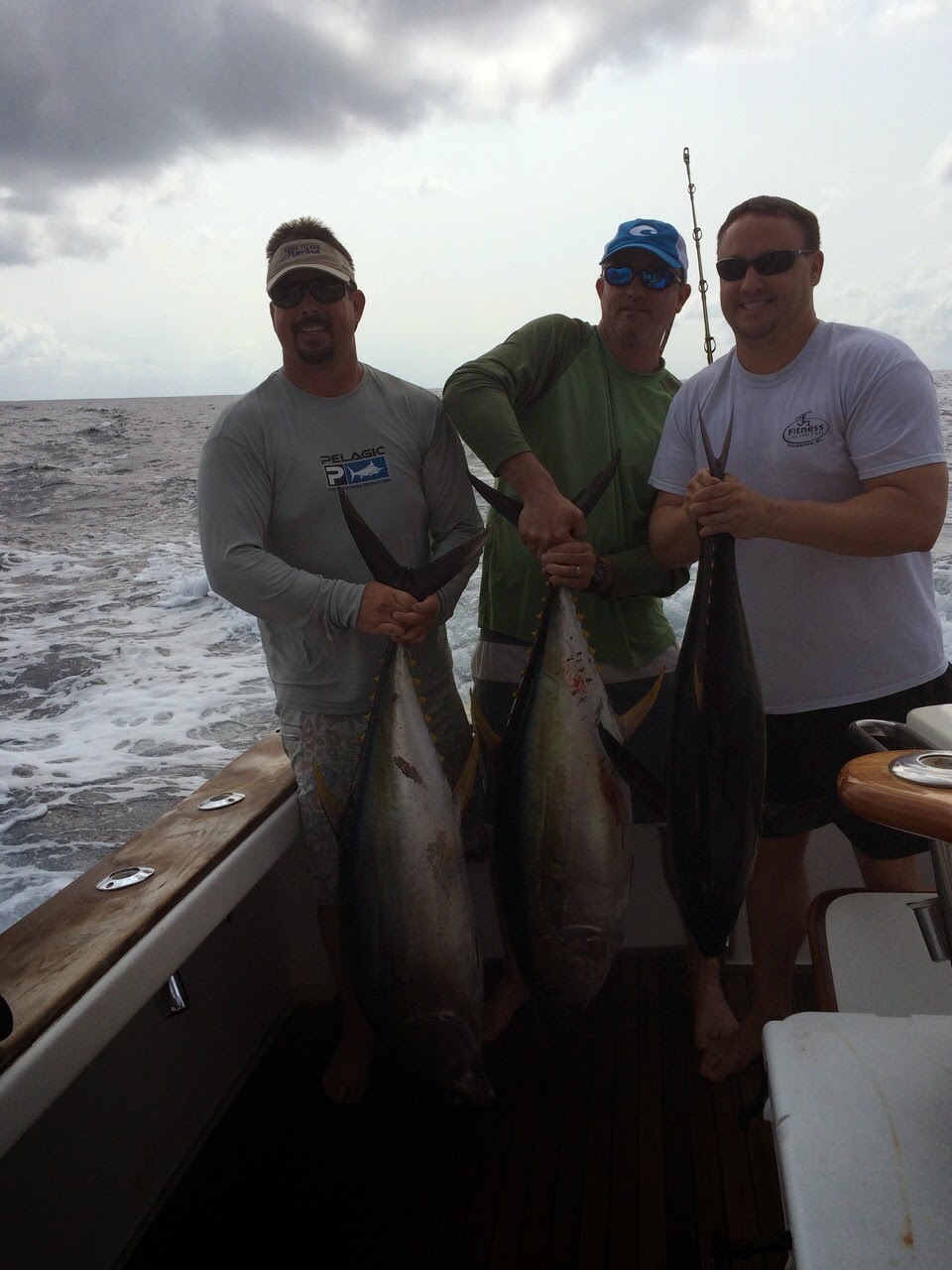 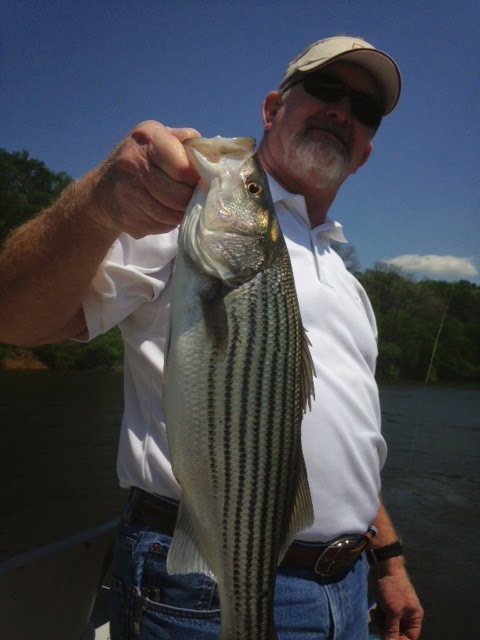 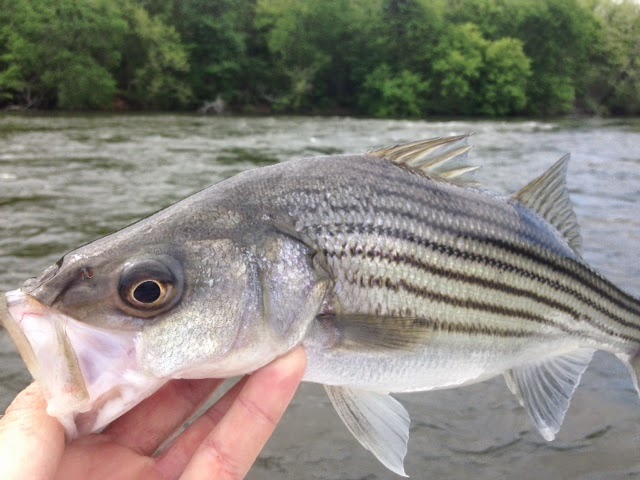 Greg on the Roanoke 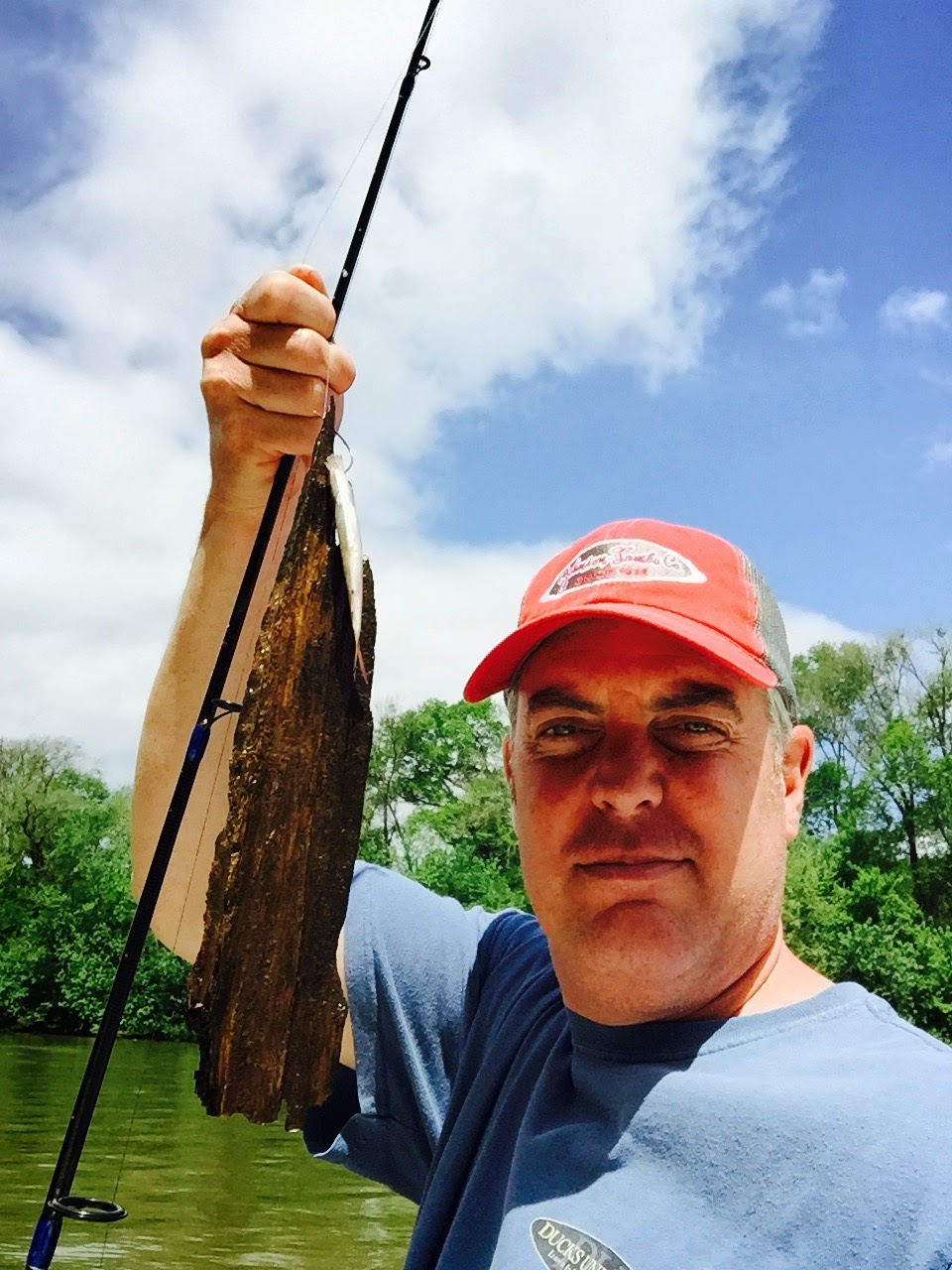 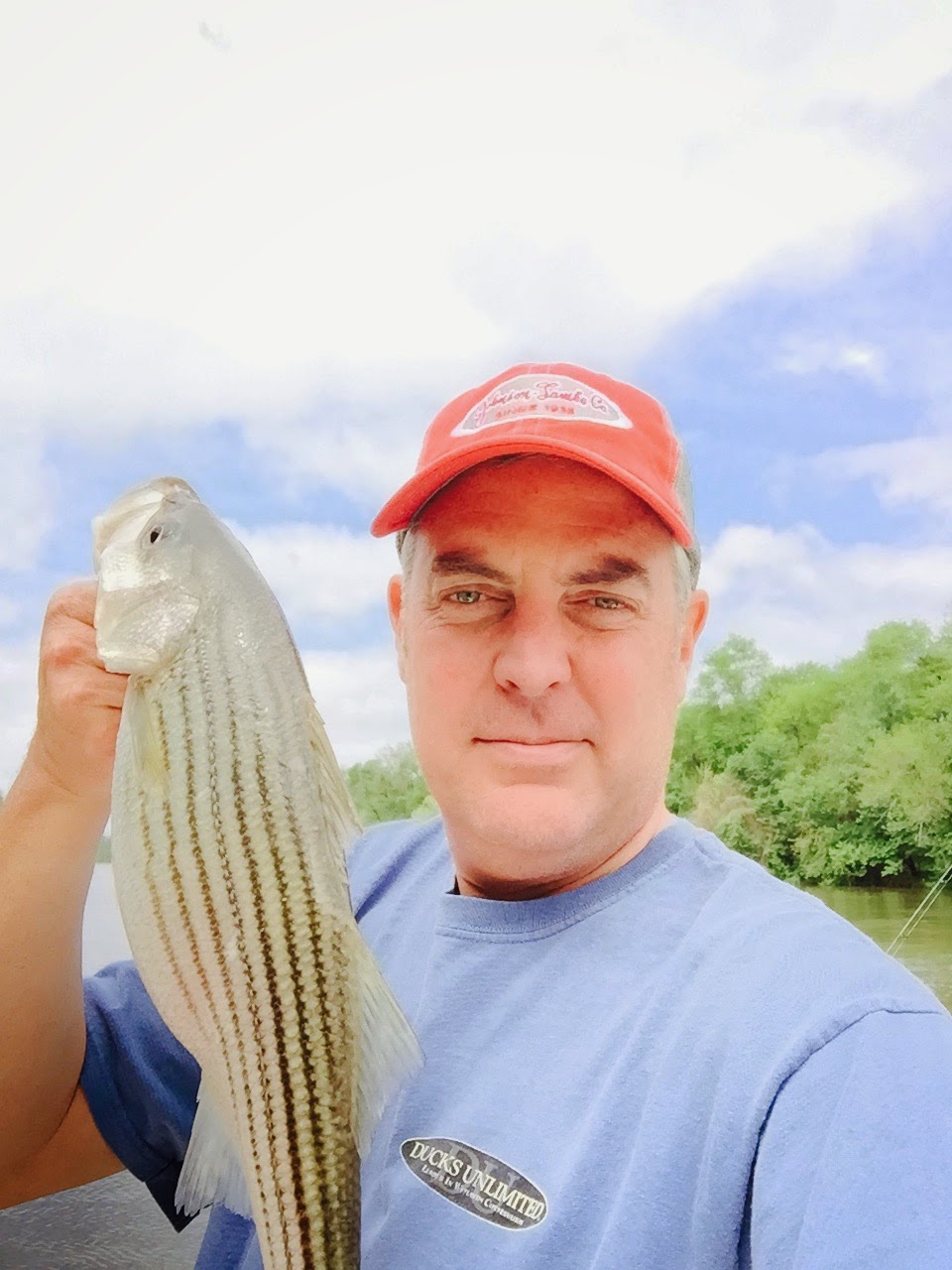 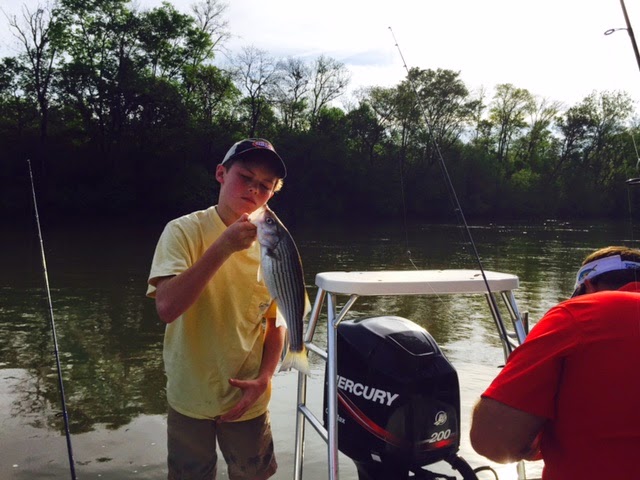 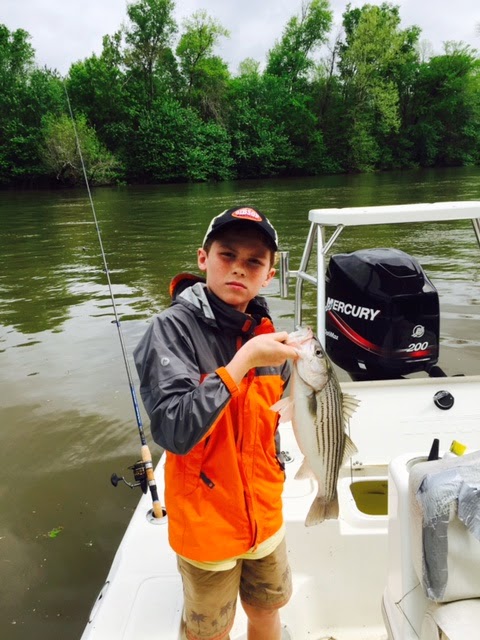 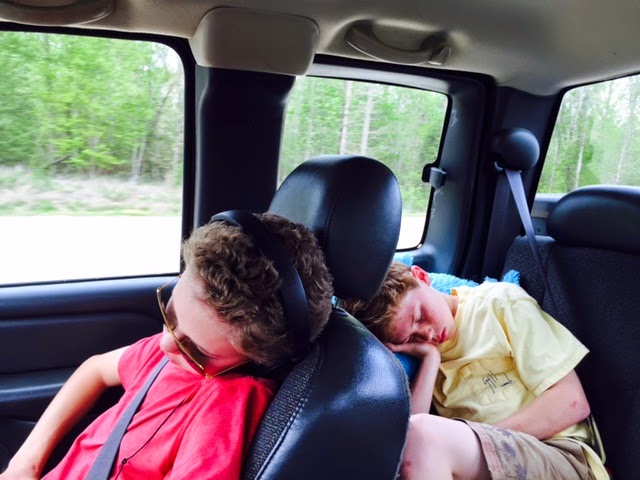 Left Quepos Costa Rica for North Carolina, meanwhile the Dragin Fly went to the FADs.  They called me last night, released 4 blue marlin yesterday.   I got back to NC and pulled together the skiff, grabbed Anna and hit the road up to Weldon and the Roanoke River.   Took about 10 minutes to get the first keeper in the boat.   Easy limit with 50+ throw backs and small keepers.   We're taking our limit up to the mountains, but will be back on the river soon.

Fishing looks to be really good.  Water is high and getting higher, so the good fishing should last through May.   You want in?   I saw Capt. Richard Andrews, Capt. Ponytail and Capt. Jennings Rose.....they were getting 'em.   Give us a ring and we'll get you rigged up with some of their very last openings for the season.

Don't tell anyone....but it looks like the triple digit days have hit the Roanoke.

"Hey, just letting you know it looks pretty good so far. We are catching plenty of fish on our half day trips. The morning trip had about 50 and the pm trip a few more . plenty of fish down river !
The big rush of people haven't come out yet so it looks like your fishing in May."
See ya soon, Greg

From the on line scoring, it does not look like we were able to pull it off today.  I'm sure that James went hero or zero, doesn't look like it worked.  When the numbers are tallied, I think that we're going to be in 4th place of the 70 charter boats participating.  Sea Fly, Epic and Tuna Bite all should be in front.  At least the Los Suenos crowd swept the top.

Lost ground but the wahoo and snook was good

We lost a little ground today, sitting in 4th place, 28 points behind the Sea Fly who is in third place.   Their 28 points was delicious, a 28 pound wahoo worth a point per pound and was converted into my sushi dinner last night.  Add 70 sailfish in 3 days and they're neck and neck with the Dragin Fly.

Our Los Suenos slip mate, the Epic is in 2nd with 15,400 points or 77 sailfish and Howard on the Tuna Bite is sitting in first with 79 sails.

Last year the Dragin Fly received the most points for 4 days of fishing,  but lost out to another 42' Maverick, the Frenzy.  For the top charter boat, only the best 3 days are counted, allowing all boats to participate, including those who may have been designated "back up" boats.   The Sea Fly has had two incredible days and are going to be tough to beat.

All 4 days count for the teams from around the world who have come to Costa Rica for the "Super Bowl" of Offshore Fishing.

Two teams of  Brasilians, both who practiced or fished on the Dragin Fly during the tournament are battling it out for 1st and 2nd place.  Our friend Eduardo Castro and his team are leading by only 100 points going into the final day.

Caught a snook today, hard to decide which was better, ir or that wahoo that has got us sitting out of 3rd place

Leader board hasn't changed much after day 2, we're still in 2nd, chasing the Tuna Bite who is about 10 sails ahead with 2 more days of fishing to go.

Dragin Fly is doing pretty good in the Offshore World Championship in Quepos, they're on the way home now, but from the live scoring, it looks like they're in 3rd place after the 1st of the 4 day tournament.  One of 68 different teams from over 20 different countries will be fishing tomorrow.

Meanwhile on the pink panga, the roosterfish bite was insane.  I was in the office.... :(

First showers of the season are starting to wash away the dust and green up the foliage which welcomes the Green Season.  Still great fishing, just lower prices.   Although I'll be back in NC soon, we've got a great team here in Costa Rica to take care of all the details. 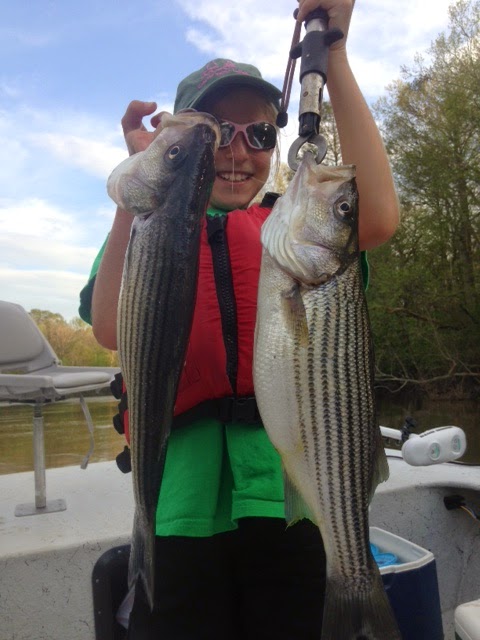 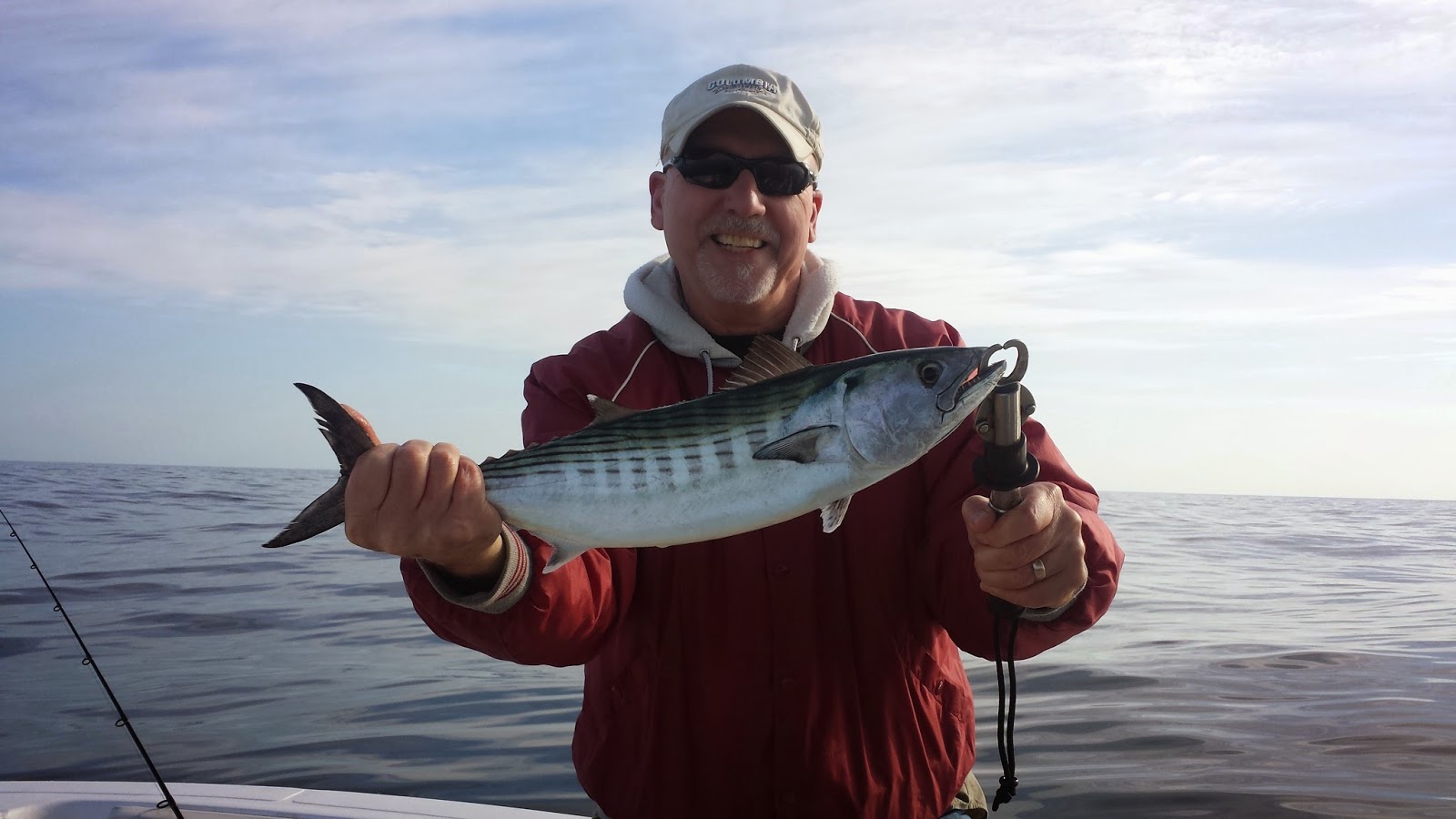 posted by Capt. George Beckwith at 9:38 AM 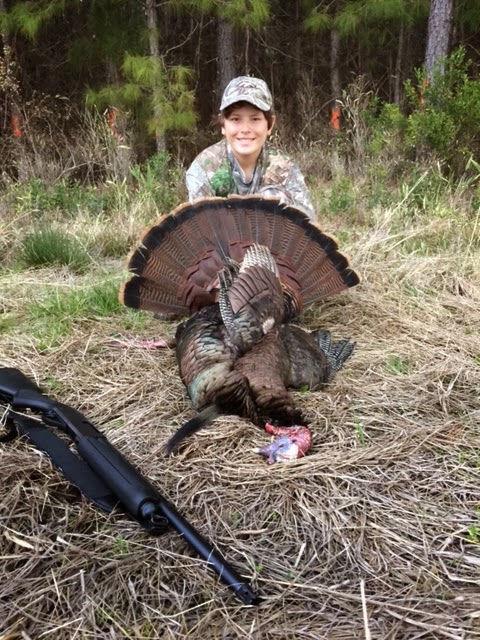 Capt. Mitch says that the stripers are REALLY firing off on the lower Roanoke. 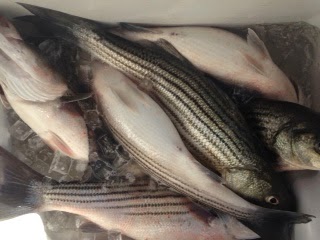