It's been windy, real windy, with the exception of yesterday. On Friday, Capt. Brian Harrington took some fresh mullet and took advantage of the wind which makes for real good puppy drum fishing.....and it was, catching better than 50 pups and yearlings. On Saturday, the wind laid down and it was beautiful on the East Side. There were plenty of albies and they were much larger than the week before, unfortunately, they were eating really small bait which made them a bit finicky and tough to catch. The day saver was a school of big drum, mixed in with spinner sharks. Under the sky-rocketing spinner sharks were the drums and they readily ate if you could keep up with the fast moving schools, marking them on the depth finder and dropping buck tails down to them.

More wind this week, but at least it's out of the right direction. It'll be tough on the East side, but NE wind makes it calm along the beach for the albies and rough in the river (good for the drum).

Albies continue to rock, also the king fishing is fantastic with limits coming in just a few hours. Lots of trout, but they're small. Capt. Ray and Capt. Gary are catching pups everywhere from the rock jetty at Cape Lookout to the Neuse and all points in between. Heck, I even caught a 50 pound cobia last week before heading to the mountains to watch some leaves change. The Down East Guides have a few scattered openings, but it looks like it's going to be a busy season, so I encourage you to get your dates on the calendar.

Other News:
BT-11 public comment period just opened. I implore you to send your written opposition to any expansions of this range and request that a complete Environmental Impact Study be performed. Some of the early information coming out about the contamination of this range is very disturbing and a complete study of waters and sediments INSIDE the range should be completed prior to consideration of any expansion.
You can send your comments to:
Richard K. Spencer
Regulatory Specialist for Military Projects U.S. Army Corps of Engineers Wilmington Regulatory Division
69 Darlington Avenue
Wilmington, NC 28403-1343
910-251-4172
Richard.K.Spencer@usace.army.mil

A little blustery today, no albies, just too snotty out there, so we hit the marshes and explored. We caught A LOT of fish, but not much of anything other than this nice pup. Although we may have lost a lot of trout in the freeze last year, before they died, they made a big crop of little ones that did survive the winter and are now 12/13 inches. I saw a lot of them here at MHC and Capt. Ray and Gary are seeing a lot of them in the Neuse. Looks like it's going to be a good trout year next year......if they don't get frozen. In addition to the over-size slot pup and little trout, we caught lizardfish, a sea mullet, a spot, several pinfish and a short flounder.......entertaining, but nothing red hot. 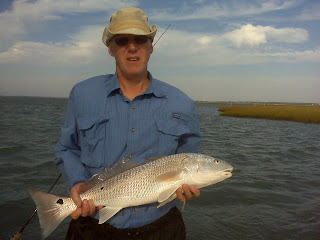 Capt. Gary on the other hand got to sight cast to a big school of nice pups on the calm side of the river, see below, perfect for the fly rod. Capt. Ray was burning them up around Point of Marsh, catching 30 or more slot and over slot-sized. 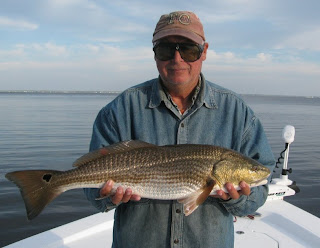 Albie fishing is as good as it gets. Shaping up to be a fantastic season.

Also, here is a friend of mine's blog, he lives in Africa now, pretty cool shots

.....are open Monday, Wednesday and Thursday 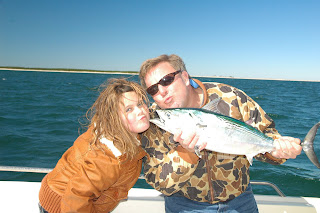 The albie fishing today was off the hook. Non stop action. Plenty of fish, it's as good as it gets. Never done it on the fly? You gotta try it. They say a bonefish hits the fly and runs 60 mph......an albie hits the fly running 60. 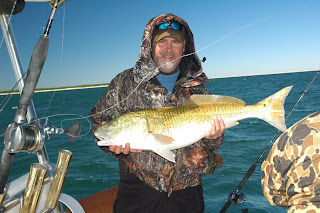 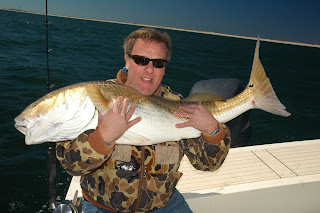 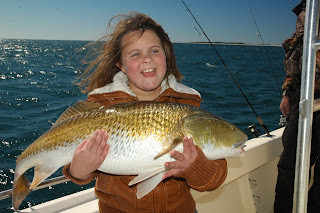 We put a couple of spoons on planers to catch some Spanish for dinner......double header.....guess what? Big drum. We ended up hooking 4 big uns and catching 3.

Meanwhile, Capt. Gary had a trout trip in the river, look what he ran into: 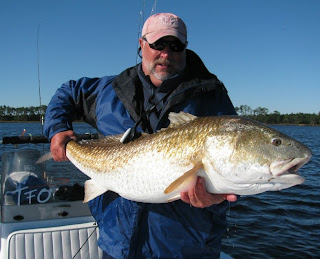 Congrats to Never Enough who stayed a few extra days tarpon fishing, totalling 44 tarpon in 6 days. Henry Frazier was just behind him, with 40 tarpon releases in 6 days.

Meanwhile, Capt. Ray had a great 3 hours of fishing for pups and yearlings, catching 44 and wearing his customers out in a short half day. 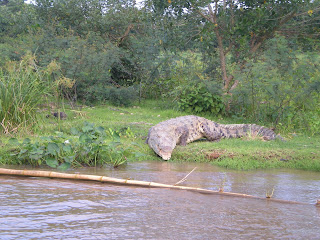 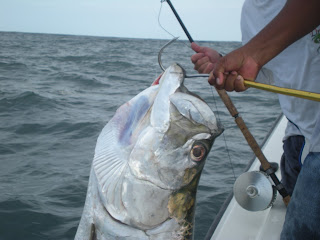 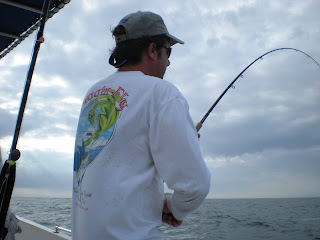 posted by Capt. George Beckwith at 8:14 AM

Warren had a tough trip fly fisihing for tarpon. He got his tarpon and a big jack on the fly, but must have been saving up his luck for today. We start off teasing a dolphin up, no bites on the fly, but James did hook him on a ballyhoo......I later put a little too much heat on him and pulled the hook.....guess I was still tarpon fishing. A few minutes later, the next bite is a sailfish on a ballyhoo, which I flagrantly sancocho, James hooks him up.....I pull the hook.

School of tuna on the horizen and Warren and I double up, one on a cedar plug, the other Dragin Fly. Another tuna on the popper/spinning rod and we're back to billfishing, looking that big marlin that was eating tunas on the outside of the school. No bites on him, but we did get a hot sail on the left teaser and Warren did an excellent job, great hook set, great fight and his glory shot.

Still getting a little payback down here. Dad caught another one on the fly today and took a jungle cruise this afternoon. I went and soaked some bait and took some pictures.....and added one to the release column. As a group, we caught 40 for 61 today....also a false albacore and a going-to-be-delicious-for-lunch-tomorrow 25 pound cobia.....nice surprise 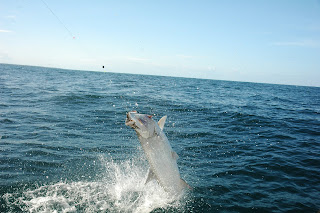 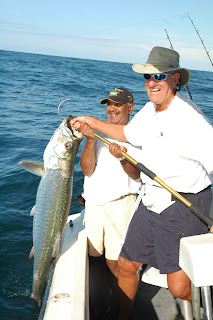 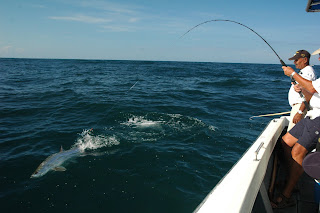 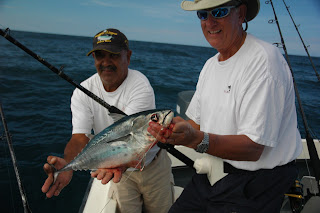 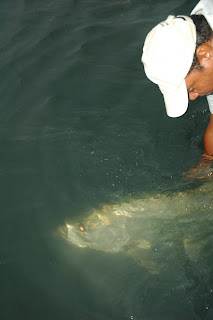 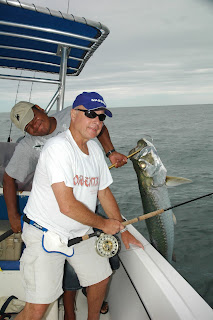 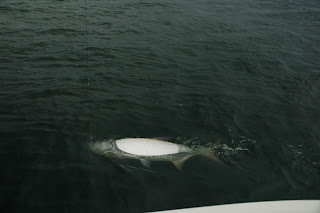 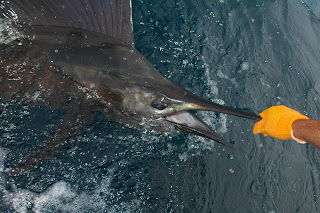 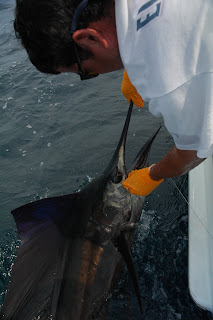 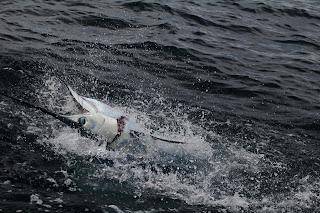 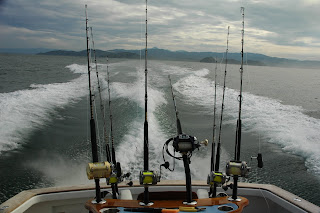 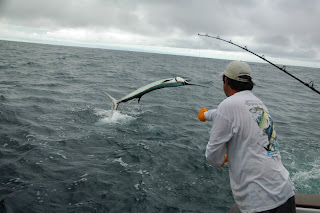 Yep, we're getting them. Dad added a tarpon on the fly to the marlin and sail he caught two days ago for a both coast slam. All but 2 of the 14 anglers on the trip caught tarpon today, as a group, we were 40 for 51 on day one. 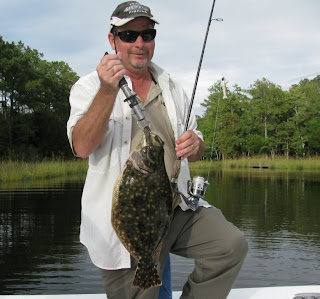 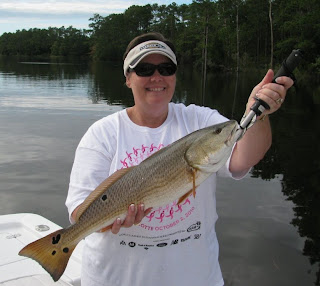 Time is right for fall fishing, on the coast, down south or up the creek....

Dad got a marlin