Send me an e mail and we will get you rigged up with some of the last openings these guides have available.

Thanks for the lesson Tom Cat

The last 2 NC tarpon that I caught (also my first of 2014) was with Tom Cat and it was me an him today when we caught my first 2 NC tarpon of 2015.   Plus a couple more that jumped off and a few big drum.   Really great afternoon bite. 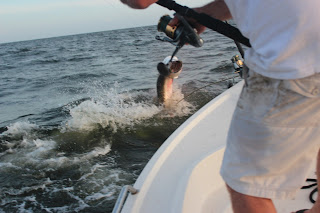 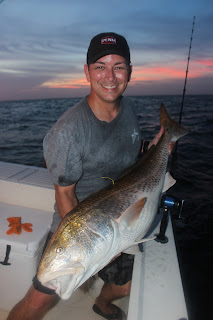 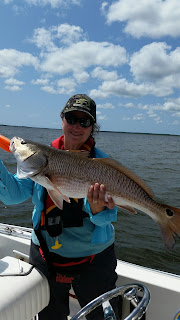 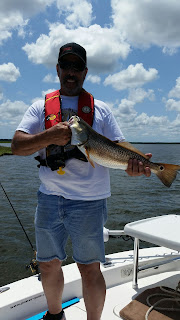 Grand Slam on the Fly!

After their first two 14 hour days of fly fishing at my Costa Rica "Blue Marlin Fly Fishing School", aboard the vessel "Dragin Fly", with Captain James Smith along with mates Berto and Marcos, Students (fly anglers) Guy and Elsie Anttila have more than reached their goal.

On Day #2, (July 28), Captain James managed to raise 13 Blue Marlin, and one Sailfish, behind "Dragin Fly", they teased in 8 Blue marlin for fly bites, while Elsie and Guy cast too, hooked, fought, and released 4 Blue Marlin on fly.

I must say that the fly fishing for Blue Marlin here is the best that I have ever seen, and that my crew aboard "Dragin Fly" are now experts at finding, teasing, and catching these magnificent fish on fly. Wow, what a team, we have figured out how to consistently catch these awesome creatures on fly, while using 20 pound class tippet. This "Blue Marlin fly fishing school" still has one more day left to catch more marlin, I will send you a report tomorrow, with lots of great pictures. I love my Job, wish you were here.

.....from the Neuse.   I finally got out there and felt like I was close to a tarpon, although I never saw one or got a bite.   We fished 4 different places and caught a skate in each location, saw plenty of bait, but no silver.   Instead of giving up at sunset, on the way home we made a quick stop on the edge of one of my favorite shoals and it didn't take long to get a bend in the rod.   This time it wasn't a wing beat but a head shake from a big drum.   We had 4 bites in about an hour to save the afternoon.

Although we didn't see a tarpon,  it's nice to know that there are enough drum around to save the day.

When Greg grabs you with both hands..... 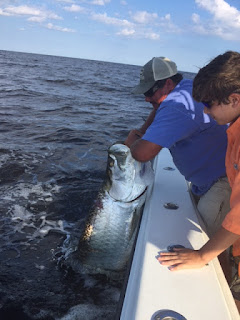 Congrats to Greg, Merritt and Tag a Long Dan.

2 for 2 NC tarpon in one day is something to remember, especially these days.... 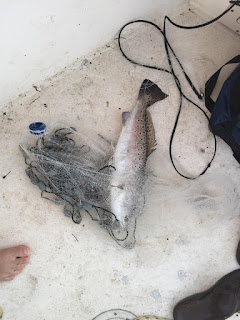 I hope to get out after the tarpon this week, next week I have to go to Costa Rica and help out with their marlin problem.   Some outrageous numbers coming from the overnight trips.  James' last trip, 3 days, they raised over 40 BLUE MARLIN.....I gotta get me some of that.  Here are some pics: 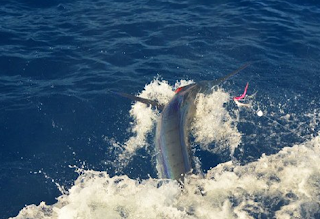 posted by Capt. George Beckwith at 1:46 AM

"Well this was the best trip to the seamounts so far for this season,  raised 41 blue marlin,   17 bites on the fly,  catch 4 we also had two sailfish up on the spread but no bites and no release, just blue marlin"  ----Capt. James

fly fishing for blue marlin on the Dragin Fly 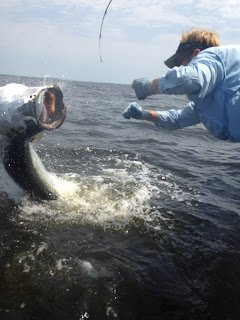 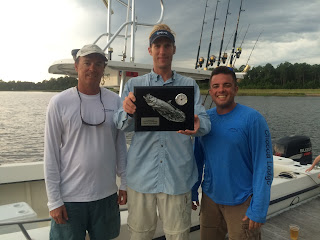 Congrats to Capt. Mitch Blake, his one tarpon was good enough to beat out the best of most of the best in the local tarpon tournament held this past weekend.   Although tarpon were seen from Oriental to Bath and throughout the sound, he was the only one to get a bite and get it to the boat.   Couple of the teams did get into some pretty cool sight casting at tarpon under ideal conditions, but the only bites they got were from the more aggressive 30-40 pound drum that took their baits before the tarpon got to their baits.

marlin on the fly on the Dragin Fly

Had a great time. Greg was great with the kids........ We had blackened redfish for dinner! 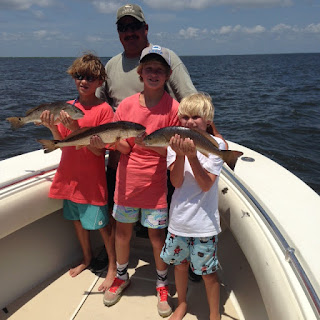 Still having triple digit days on the ducks (2 hunters)  and things are going great in Costa Rica.   On my way home tomorrow, back to the heat.......

After catching the tunas and a few sails on the Dragin Fly, this is the report from the inshore fishing on the pink panga:

In short, roosterfish, snapper and a 36 inch snook, not a bad half day.

No, but I will take on the winner of this weekend's tournament for a title match the following weekend. ----George


Don't tell me you are coming back to fish the tourney...... 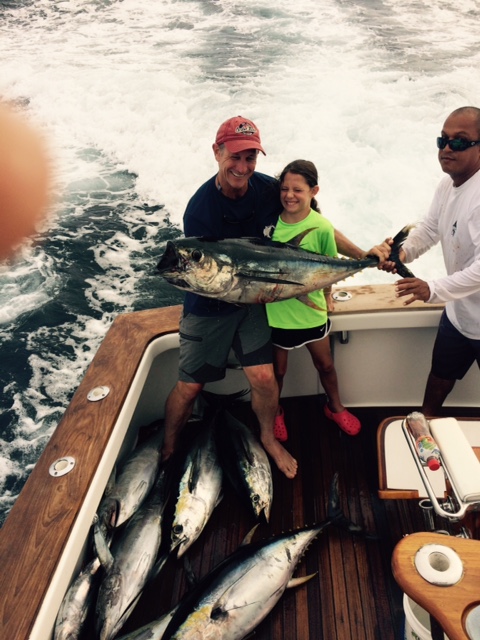 I'm back at our duck lodge, picking dates for next year!   We just had the wifi connected and I'll be working from here.   Maybe I can get out there for another round at the ducks.

I will be back in NC next week and still have a few openings if anyone wants a shot at a tarpon, I can't get them jokers off my mind.   BUT, I am going to Costa Rica to get on some of the above action.  Catching tunas that size on poppers is one of my favorite things to do.  While I'm there, does anyone want to go the seamounts and catch their marlin?  Aug. 10-14 are the dates.  Shoot me an e mail if you want on the boat.

1000 doves in a day club and tarpon report

Congrats to Watson Jr. for joining the club, shooting over 1000 doves in a day.  Not an easy feat, especially this time of year when the days are shorter.  One more morning shoot and we're off for more ducks.  After everyone gets settled, I'll be heading back to harass the NC tarpon.  I got a note from Capt. Phil that he put another tarpon to the boat today.

His one gun hunt 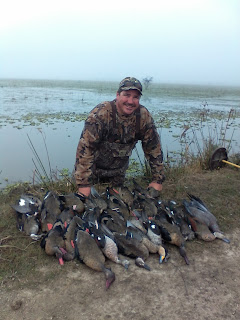 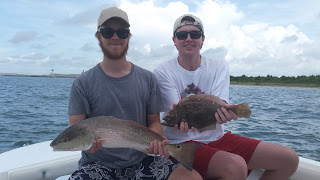 Greg Voliva. is on his way home to do some first hand investigating.   We stopped in Cordoba on the way to the airport for a quick shoot, only one hour.  Between the two of us, we shot a case of shells (20 boxes of 25) and ended up with 212 doves.   I'm glad that it was an even number so he can't say that he out shot me again.

I'll be a little more responsive via when back in Cordoba in a couple of days.  Going to take a break from the doves,  but right now, it's all about the ducks and I'm having a really good time.  Hopefully I'll have some pics if I can put the gun down and pick up the camera

6 of us stopped in Cordoba for quick dove hunt, totaling about 1700, then a couple of days with the ducks where we've shot nearly 500 in 2 days.   Everyone is having a great time.

Bull Sharks in the Neuse

George,
Yesterday about 5:30 PM while swimming with my 9 year old daughter just a mile south of marker 19 (5 miles south of NB), an 8-10 ft bull shark swam 10 feet from us.
With all the shark paranoia lately I just couldn't believe my eyes. It stayed on top of the water about a minute. I was able to climb into the boat and then pull my daughter off of the raft into the boat then climb on top of my hardtop and get a better look at it swimming away.
I've seen plenty of sand sharks, spinner sharks and other sharks but this was different, it was the fattest shark I've ever seen. The dorsal fin was about a foot long but not as tall as the other sharks I've  seen. At first I just kept thinking oh it's gotta be a group of skates or something else but it was so close there was no disputing that it was a big fat bull shark.
----Patrick

..... that there is a really good striper bite up at New Bern.  It is catch and release and my guess is that it's pretty good topwater action if you can get out there early.   Lots of short trout and flounder in the lower river and he's catching some sheepshead at the beach.

"Hugh and Yates with a double header of nice 30 inch Red Puppy Fish. Had about a dozen of those and 3 nice flounder on a 3/4 day. Trey has been doing good on the smaller ones up the river"  ----Capt. Ray 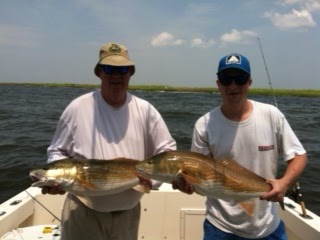 After getting back from Argentina in a couple of weeks I will be available for charters out of Oriental July 23-Aug. 2.   Before and after, my Parker will be run by one of the other Down East Guides.

With good tarpon reports, maybe this is the year for it!  Shoot us an e mail now to get one of these few available dates. 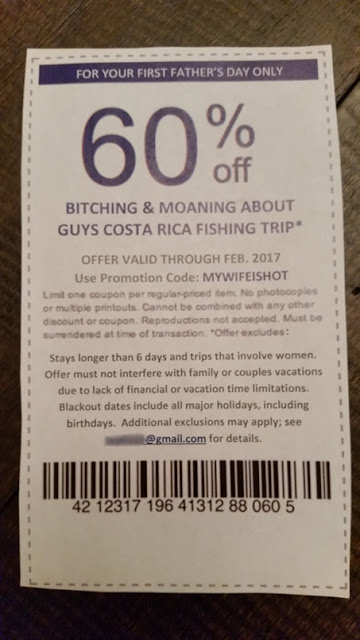