The boys were working hard this afternoon, getting everything together for tomorrow. We slipped out today and quickly hooked a marlin and 3 dolphin......hopefully we'll get a bunch of marlin over the next 3 days that are as hungry as the ones we've caught the last two days.....

Just thought that I'd ask. Beautiful here, plenty of gaffer dolphin up to about 40 pounds......also a few marlins swimming around, hope to see some more of them on Thursday, first day of the tourney. We beat down a nice stripey today, saw another and a few sails, but didn't get the bites.

much better day today boss we find the blue water raise 4 sailfish and 1 blue marlin but didnt catch any of them. marlin didnt bite and we jump off two sails. We end up catching 6 yellow fin tuna one nice one about 100 lbs plus and 5 small ones.....Capt. James.


I'm heading down that direction tomorrow to straighten things out......

The report and what's coming up.

Few albies along the beach, enough for a shot. With decent weather, there should be enough to chase after for the next few weeks.

Small trout everywhere from New Bern to Cape Lookout with patches flurries of nice 'uns. Capt. Charles Brown had a limit of 4 pounders the day before Thanksgiving. That good fishing will last until we get a hard freeze. Water temps are warmer than last year, mabye we'll get a break.
Stripers up at New Bern are very consistent and will be through the winter.

Wahoos in the bluewater. Along with a few dolphin, tunas and sailfish, the offshore fishing out of MHC is pretty good.....if you can get a pretty day.

Costa Rica.....Heading that direction on Monday to fish a couple of tournaments. First, the Los Suenos Marlin Invitational, Dec. 1, 2, 3. Wish Team Dragin Fly the best of luck. I'll be reporting and posting pictures from Costa Rica next week.

posted by Capt. George Beckwith at 6:14 AM

We got the call from accross the woods. Aisha was occupying the "cat bed" on the deck of a very concerned cat owner's house. 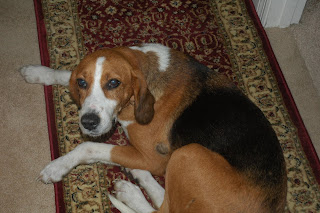 Did I mention that she was up for adoption? CALL NOW. 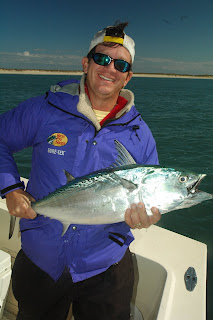 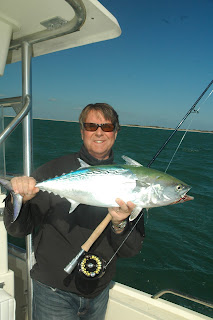 posted by Capt. George Beckwith at 8:05 AM

Capt. Joe Ward report and me from the beach

MHC Saturday morning:
Little albie show the last couple of days, tough to get on, but we beat down a few, plenty of little trout with an occasional keeper.

On a side note, I'm in the dog house. When taking out the trash, I left the yard gate open and watched Aisha make her exit....nose to the ground and into the wind. Now healthy enough to run deer, this hound dog is on the hunt. We'll see if her nose is good enough to get her back to the food bowel. In the meantime, if you see a wandering hound in the MHC area.........

One week ago today, I arrived home from a day on the water to meet my wife Anna who was on the way home from Raleigh, I arrived with much more to greet me.

The garage floor was soaked and Anna had a "cat that ate the canary grin". She said that she had to give the dog a bath....why in the garage? So it wouldn't run away.

Apparantely running wasn't an issue with this hound. Immaciated, dehydrated, tick-ridden, full of worms, ear mites, no collar and on the side of hwy 70 between La Grange and Raleigh. My initial assesment was correct: this dog would not hunt....probably slowed down by the heartworms and ribs nearly poking through her lose skin.

Fast forward one week, a trip to the vet, a bag of dogfood with fish trimmings and "Aisha" is now parasite-free.....minus the heartworms which the vet recommended to deal with after she gets on heartworm medicine. Aisha has also learned some manners and lessons such as sitting, staying, coming when called and walking on a leash...... also wagging her tail, which was a trait long out of practice for this dog.

For a dog that obviously has not been spoiled, living with Anna and our fat lab Shamrock, it hasn't taken long. She is now napping in the house and has learned that there is more to life than dry dog food and heavy hands.

She is about 6 years old and very low maintenence. Anyone interested?

posted by Capt. George Beckwith at 9:23 AM 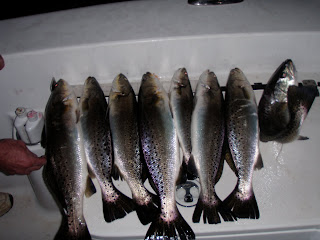 posted by Capt. George Beckwith at 8:30 AM

.......but there aren't many of them. The bite is slowly improving.
Still really good up the river for stripers/specks and Costa Rica is firing off. Offshore of NC, the last two days have yielded excellent fishing for wahoo, also a mixed bag of dolphin, tuna and scattered billfish bites. Capt. Chris has had a good couple of days on the groupers. The weather has been fantastic.

posted by Capt. George Beckwith at 7:19 AM

Stripers and specks continue up the river.

Albie fishing continues to suck......although I did see a few today.

In Costa Rica....from Capt. James: "the fishing is picken up. the guys ben geting between 10 and 15 bite per day danny catch 4 marlin yesterday 1 blue and 3 stripes"

It's killing me not being there......couple more weeks. Want some? Give me a ring.

The Roaonke will not be the same without Capt. Jack Eudy who quietly passed this week, sitting in his recliner, empty bowl of ice cream in his lap.

"It's difficult for me to consider fishin' the Roanoke around Weldon without his being there........as.......he was always there; if not in his boat, chatting with other fisherfolk in the parking lot. Most of you included in this send are fully aware; others, I included, thinking that perhaps you were able to meet him at some point while flingin' flies for shad or stripers in the spring. Dang! I'm certainly going to miss our continual banter, sharing of info (and flies).......and all of the parts of Capt Jack that made him so special to us.

Weldon, simply, won't be the same place without him........but! I have tucked away one of his "special American Shad flies"; I'll tie some up over the winter and post them on the Triangle Fly Fishers site and other sites, as I can attest to it's ability. One slow shad fishin' afternoon late in the season, I had pulled the boat back up at the ramp, seeing his truck perched there ( a common sight to those not familiar). He asked if I had ever caught a "White Shad" (American Shad) around Weldon. After my negative response, he offered up an interesting red over yellow maribou pattern with a gold braid body wrap.....stating, that he felt some "white shad" were in the area. After proper thanks, I opted to re-enter near the ramp and fish the far side across next to the current seam....tying his bright red/yellow maribou thingie onto a 350gr line....as nothing else was going on. Within several casts I hooked what I thought was a small striper (given that it was late Mar/early Apr?)......to my amazement, I had landed my first "white shad/American shad" (probably 2.5-3lbs) at Weldon with Capt Jack watching from his perch at the ramp. I held it aloft to him, and was able to see his "thumbs up". I will treasure that memory, and many, many others of him every time I enter the water there. It will be very vacant for me, to not share a smoke...or some banter and info, general bitchin' 'bout conditions and such....or areas that have been productive. He will most certainly be missed. I suspect that I and others will "feel him" there on the water this coming spring. "You da Man", Capt Jack......we'll miss ya!! JimBob

posted by Capt. George Beckwith at 5:58 AM

.....and no albies. A little change in wind direction is in the forecast, hopefully that'll shake things up. Plenty of trout and stripers up the river. I played with them for a little while this afternoon with Capt. Wayne.

......but the water is getting cleaner. Seems like the albies got blown offshore, hopefully they will be pushing back as things clear up......or things lay down enough so that we can go get 'em.

Dirty water here, dirty water there, but more fish there

Dirty water in the ocean and the sound, that Gale really shook things up. Hopefully things will clear up and the albies will go back to snacking. Still some good fishing up the river with specks and stripers.....and down the river, Capt. Brian went puppy drum fishing and got 'em really good.

This was one Saturday that I was glad that I didn't have to be on the water. WOW! What a gail. The winds and seas are laying down. This Noreaster should do nothing but fire up the fishing....which has been pretty hot already.

Capt. Chris Kimrey still has some openings this week for fishing out of MHC, he had a good day with the albies on Friday and caught a 54 pound king on Thursday. Capt. Gary and I have a pretty busy week this week, but both of us have openings next weekend. I am wide open the week of Nov. 14-18.

Capt. Joe Ward and Greg Voliva will be availalbe for some of those speck/striper trips up the river. If you want to get out there, drop me a line to make it happen.

Capt. Gary albie pics from this past week 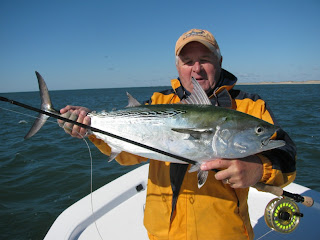 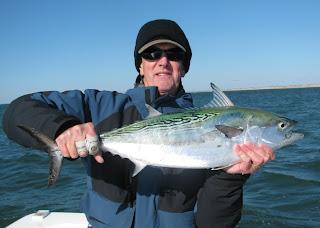 posted by Capt. George Beckwith at 7:58 AM

Fishing in a Gale and Trout

Yesterday was about as rough as it gets, but we still got the albies. Lots of fish showing up now.....

Capt. Gary abandoned the albies and ducked in behind the outer banks for some MHC speck fishing. He got 'em pretty good.

The day before, I mohawked the specks. That's right, Capt. George limiting out on 20 inch trout. You know they were thick! We did catch a few at the rock jetty which is beginning to fire off, but we did not hit the mother load there.

Up in the river, Capt. Joe Ward is doing what he does best, laying out a mess of stripers and specks on the deck: 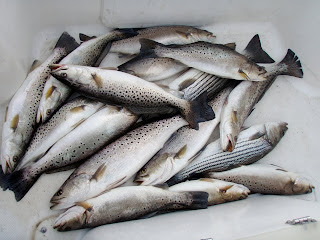 posted by Capt. George Beckwith at 7:36 AM 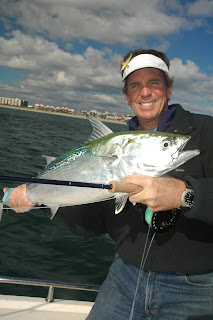 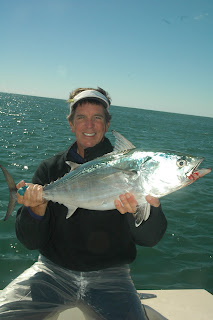 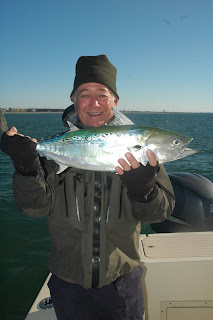 There are plenty of fish around, scattered up and down the beach, from Bogue Inlet to the Cape. They're feeding on spearing/glass minnows, which means they are a bit finicky, but if you can get the fly right in their face, they'll eat it......problem is getting the boat in position and the fly in their face, which can be difficult with 15-20 mph winds. Fortunately, the wind has been from and forecast to be from the north which means that conditions are relatively calm along the shoreline.......venturing too far offshore is not an option.

The versatility of the spinning rod opens up some more shots and more fish.

Conditions up the river on this wind are actually pretty good for the stripers and trout. Plenty of places to get out of the wind.

The Down East Guides have openings through the weekend for albies or if you want some fish for dinner, I'd recommend a trip to the Neuse.

posted by Capt. George Beckwith at 6:44 AM