After 3 days on the Dragin Fly, I've had a lot of catching up to do in the "office".....at least I can hear the waves.  I started writing the overnighter report, but I can see that it's going to take a few posts.   Here's the report for Day 1 of 3.    For the recent report over the past couple of days,  the water within striking range is clearing up a bit and we raised a dozen sails today, with all 6 of our anglers catching at least two sails each over the past two days......we're getting closer to those double digit days.   I did sneak away with Timmy on the Tres Amigos and Greg from Tanner's Tackle shop for a daylight snook bite.  No crocs, but I did get tumbled by a giant wave that broke over my 9 ft surf rot......oh, no snooks either....but I'm still not done with them yet.

Three Days on the Dragin Fly:
Day 1  On board was Larry and his son Chad, Dragin Fly crew, plus Wade, the cockpit wizard of the Bill Collector and myself.  The plan was to fish our way out to the Furuno, picking at the sailfish along the way, live bait for a black marlin, then anchor up and jig snappers till dawn,  fishing our way offshore the next day in search of the big bite and spending the night right on top of it.   All good plans don't work out as planned......but with good planning, it usually works out.

When we charged out on our over-nighter 5 days ago, there was a lot of green water around.  Decent numbers of finicky sails were lazily paddling around those waters, but the bites were few and far between.  The best sailfishing was between us and the Furuno, so after a mid-morning departure, we ran right to the fleet and quickly put some sailfish in the air.

After several sailfish releasse, but with marlin on our menu we started trolling towards the reef for a couple hours of live baiting black marlin before it got dark.  Just like similar reefs in Panama, black marlin routinely feed up on the edges of the Furuno where the peaks of it's jagged crown drop from 150 feet of water down to 400-600 feet, then plunging to the abyss.   All this structure 40 miles offshore, you can image the kind of life that accumulates around it.

Within several miles of the reef, the billfish bite fell off, but our hopes remained high as we filled the tuna tubes and bridled up live bonito.  We trolled 3 marlin bites through prime habitat, continuously replacing spent baits with fresh ones.   While trolling around, James found some peaks in 400 feet of water with clouds of life on the bottom; in that depth of water, most likely big groupers.   With no meat fish, a couple of quick drifts with the deep dropping rods and we could have dinner in quick order.

After only three drifts, we had six 15-30 pound bucket mouth grouper on the deck, the live bonitos back out.....and still no billfish bites, not even a sailfish.....which like bonitos as much as marlin.

In past trips to the Furuno, as the sun set, the reef has come alive with snappers of all flavors, but when we gave up on the live baits and concentrated on the bottom fishing, we just could not get on a good "mark" and never had a single snapper bite.   James made an executive decision.

Instead of anchoring up for the night, then starting out again early slow trolling before heading offshore, James instructed Berto and Marcos to put out 3 lures.....in the dark.   We were going on the troll and were going to wake up about 60 miles away, hopefully in clean water.   With a full moon, who knows, maybe we could get a night time marlin bite......at least a sail.......or do they feed at night?   Swordfish definitely feed at night, but will they eat a lure at 7 knots?

posted by Capt. George Beckwith at 3:58 AM

Actually two nights.   We're heading out tomorrow on the Dragin Fly......not sure where we're going to end up.  Plan is to sailfish our way out to the Furuno Reef and anchor up for the night, taking advantage of the snappers and groupers, then steam out to the sea mounts after the mid-night bite.  Should wake up in the vicinity of a beautiful color change that came up on the satellite. .......marlin on the menu, but we'll take what we come across.   Another night drifting in the deep for swords, then work our way home. 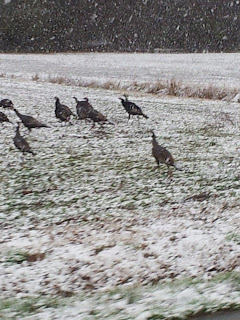 posted by Capt. George Beckwith at 6:01 AM

Slow again today, the water is clearing up out there but more fish are being caught in the dirty water inshore.  Heading off of Cabo Blanco tomorrow looking for "Him". 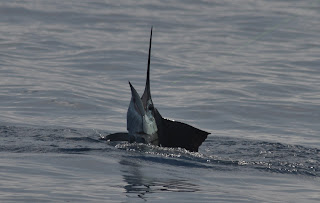 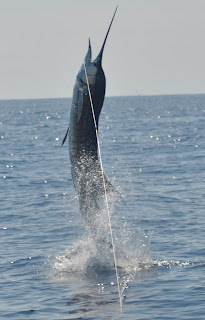 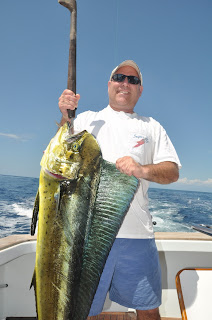 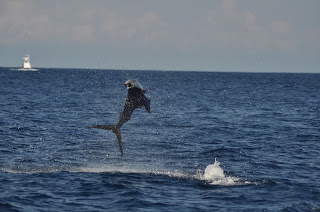 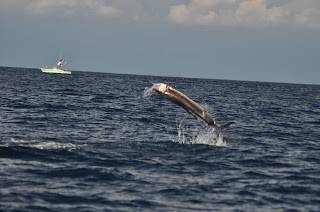 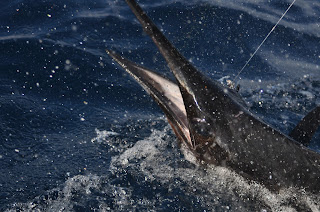 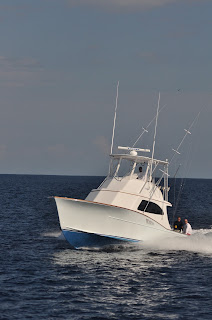 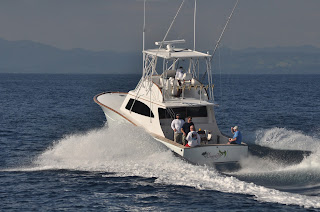 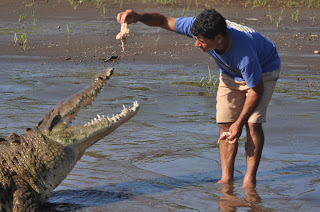 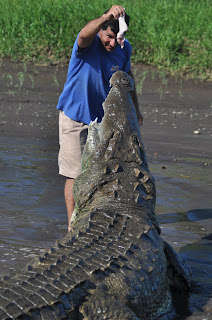 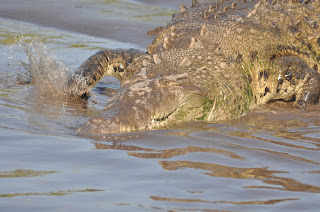 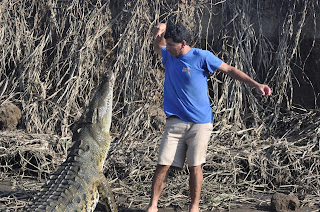 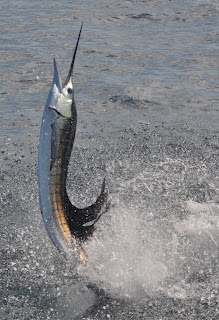 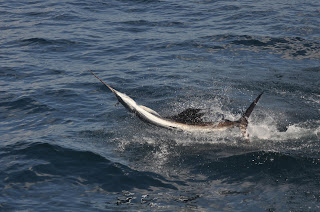 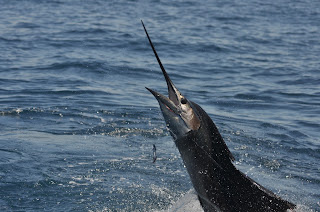 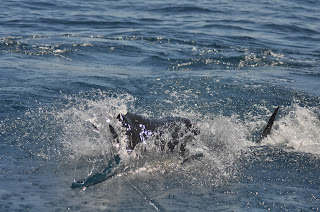 If you've got a pink boat, you better catch a lot of fish.   Heading out with Roy on Sunday, looking forward to it. 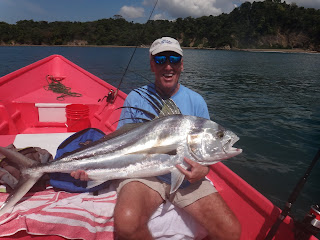 "It's been triple digits on the Stripers along with some Shad.  Perfect fishing for the fly and light tackle anglers!"......Capt. Mitch Blake

Not into hunting, give us a shout if you need a fish fix.
info@pamlicoguide.com 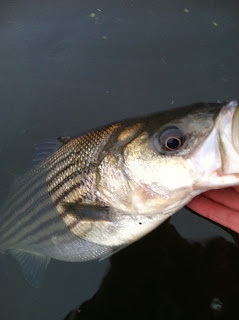 Yes, it's still hunting season in NC with liberal limits on snow geese.   Capt. Greg is putting a few groups to go up with Watson.  Drop us a line if you want some details. 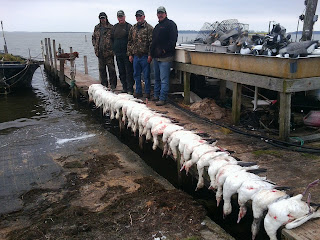 .......and cool underwater go pro video of sailfish and dolphin if I can ever figure out how to edit.....

Water offshore is clearing up, at least it's not red, had 15 shots today and caught 7 sails and a couple big dolphin.

Green going Red and my snook

Got a slug of nasty water moving through, went from green to red overnight.  Still some fish in that nasty water and they're biting, but these are NOT ideal conditions.

I did get a snook today, but with Capt. Roy on a panga......as my surf fishermen buddies tell me about big drum, it just ain't the same doing it without your toes in the sand.

Between the two pangas, we had more than a dozen roosters, as many if not more jacks, a couple of snapper, including one about 15 pounds........and a snook about 7 pounds.

Thanks for the pics Mark 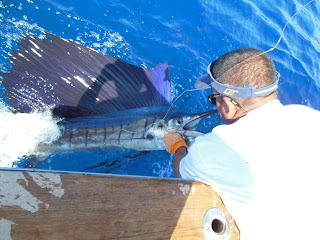 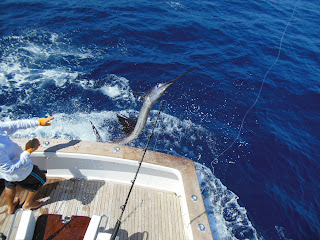 I don't put stuff like this up here often, but I know  SCOTT AUSTIN  smaustin@dishmail.net and Gene Wooster at Mobile East Marine who takes care of Scott's boat.  I'm sure that it is in excellent condition as described below: 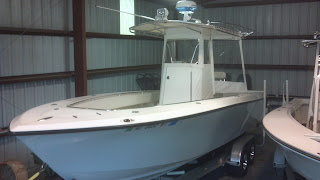 600 hrs on Twin Yamaha F 150,  average 60 miles with 30 gallons cruising. 180 gallon tank,  new tires and rims. New 31 series batteries, full curtains with wings,  Furuno navnet with radar and glassed in transducer. Furuno vhf. ,  no scratches fade or anything. Wired for electric reels. Must be seen to be appreciated.

Maybe Scott will get a bite, I got a bite today from a nice snook, but again did not connect......it was more of a refusal than a bite.

Same place, same time, more snook chasing mullets and I got a bite.....actually, I got a huge wake behind my topwater bait and a giant swirl as the snook refused my lure.   I will be back with another lure to try tomorrow.   They're making me crazy, but I'm getting closer.

After I got my bite, I saw some big splashes coming from the sea wall about 100 yards away.  I sprinted over there, thinking that my snook had dodged me and was working down the beach, running mullet against the rocks.   Just as I get into position, another big splash a long cast away to my right.  I immediately fire my topwater to the scene and I am mythed and stunned at why I didn't get at the least a reaction.....then Berto and Marcos pop up from behind some big rocks........they were throwing rocks in the water, imitating a big snook boiling on mullets.

sailfish report and my snook report

Just as things were slowing down a little bit, James and boys found a different bite and put up a heavy double digit day.....went back today to find them and it wasn't happening.

Meanwhile, I was chest deep at daylight.  Got some great pics of the crocs.....but not in my snook hole.  I threw a top water for about 45 minutes, no bites, no signs of life other than the mullets that were gathering and starting to flip.  I got my cast net loaded up, waded out there and was just about to throw the net when a nice 15-20 pounder started crashing the mullets right in front of me.  I ran back to the beach and traded for a fishing rod, another 30 minutes of casting, nothing.

Time to see the guys off on the boat, then with an hour to kill, I headed back to the beach, quickly loading my floating livewell with a half dozen perfect sized mullets.   No snooks, but the roosterfish hit the beach and gave me a quick thrill......no bites.  Maybe tomorrow.

I did not make the Mammoth Snook Memorial Service this morning.....too much going on.

Roosterfishing has fired off the past few days with the arrival of sardines along the beach.

Meanwhile, the water has gotten a little green offshore and the sailfish bite has slowed a bit.  Still getting those double digit days, but not seeing as many fish as we were a week ago.

Fortunately, the bottom fish are biting again with a good day on the groupers today. 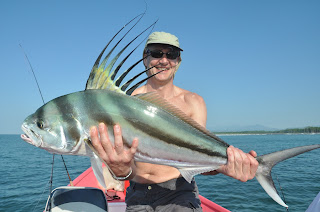 At about 4 pm yesterday afternoon, in MY snook hole, using a hand line and a foot long mullet, a local Costa Rican kid landed a snook that weighed in at just OVER 40 pounds.  I have no doubt that this was the snook that has been tormenting me.

In memorial of this amazing fish, to which I should have dedicated more time in pursuing, I will be holding a daylight memorial service.....probably sacrificing a foot long mullet on a hand line.

George,
Sorry for the delay ..... the snook was snagged accidently in the gill plate while trout fishing.   Since I sent you the picture I talked to Donald Jr. (Custom Marine Fabrication/Tackle in New Bern) who in turn had talked to the guys from NC Fisheries who shock
the water to discover what fish are in the area. They told him that they have seen 3 or 4 over the past couple of years.  The Fisheries guys also told Donald that they found a Sea Mullet above New Bern recently. Pete also mentioned that he netted a mangrove snapper last summer.
Weird!!!
Catch ‘em up down there!!!
Phil Ambler------tarpon fisherman
Phil 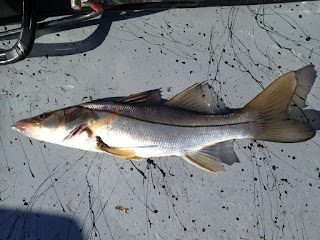 .....although the bottom fishing has slowed a bit.  Hopefully we'll get back to groupers on the plate as we get a little further away from this big moon.