The greasy slick calm days with sailfish fanning the surface in quads is just a memory after the last couple of days.   It's not rough for NC standards, but for Costa Rica, two days of 15 knt winds make it a bit choppy and the bite has definitely changed.

James on the Dragin Fly and Danny on the Spanish Fly charged out to the west today looking for all of those fish that disappeared before the tournament.  Neither of us found them.  We did have one bright spot when we were running through a squall line with torrential rain and water spouts lined up and down.   When we punched through we were greeted by thousands of birds picking the water.   James pulled back and set the spread and we caught a quick double header, missing a couple others, then it just evaporated.   Five hours later the radio fired off and the fleet tightened up, fortunately we were only about 5 miles away and made a short run to the edge of the crowd and had 10 quick bites, catching 5 of them.   7 for today and 12 for yesterday, each day we had 15 bites.   The top boat had 15 sails today with the rest of the leaders within a couple of fish.

Our friend Capt. Tony's consistency on Team Galati has got him in first place for this leg of the 3 tournament series with a total of 3300 points, followed by the HT Hook, also a 43' Maverick like the Dragin Fly, but everyone is still way behind the Xta Sea who one the first leg and now has over 10,000 points.

It only takes a couple big days to be right back in the thick of it, we're looking for one tomorrow.

In the first day of the 2nd leg of the Los Suenos Triple Crown......we started the day off with a steady pick  for the first couple of hours while the rest of the fleet struggled, then it just died.   We are in the middle of the pack with a dozen sailfish releases, way behind the leader, Uno Mas with 20 sails and a striped marlin.   Although we never landed on the motherload, we did catch most of what we saw and that is a huge improvement over our performance in the last leg.   Hopefully our hook up ratio will hold together when James puts us on the big bite.

What are you doing in a couple of weeks?

Unless you are gong to be here with me in Costa Rica, the best answer is at the Fisherman's Post Fishing School in Greenville.   Capt. Greg Voliva, Capt. Chris Kimrey and Capt. Mitchell Blake will be there representing Down East, along with some of the other top area guides.

At the end of the school there will be a drawing fro a FREE trip to Costa Rica or Argentina that  Down East Guide Service is donating.  Check it out and consider registering for the school in order to get a chance to win.

Sailfishing has been good and consistent.  Some days are better than others, but the slow days are still pretty good fishing.  Everyone is getting a turn or two.  We're gearing up for the tournament this weekend, hopefully James will get us the bites and we can do a better job of turning those bites into releases.

Some pics from this past week.

Things have been very busy for us, not much time even to ride along on the boat, let alone catch a snook.  Fishing has remained really consistent, both on the bottom for some quick drops for dinner and on top with the sails.  I did have the pleasure to ride along with some friends this week, some of them old friends who I just met. Enjoy the pics.... 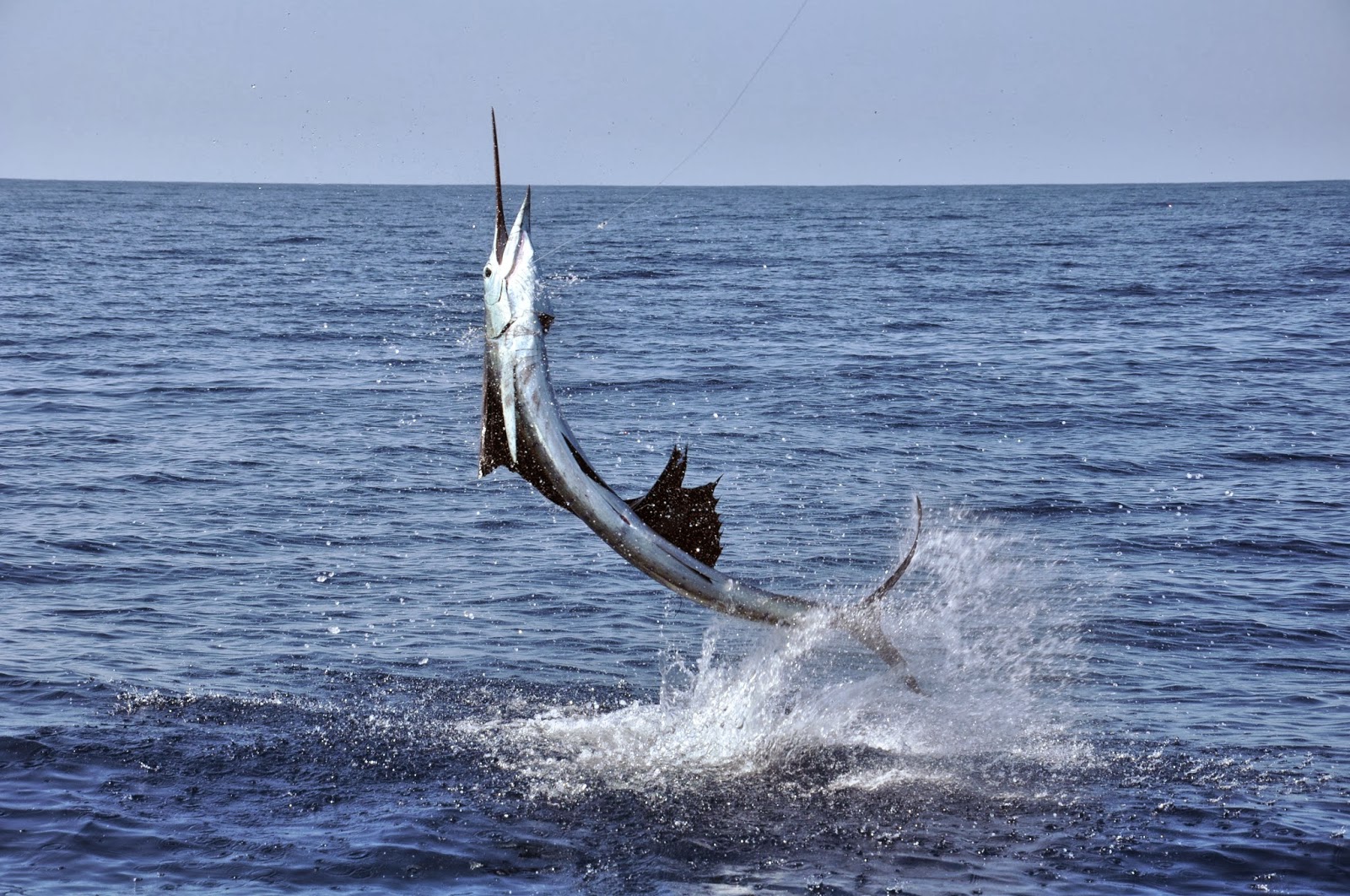 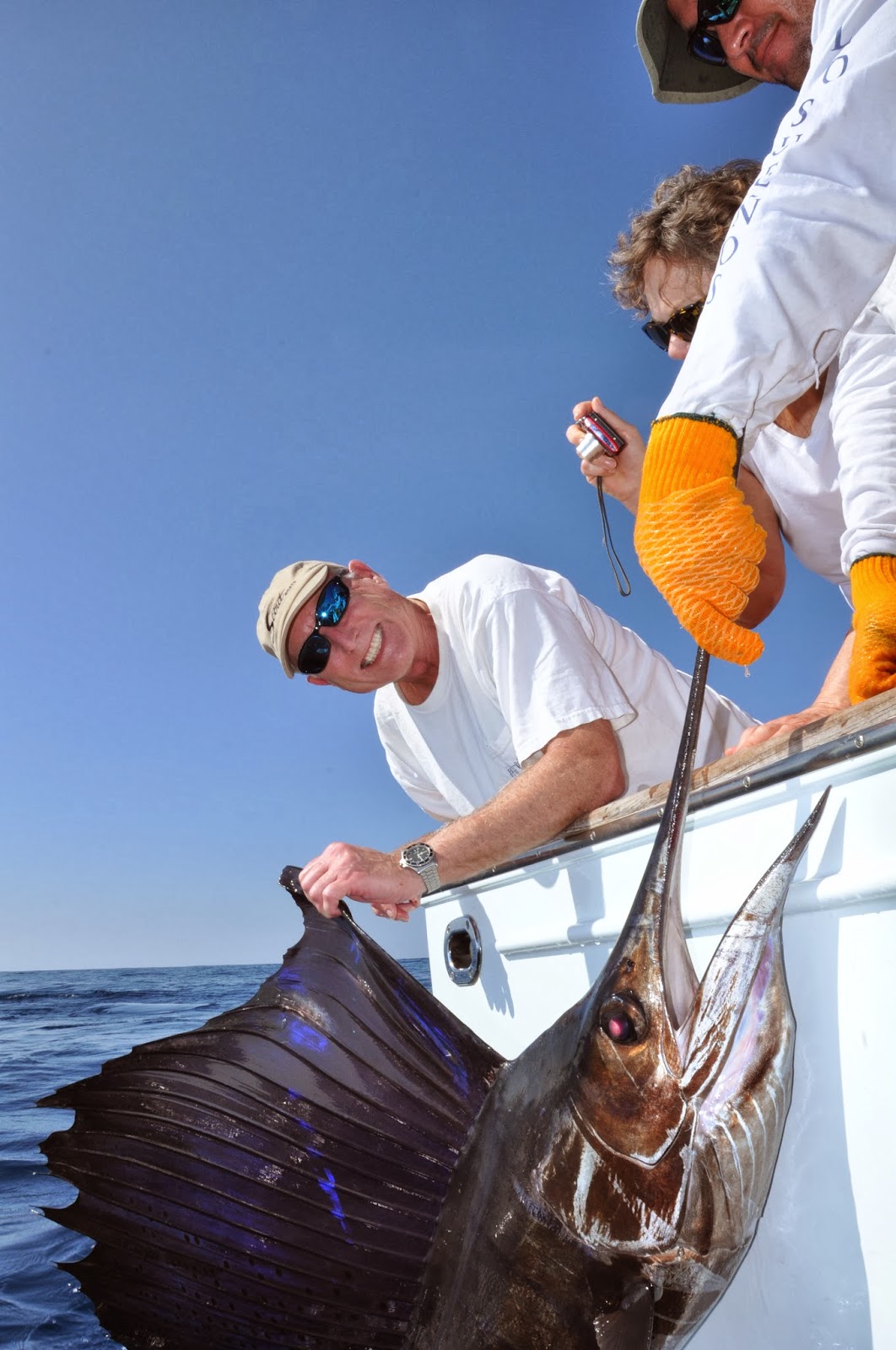 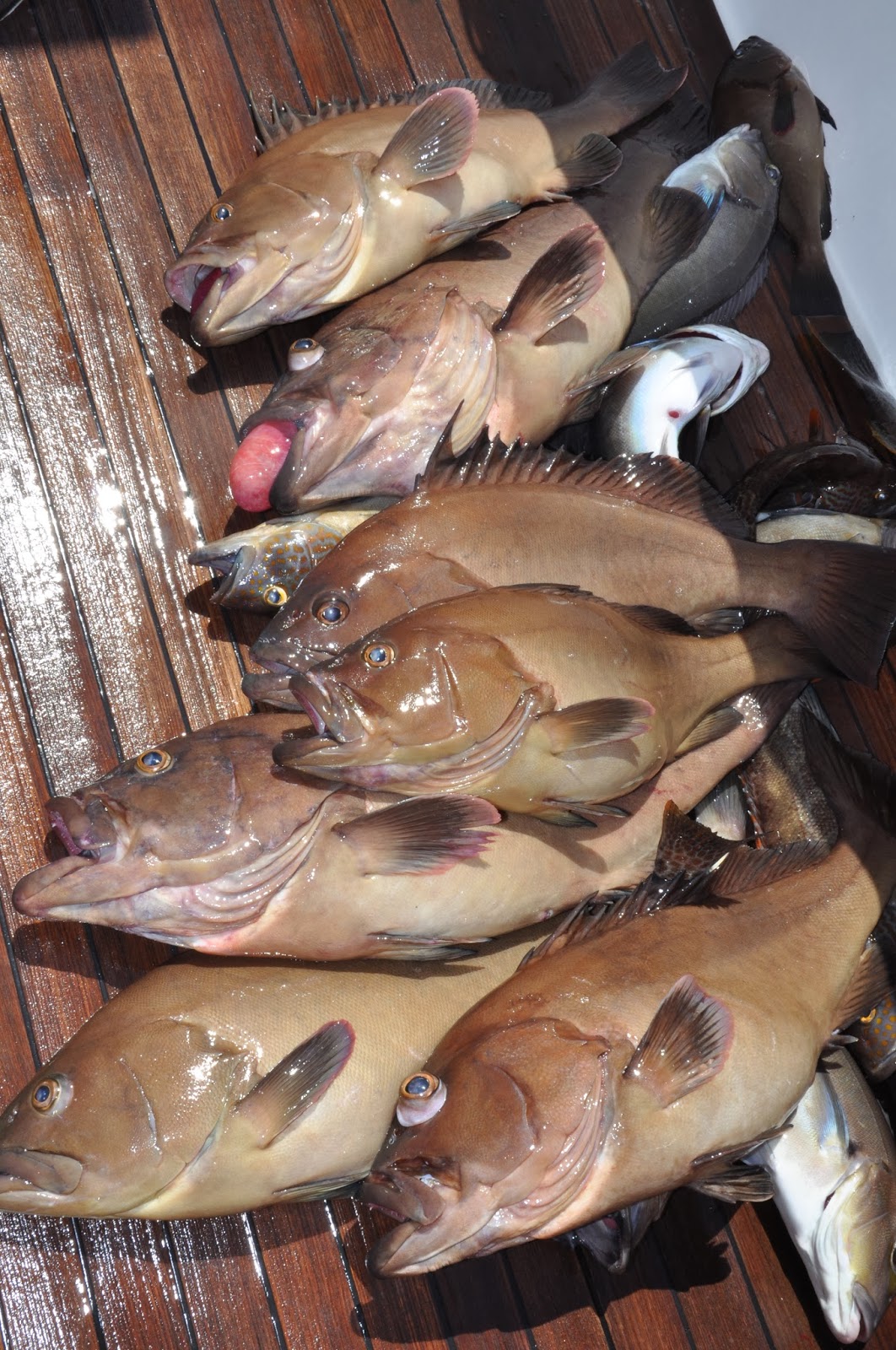 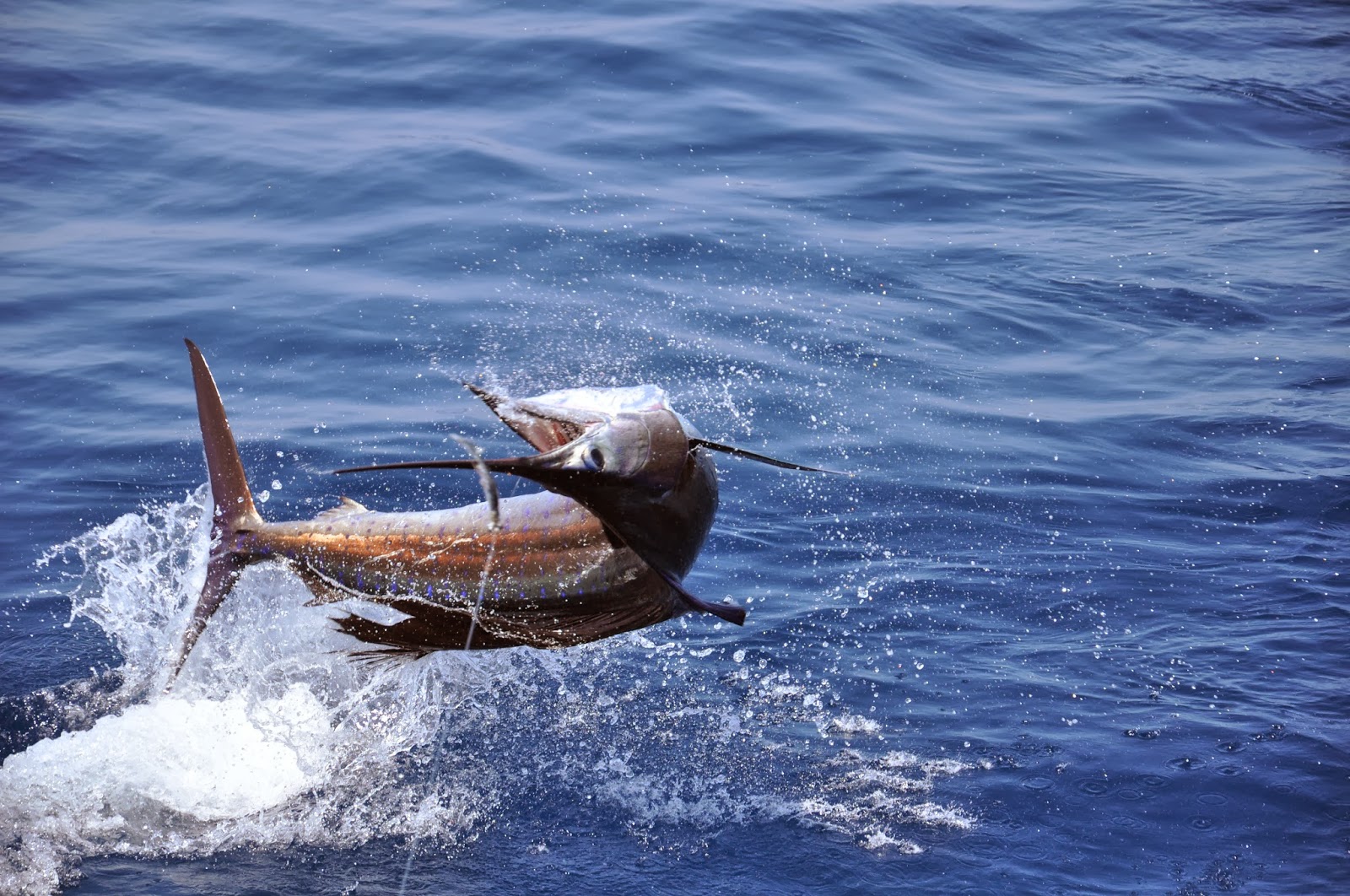 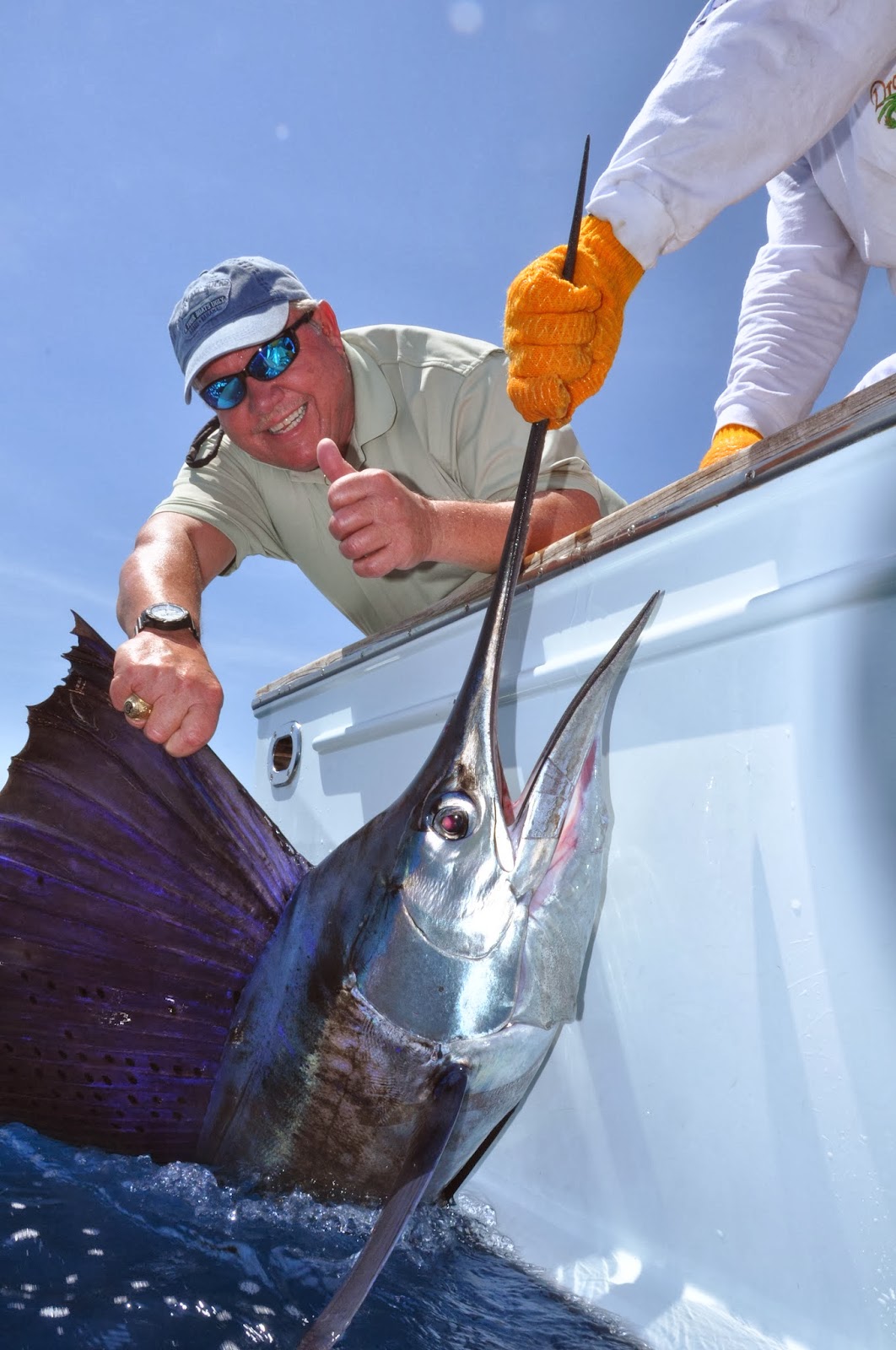 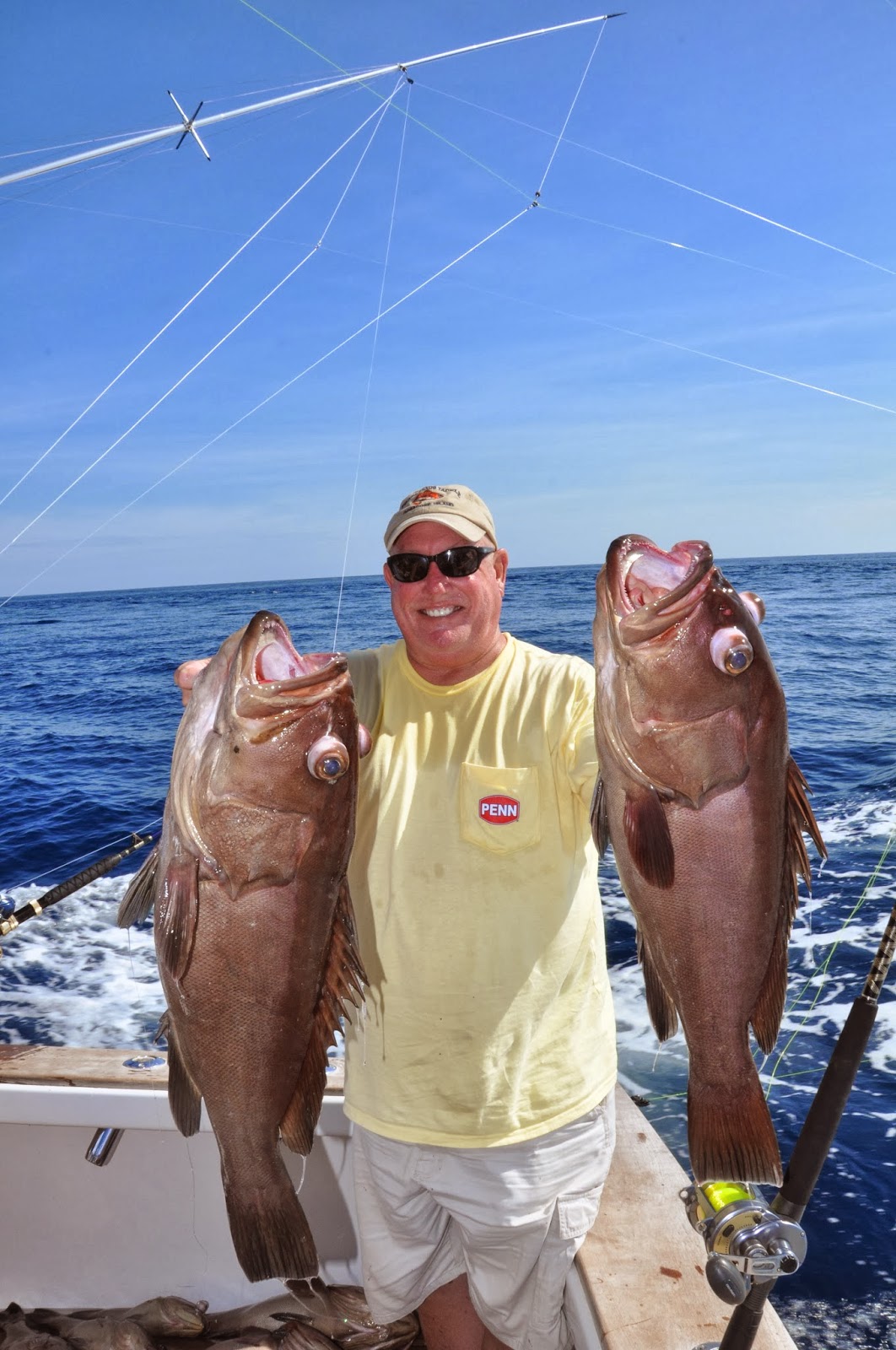 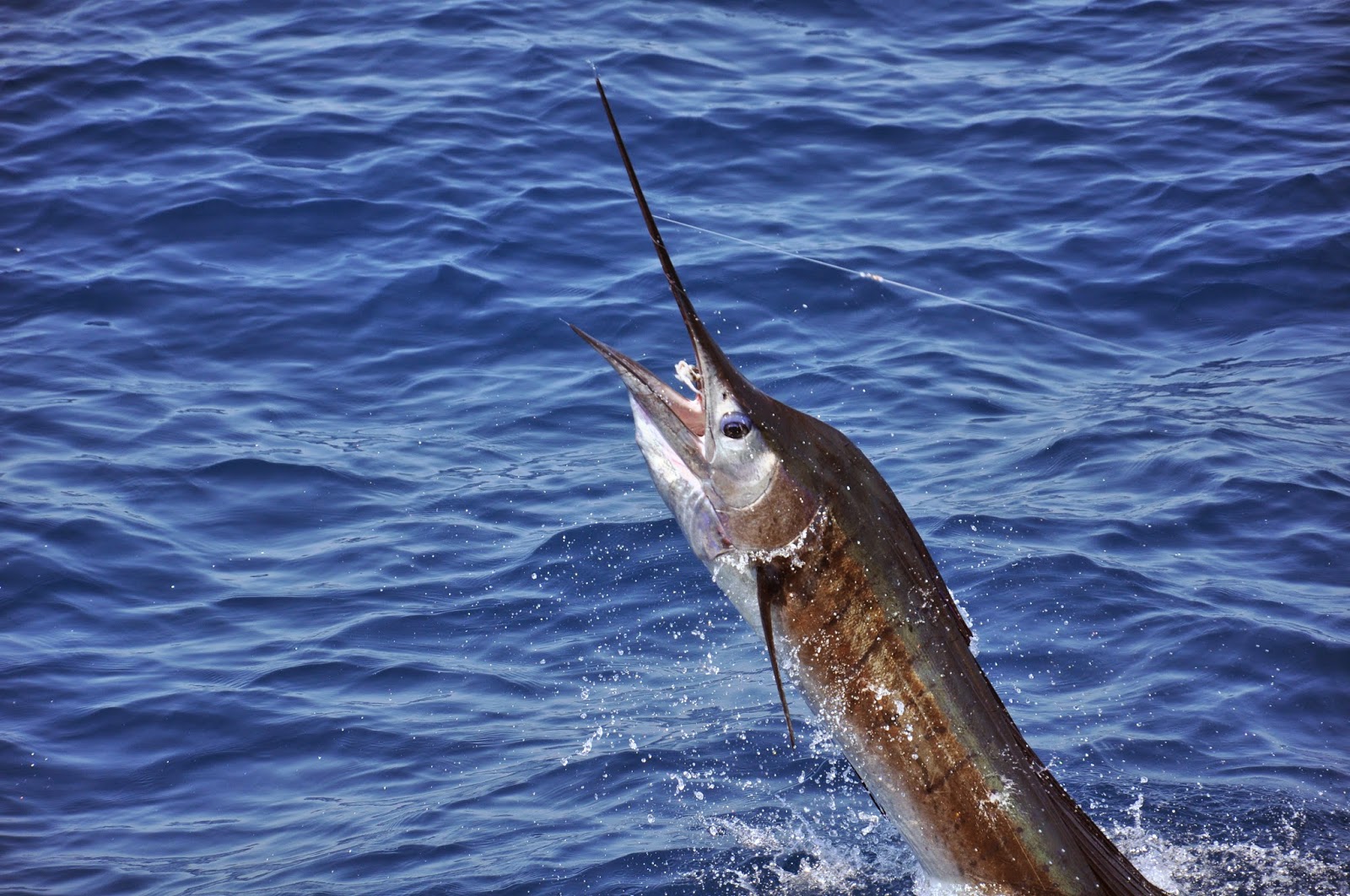 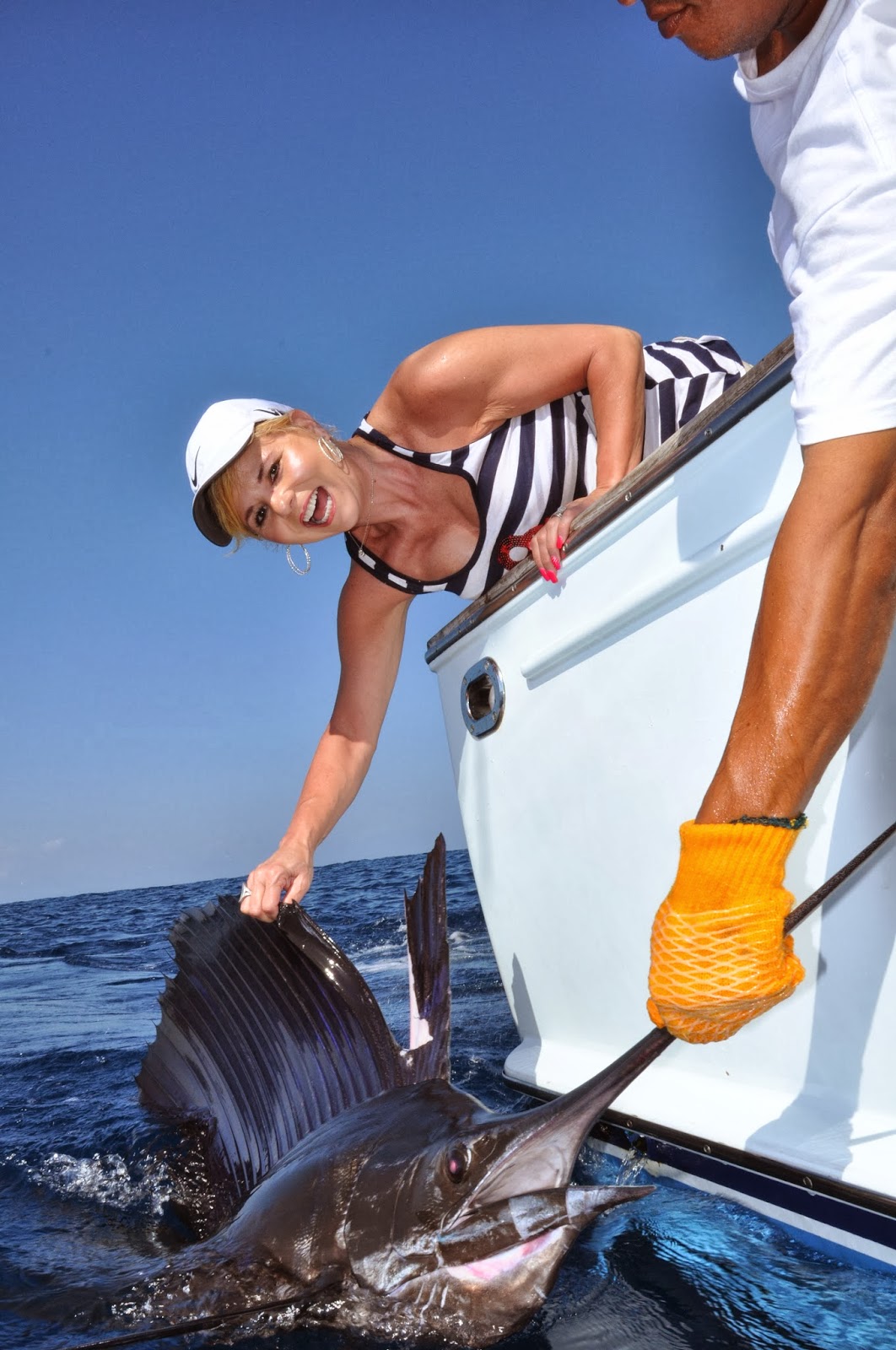 Any interest?   Shoot me an e mail and I'll send you the details.   Sign up now while space is available.

Some pics from this past week

The bite has been close, the other day we put lines out at 12 miles.  You can see the mountains in the background.  Enrique, who many of you may have fished with on his panga for roosterfish, he was out rubbing elbows with the big boys and hooked a black marlin right beside us, jumping him off but catching some sails and dorado. 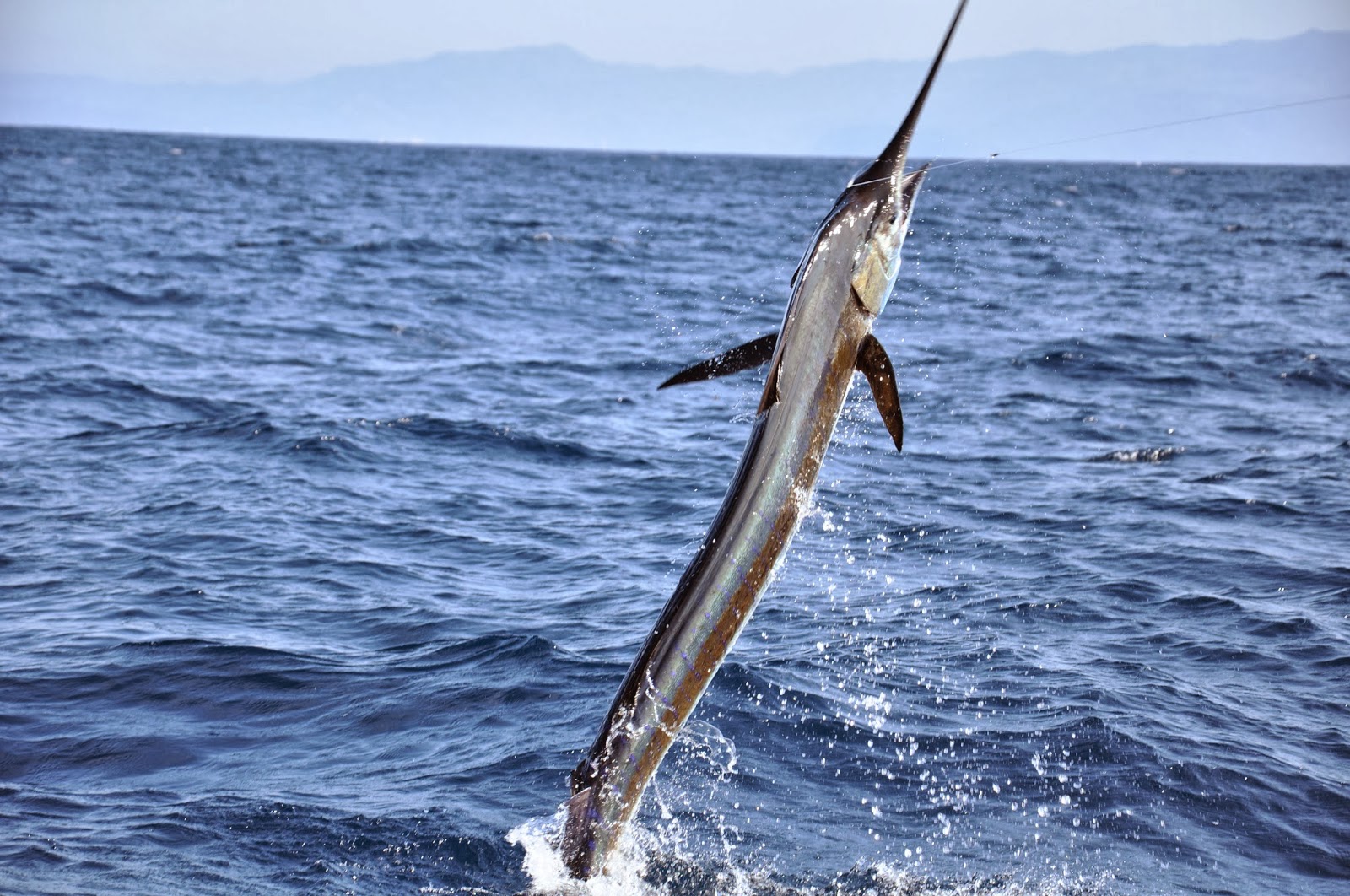 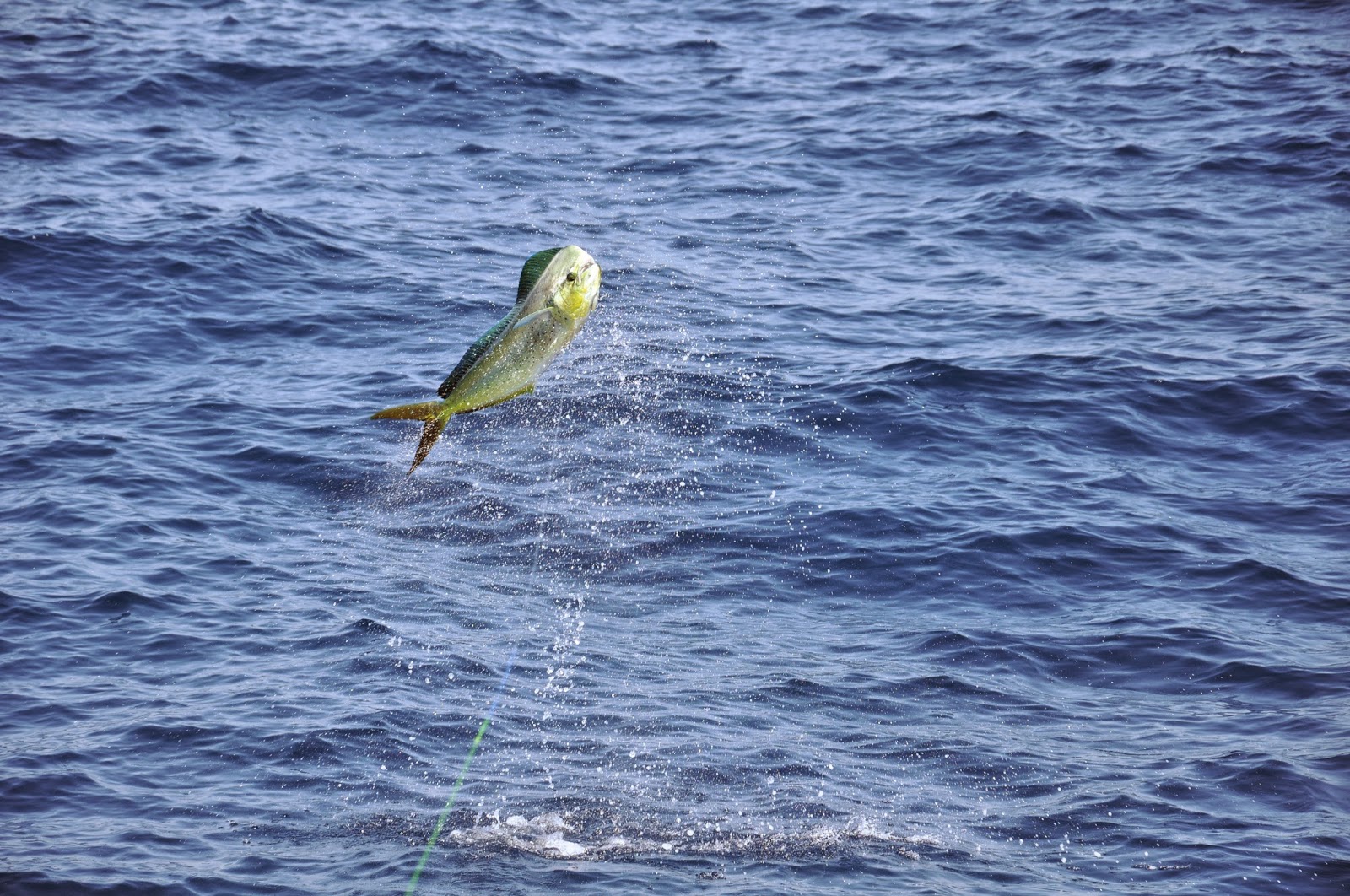 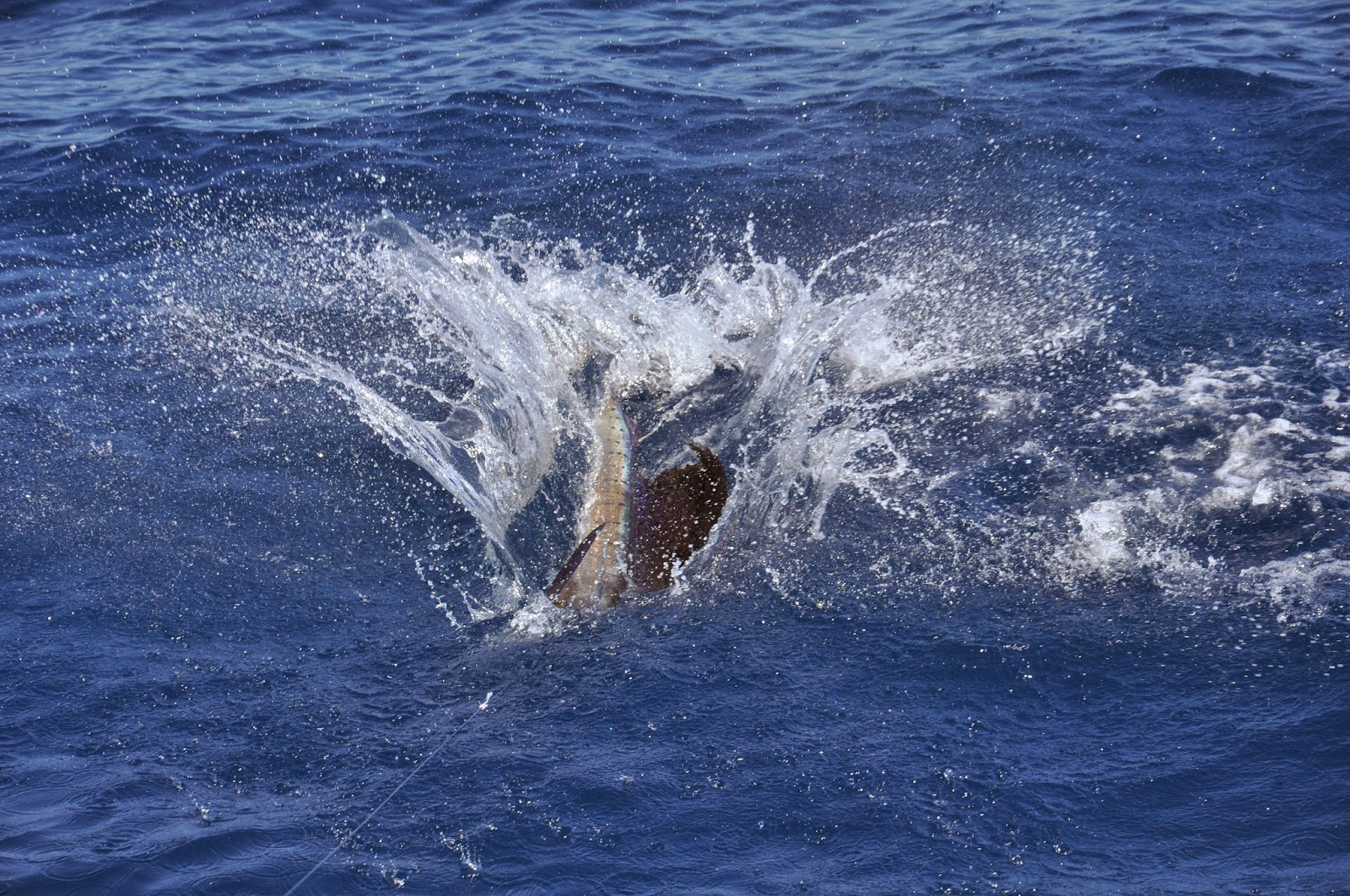 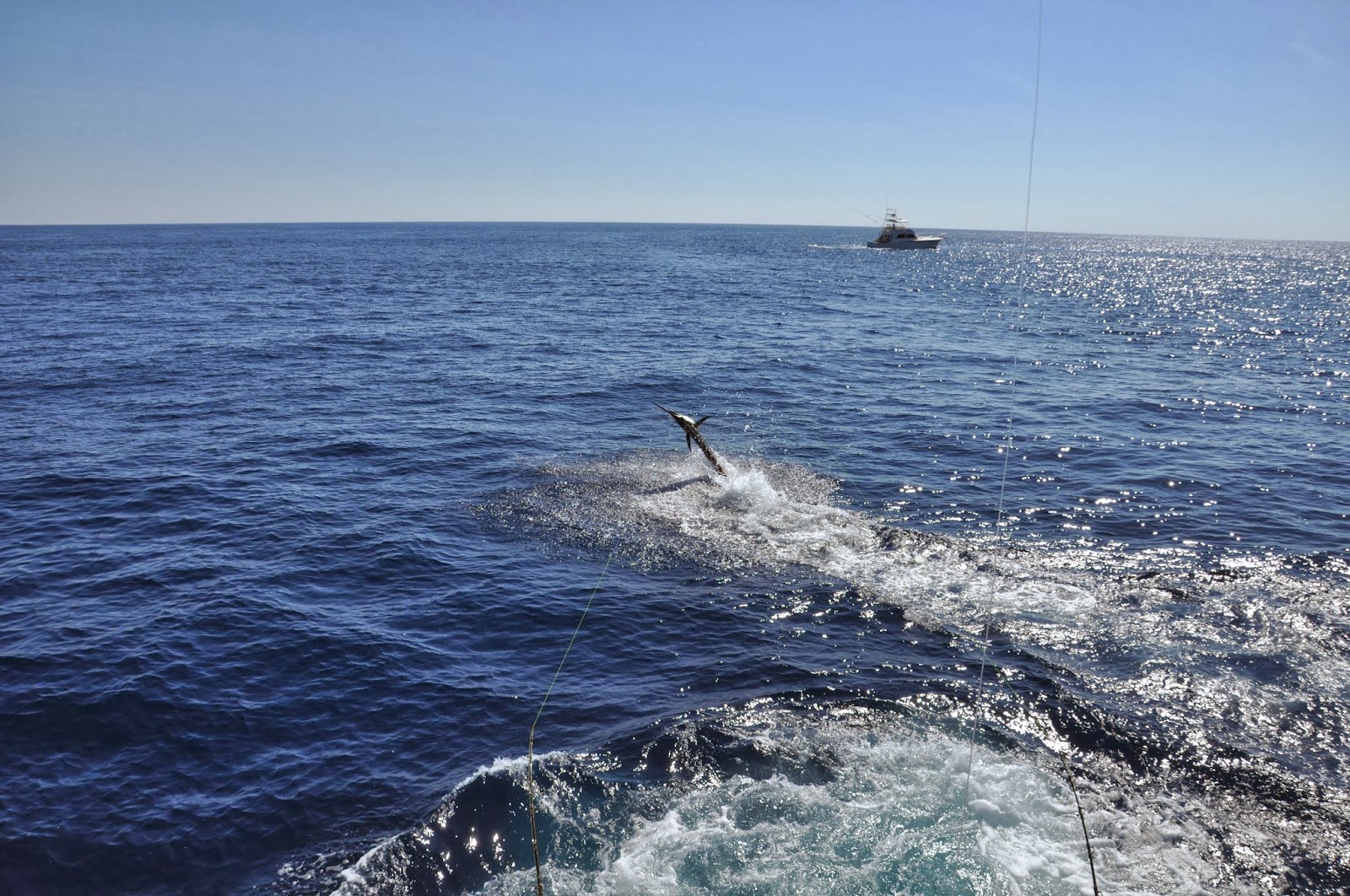 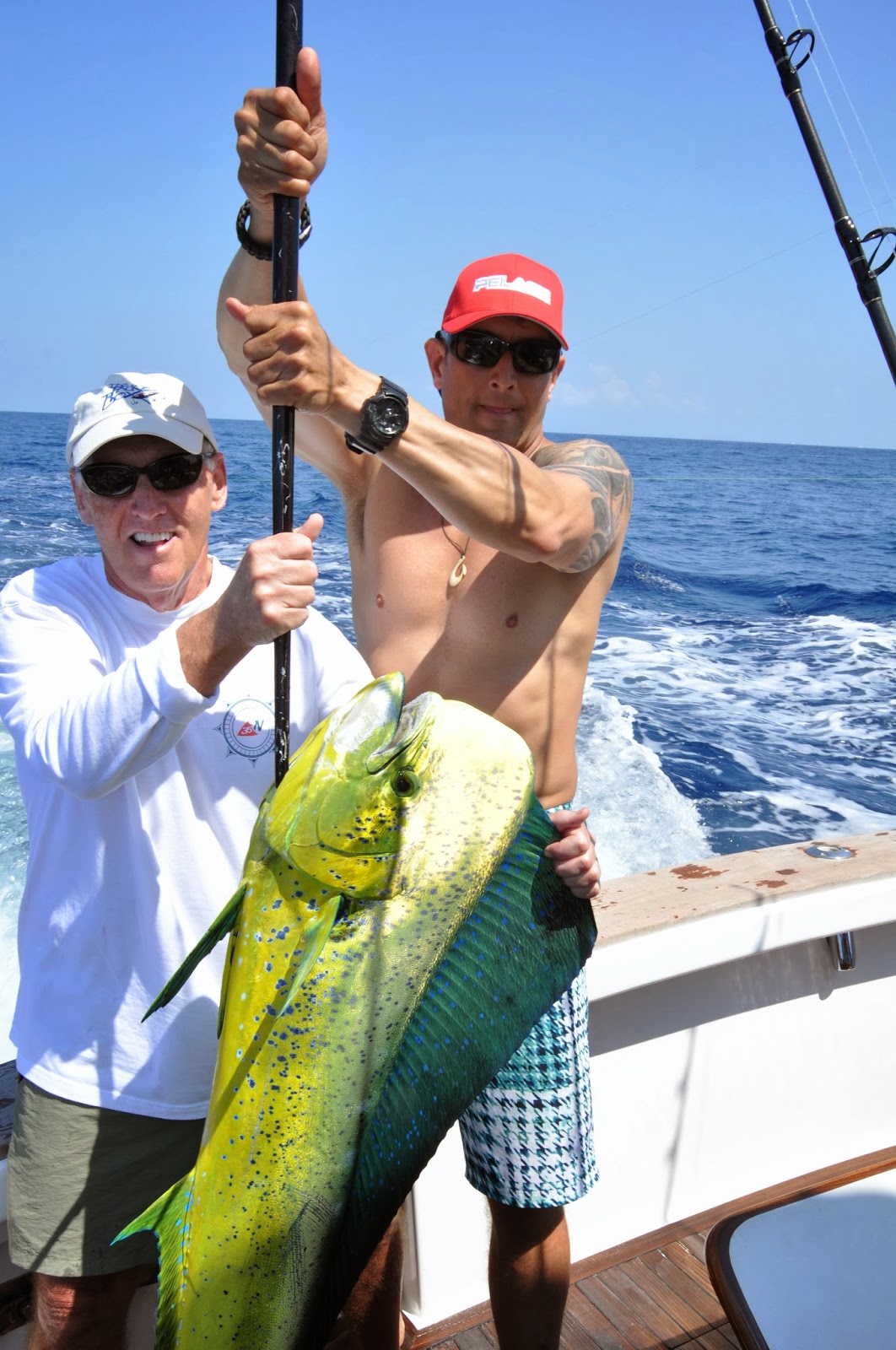 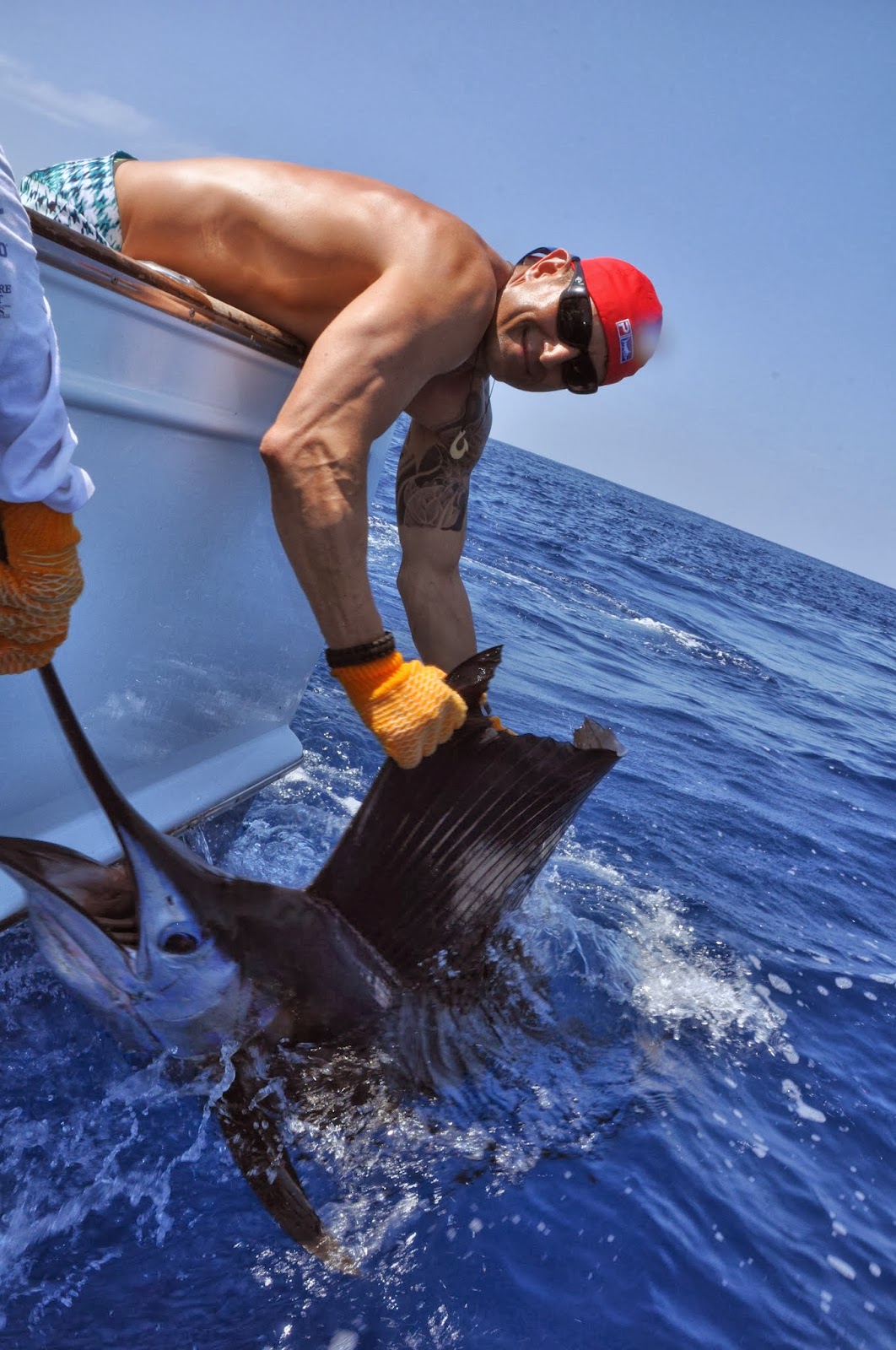 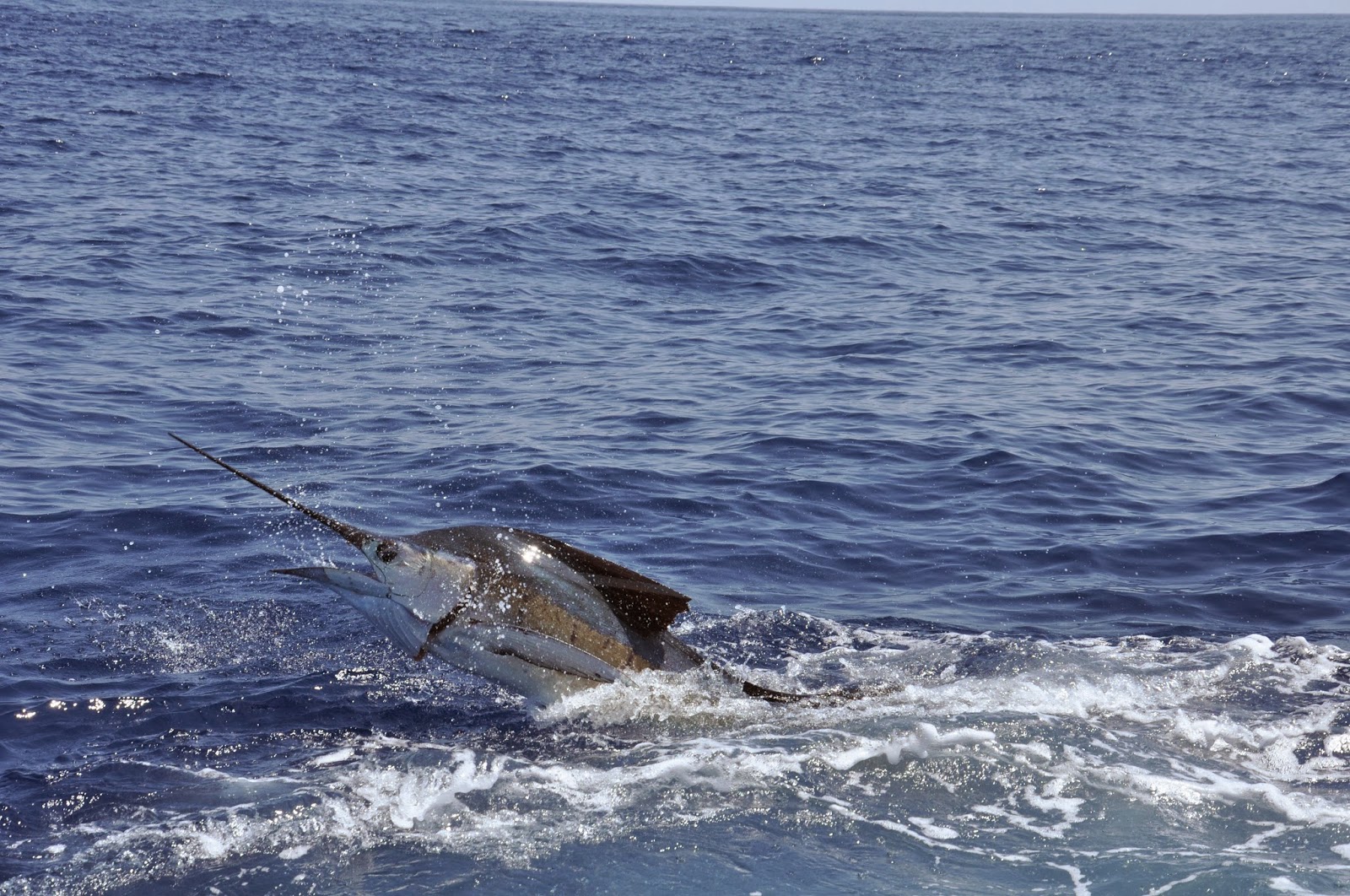 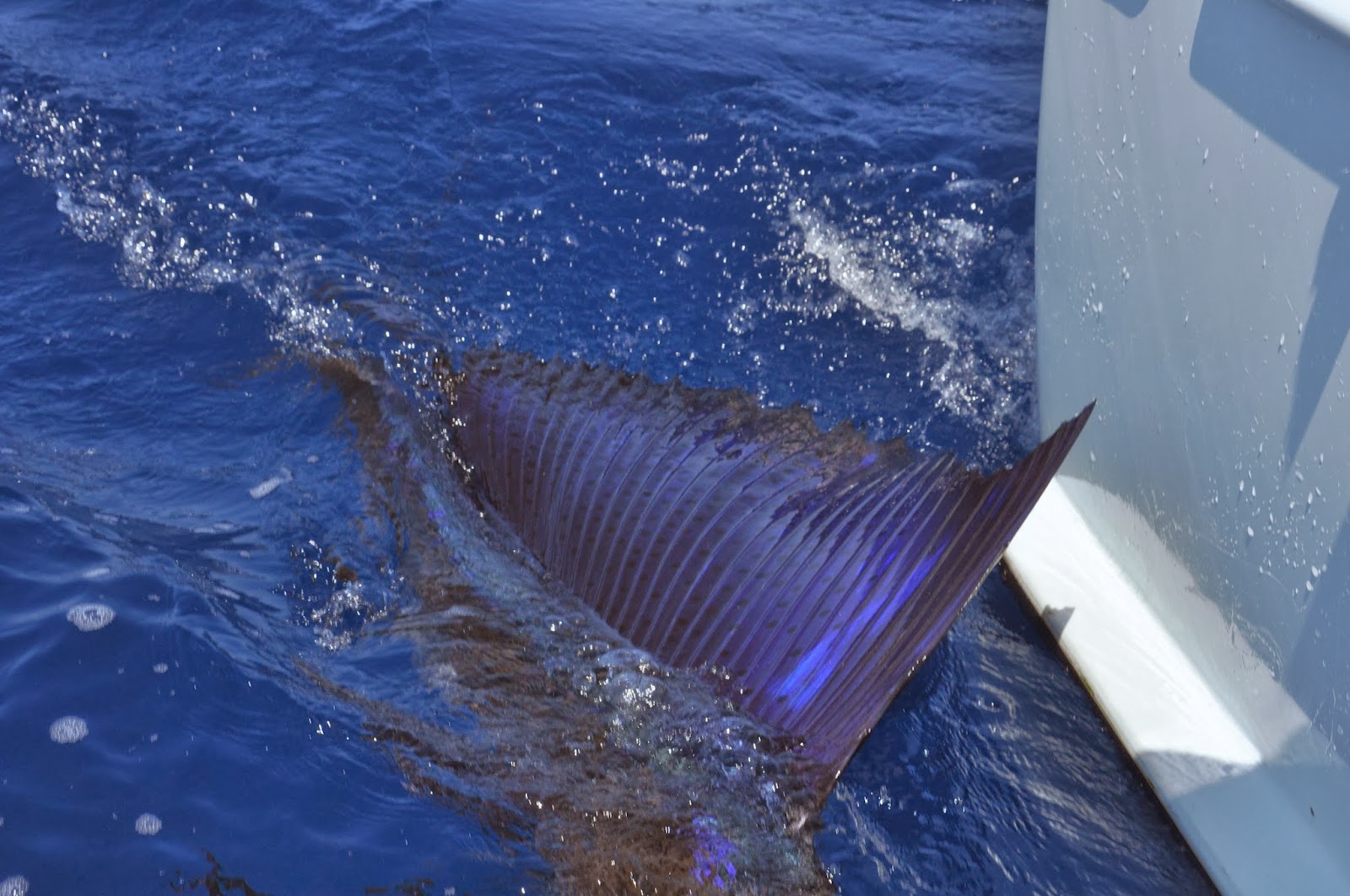 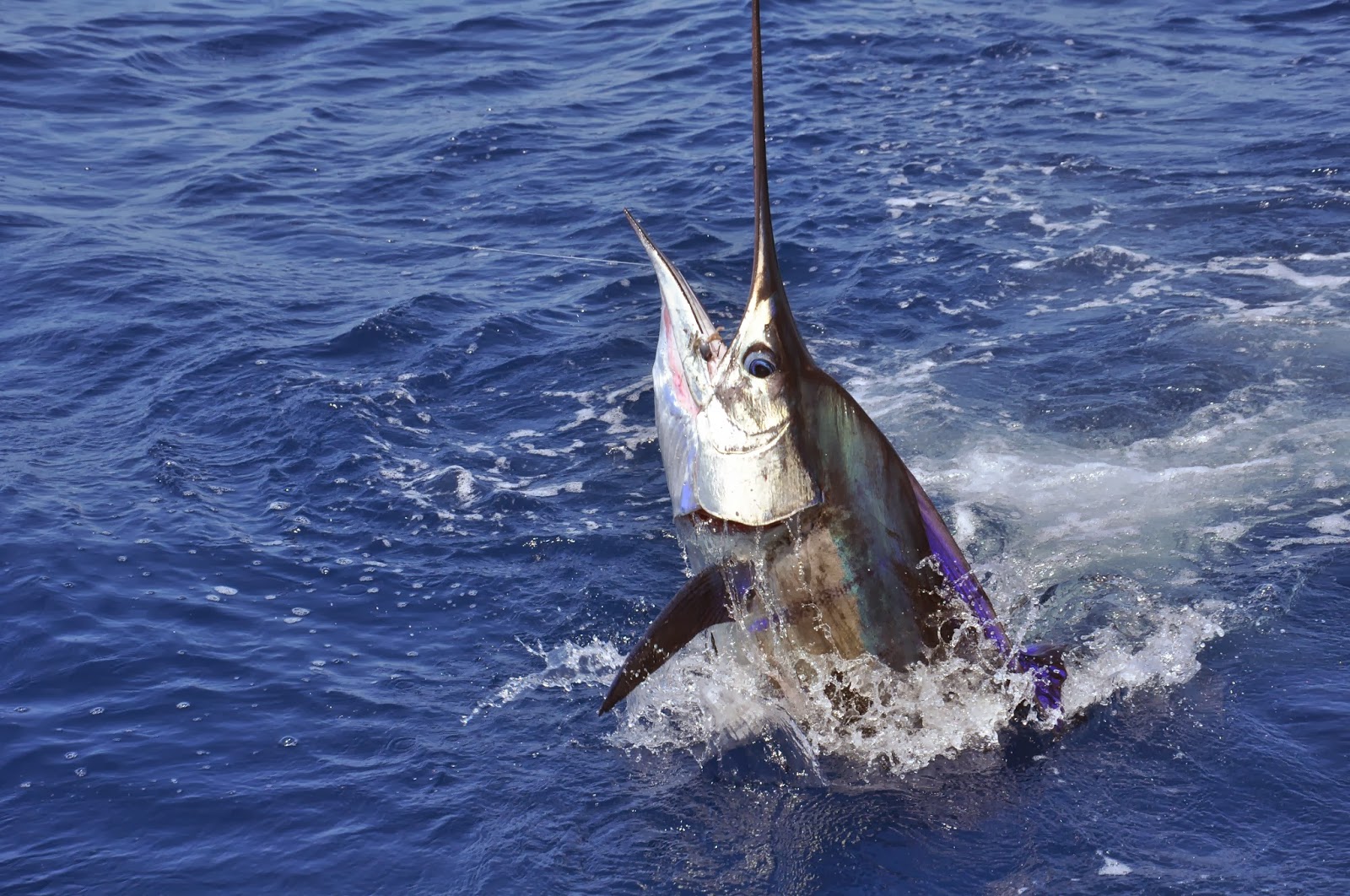 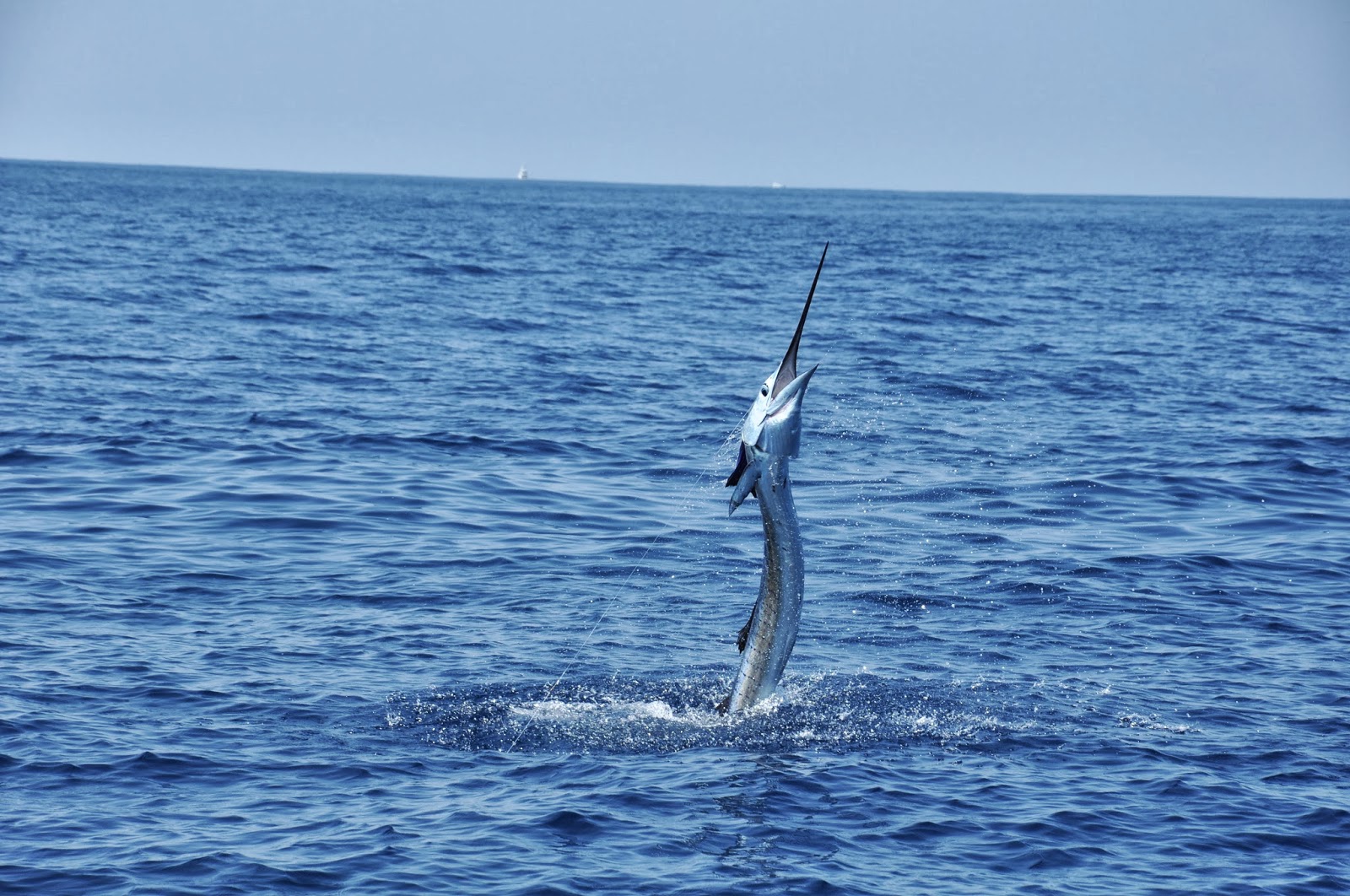 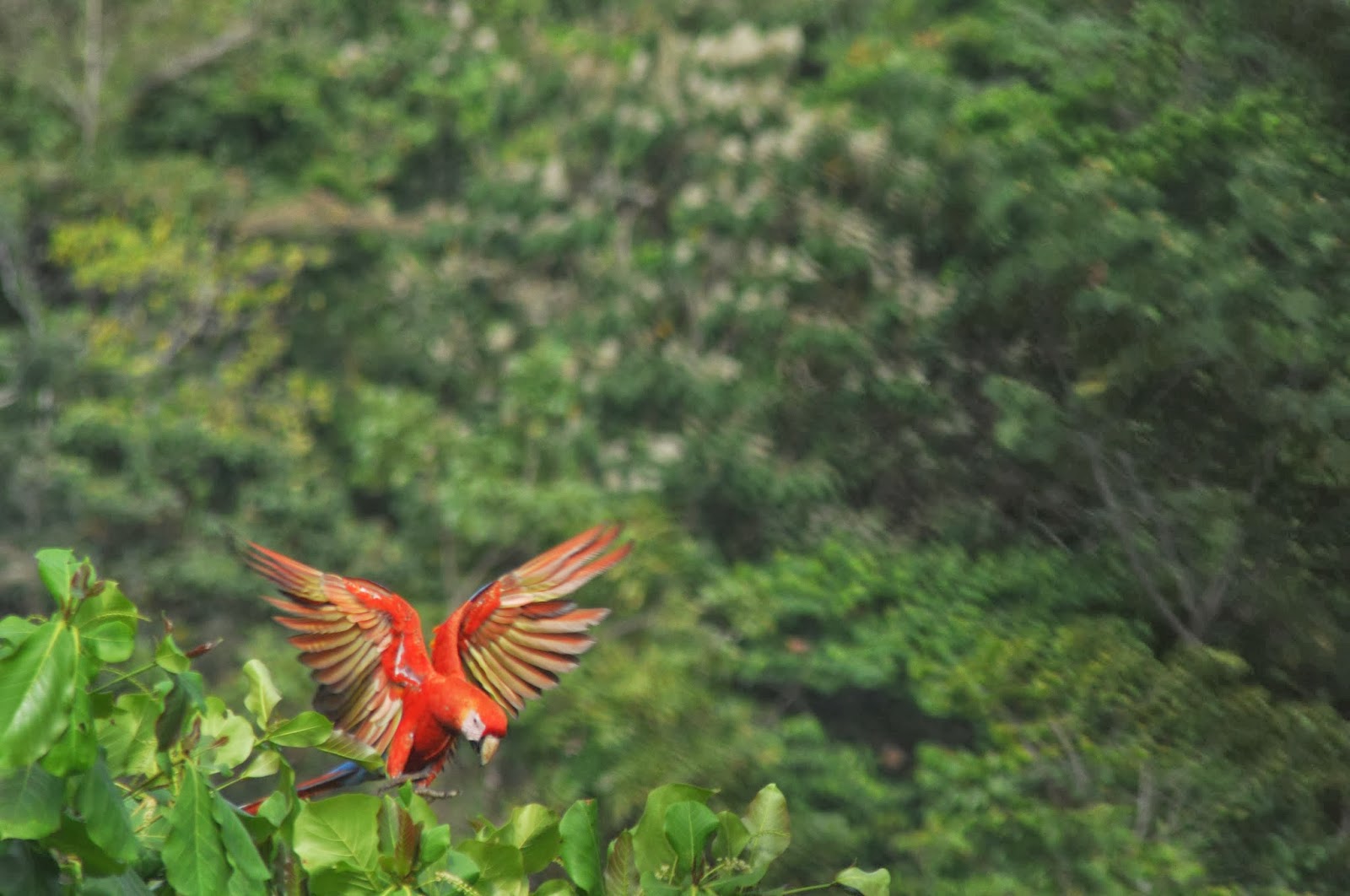 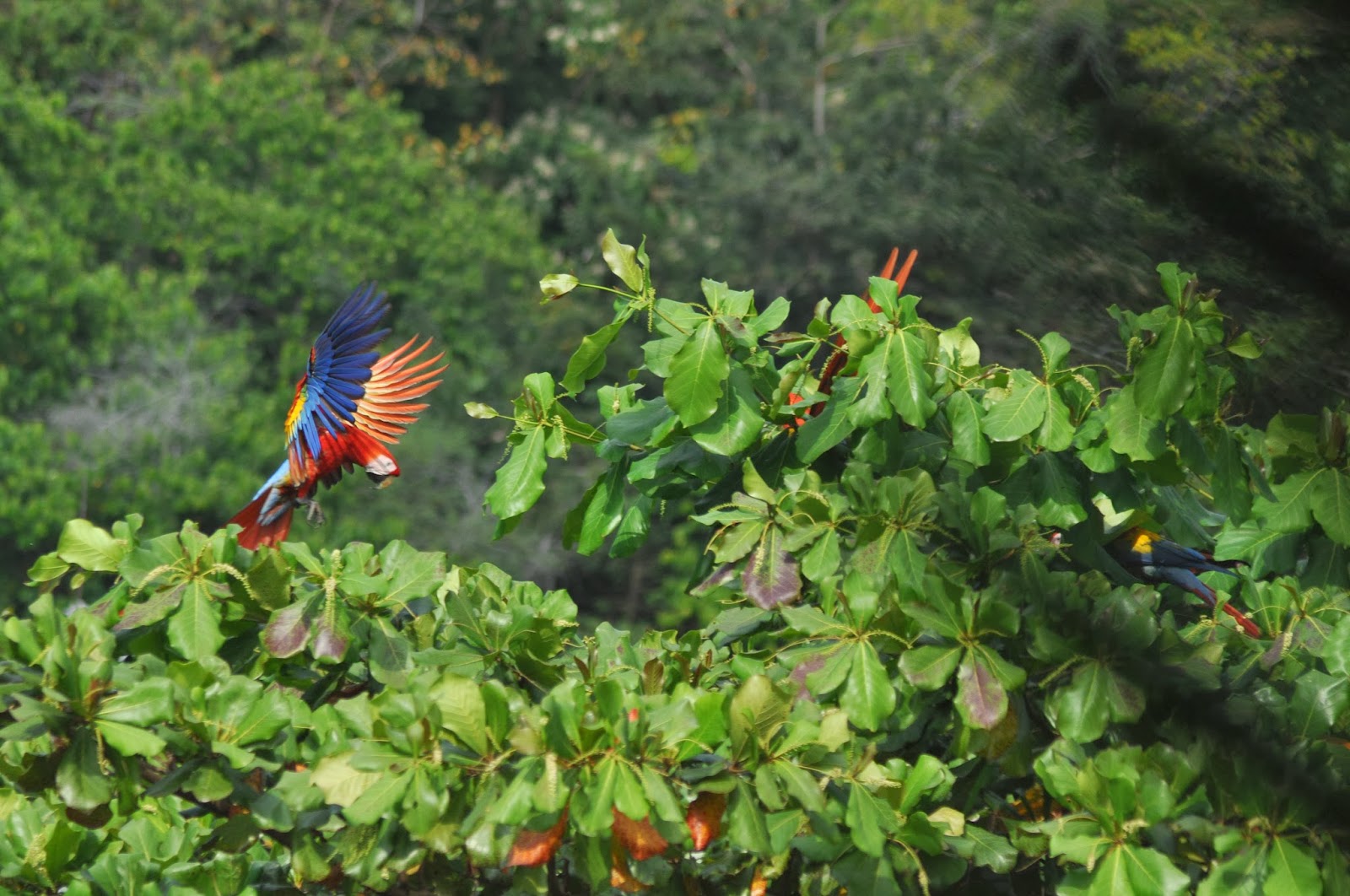 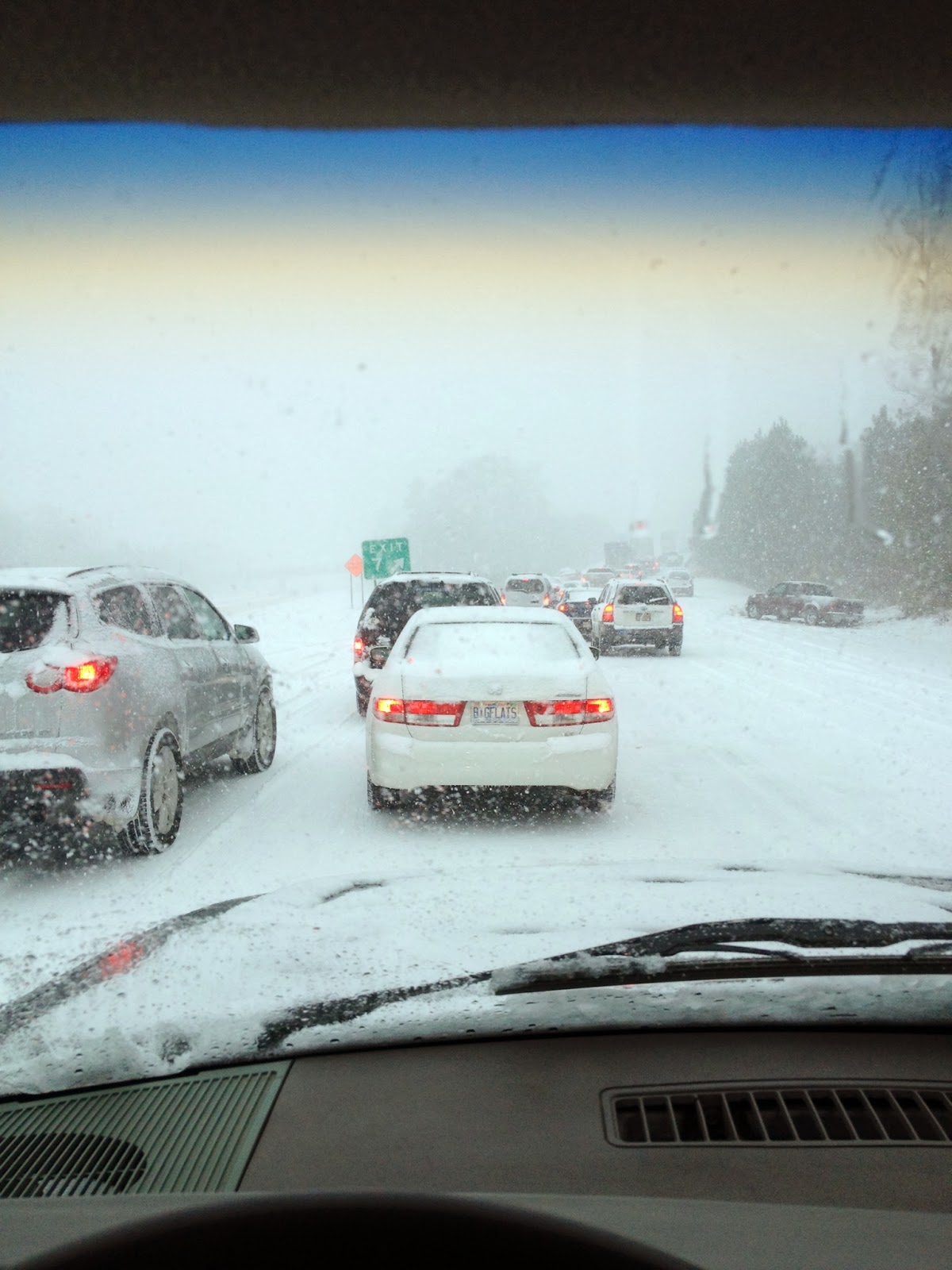 It is not too late to escape this winter and come see us in Costa Rica.

A note from Anna, George and Riley

Anna, Riley and myself just wanted to drop you a note from Costa Rica.
How is the weather up there?

How's the weather up there?

Sailfish bite slowed a little today, still double digit shots and everyone gets a turn  or two plus dorado for all.

Capt. Mitch Blake is still plugging away at 25-50 fish half days.....I guess that's pretty good unless you are in Costa Rica.   Steady double digit days on the sails for us plus enough gaffers that we start releasing them.   Don't take more than you need.......

This is a "nice 'un".   The inshore fishing has slowed a bit, sardines are a little more scarce, but there are a few mullet around which is what this one ate.   As our guide said, "I like using mullet that are at least a foot long.   The needlefish and jacks don't mess with them and when you get a bite it's either a BIG rooster or cubera."    Bobby and I were at our last spot and commenting on how nice the day was, the scenery, the weather and how content that we were with the time on the water......then we got our only bite of the day, but it was the one that counted.   In Quepos, more sardines and a more consistent bite, but no monsters like this. 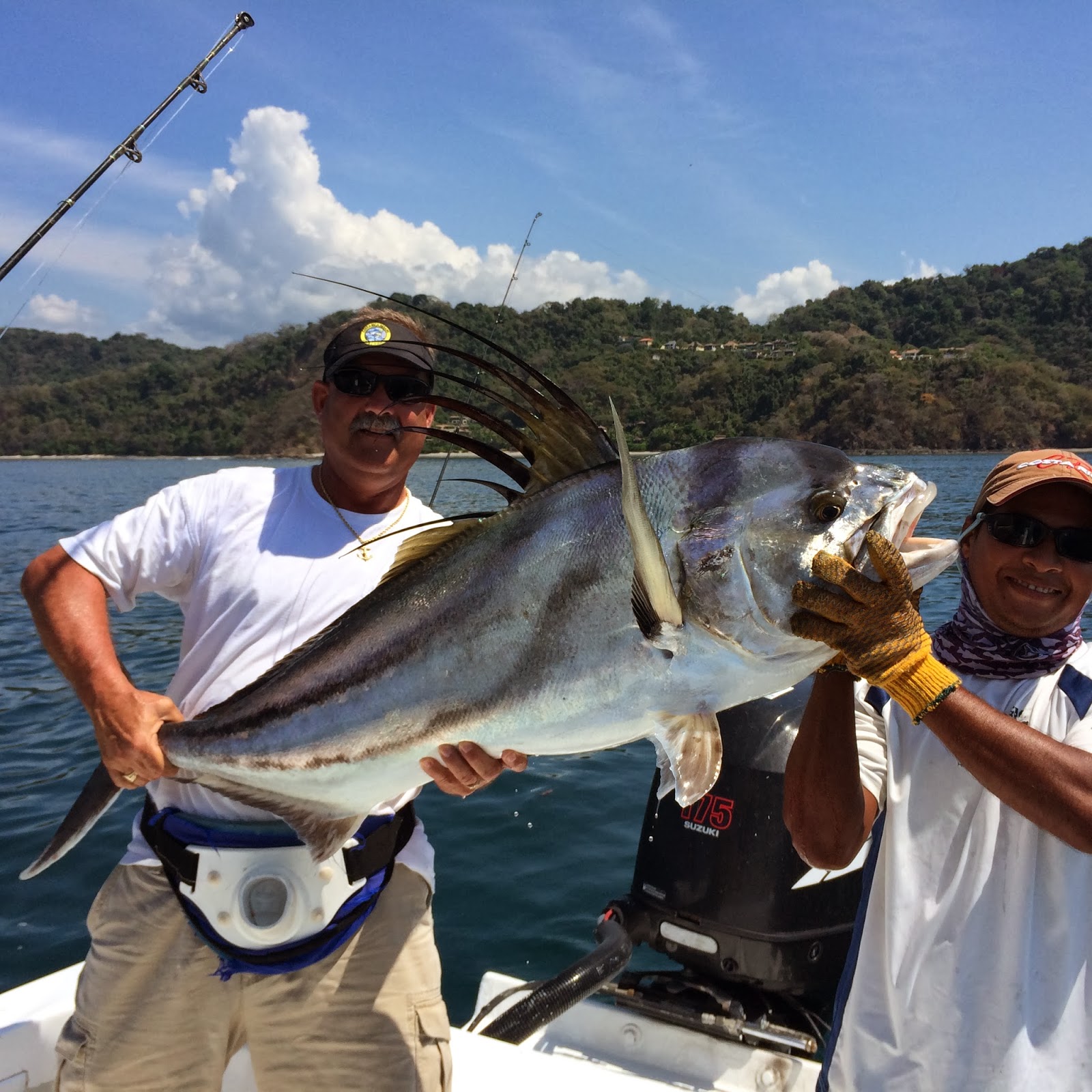 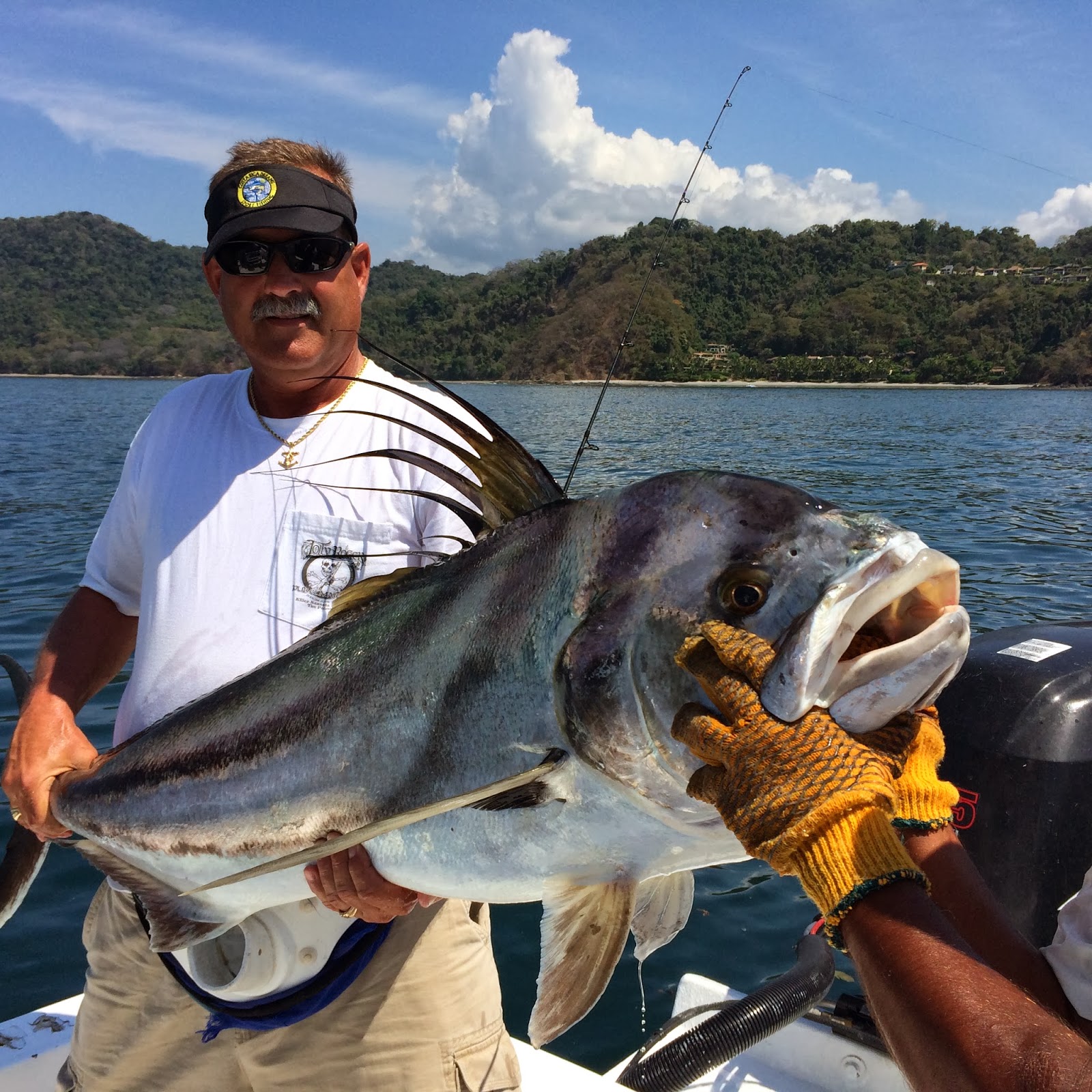 Waters close to recreational and commercial harvest of spotted seatrout

MOREHEAD CITY – North Carolina will close all coastal and inland waters to commercial and recreational spotted seatrout harvest at noon Wednesday and remain closed until June 15.

Cold stun is a naturally occurring event. When waters cool during the winter, spotted seatrout move to deeper, warmer waters in the estuaries and ocean. But if there is a large drop in water temperature over a short period of time, the fish may be stunned or die from it.

Studies have found that cold stun events can have a significant impact on spotted seatrout populations.

Under the N.C. Spotted Seatrout Fishery Management Plan, if a significant cold stun event occurs the Division of Marine Fisheries will close all spotted seatrout harvest. The intent of the closure is to allow the fish that survive the cold stun event the maximum change to spawn in this spring. Peak spawning occurs in May.

Seafood dealers will have until Feb. 12 to dispose of unfrozen spotted seatrout taken prior to the closure.

For more specifics on the closure in coastal waters, see Proclamation FF-9-2014 at http://portal.ncdenr.org/web/mf/proclamations.

For more information, contact Chip Collier with the Division of Marine Fisheries at 910-796-7291 or Chip.Collier@ncdenr.gov. 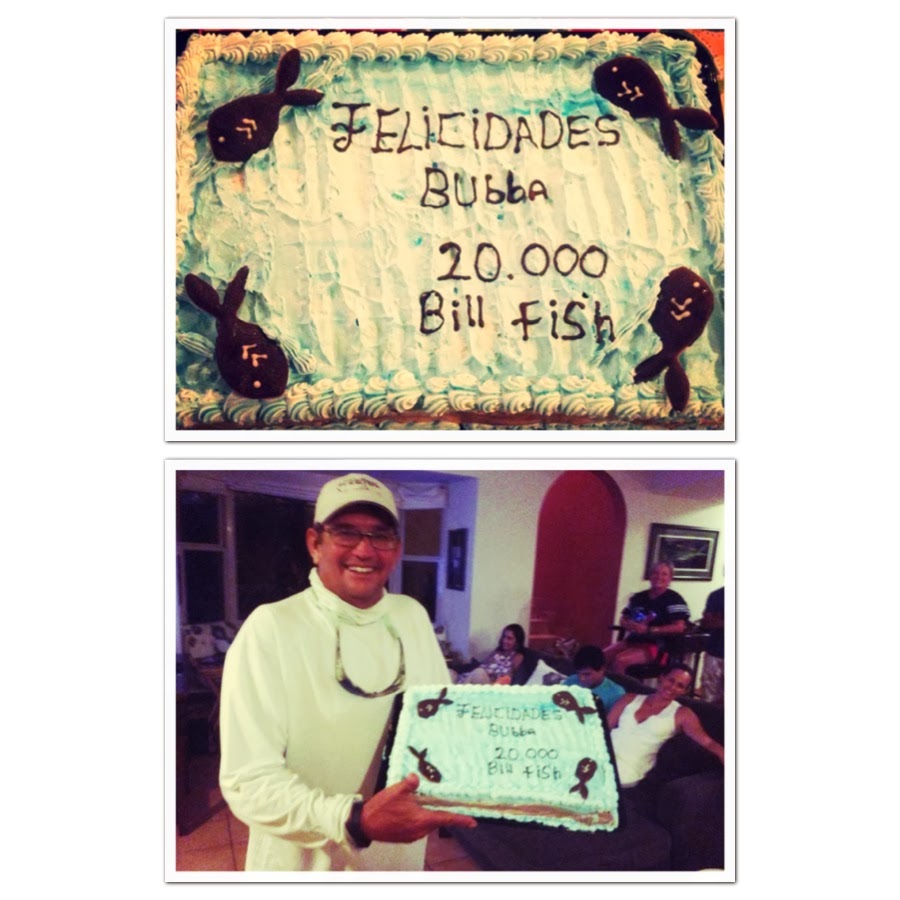 Super Bowl was a bust so we celebrated Capt. Bubba Carter's 20,000th billfish instead.

posted by Capt. George Beckwith at 9:56 AM

All the black marlin you ever want on a 30

That's how James described the black marlin that refused a bonito on a 50 and ate a dink bait on a 30.  After getting hooked, she just swam along on the surface, James backed right down to her and got the release.   When Berto tugged a little on the leader, a 500-600 pounds of fury was unleashed, bolted off 200 yards in the air then turned and charged the boat.  The Dragin Fly doesn't blow smoke but James did give her the gas   trying to get out of the way of that big marlin.  Also a double digit day with the sails.

Congrats to Capt. Bubba Carter on the Tijereta, he got one of those 250+ pound tunas yesterday.

The boys tried some of that bottom fishing after giving each angler on the boat a double digit day with the sailfish.   Bobby and Tom are pretty tough, they cranked up 10 groupers a piece out of 300 feet of water.   Yesterday the sailfish bite slowed, but the Dragin fly still got everyone a turn on the boat and absolutely Mohawked the groupers.   Crew, families and customers are eating good.

Talk about eating good, Bobby, Teresa, Tom and Ruthie have had fish that they caught for dinner every night this week, dolphin, tuna, grouper and last night snook.   Bobby let his roosterfish go and said he would take grouper two nights in a row.