report from this week, pics from last week

While we were doing this last week in Costa Rica there was some fantastic fishing in NC. Capt. Brian Horsley and Capt. Sarah Gardner had an "epic" day of drum fishing on the East Side of the shoals, all sight casting 30-50 pounders, all on the fly.

Meanwhile Capt. Joe Ward has been spanking the trout up in the creeks with multiple catches of fish oer 4 pounds.

This week, Capt. Lee completed a Mirror Lure School and guided his folks to over 40 trout, all caught on Mirror Lures......I think I need to attend his next class.

For me, a few albies in the ocean when you can get out and a few small trout back in the marshes. I'm headed to the mountains this weekend, so I'm sure that the bite will be good. 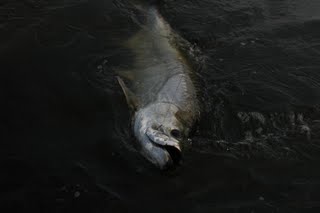 Capt. James and Berto with a double header 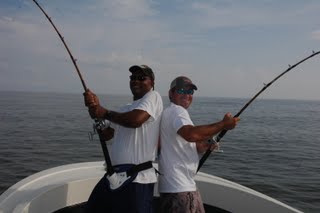 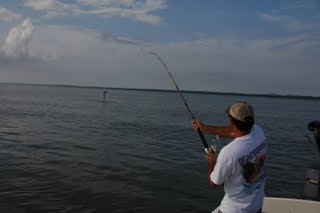 Dad getting it done with a fly rod 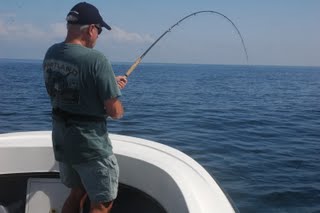 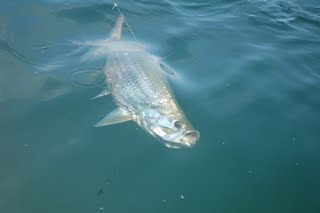 Henry caught 21 tarpon in 4 days, plus a sail on the back end of the trip: 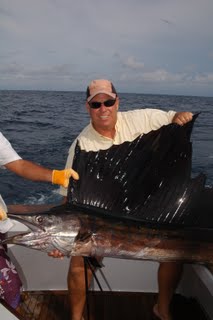 Plenty of little blues and a good show of albies. Capt. Ray smoked the flounder last week, gigging his 4 person limit of 32 nice keepers. Capt. Joe had a great couple days with the trout.

Capt. Joe Ward with trout from a trip out of Oriental this week. 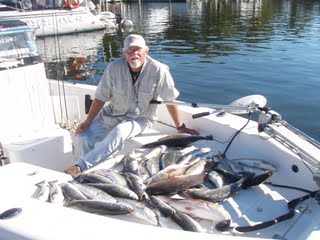 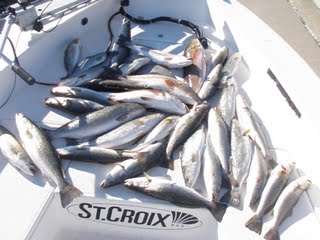 Report from the tropics

Although this is the heart of the rainy season, the weather has been decent and the fishing has been good. It has poured raine for a couple of hours each day, but most of the day has been rain free with plenty of scattered sunshine. The few showers haven't slowed the fishing.

Day 1 we arrived in Costa Rica and headed to Jaco for dinner at Tsunami Sushi, followed by a day of offshore fishing.

Day 2 Headed offshore in search of the trash lines which are more prevelant during the rainy season, with plenty of debris coming out of the rivers. They are typically loaded with gaffer dolphin and it didn't take long to get into consistent bites of 10-15 pound dolphin every few minutes.
With dinner in the cooler, we slipped out a little further in search of a billfish bite that never materialized. We did run into a huge school of spinner dolphins that were accompanied by their typical companions, yellowfin tuna. For two hours we caught 10-40 pound yellowfins on flys and casting poppers. Back to the Cocal for dolphin and tuna dinner and San Jose for the evening.

Day 3 An early rise from the San Jose hotel and short trip to the airport where we have a private plane waiting to take us to the other side, a 25 minute flight. Check in to the lodge and we're out on the water. It didn't take long to get the first bite. In three hours of fishing, Dad and I caught 4 out of 7 tarpon. After lunch, back out on the river, but we were only good for two drifts, hooking and landing two double headers, two of them on the fly.

Day 4 and 5 were filled with great tarpon fishing, each boat putting 10-20 tarpon in the air/day. Every angler's expectations were exceeded. Congrats to first time tarpon fisherman Lee Smith, who landed 19 tarpon in three days, including 3 on the fly. Henry Frazier got some payback on the silver king after a frustrating summer, he landed 20 tarpon in 4 days.

Day 5 Most of the crowd headed back to San Jose, but Henry, Jimmy Wiggins and I headed to the Pacific for some more time on the Dragin Fly. Henry completed his trip with a sailfish release and several dolphin releases. Jimmy got what he wanted, stopping on some rocks in 300 feet of water for some deep-jigging. Tilefish and grouper for everyone, catching about 20 of the great eating fish, plus an assortment unidentified denisins of the deep.

Day 6 The guys head home and I've got some business to do. Getting reservations together for this season. Anytime is a great time to be in Costa Rica, drop us a line to make your trip happen.

posted by Capt. George Beckwith at 9:52 AM

A little "vacation" in Mexico this past week, but just before I left, Dad and I had a spectacular day of topwater speckled trout action, catching 15 trout and a few stripers in less than 2 hours. Capt. Ray burned up the puppy drum and yearlings several times this past week. And the tarpon have been snapping....

.....in Costa Rica, so I'm heading that direction this week. Also good sailfishing and plenty of big dolphin, so we're going to do it all when we're there.

Several openings with the Down East Guides if you want to stay close to home or give us ring to work out the details on your big winter vacation.

Can you tell that I've been off the water for a few days.......trying to catch up in the office.

Our Fall Newsletter is now available on the home page of www.downeastguideservice.com Click on "newsletter".

Also look for it in the upcoming issue of The North Carolina Sportsman Magazine.

Working on citation applications now. If you want your red drum or tarpon citations, please confirm that I have your complete contact info, date of catch, etc.

posted by Capt. George Beckwith at 2:59 AM