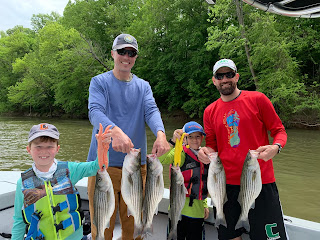 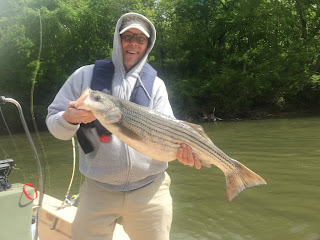 This 30 inch "buck" did not make it to fertilize the eggs of the 28 inch "sow" that was caught and released ont he second cast.

Justin pics with the kids 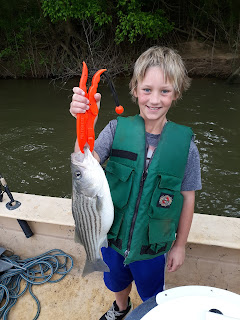 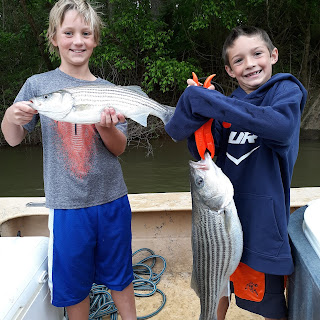 Do you think that they were ready to get out of the house?

No problem catching our keepers, did not need the bait that Greg gave us but it was helpful dialing things in.   Half of what we caught was too big to keep.   They are planning to drop the water tomorrow so that should change everything.  :)

How do you know when you have become a mountain man? 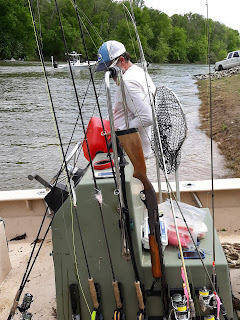 When you start putting gas in the boat after you've already put it in the water.....has nothing to do with the assortment of weapons used to pursue striped bass

We really, really, really appreciate those who are comfortable and confident enough to brave the world and go fishing.  For those who choose to live vicariously through this fishing report, we salute you and do not question the individual decisions that you feel like you need to make to keep yourself and your family safe.

Meanwhile Capt. Justin is doing his part facilitating the procurement of protein for his Covid free guests and implementing social distancing standards for the rockfish removed from the Roanoke River.

Open days available for the essential activity of fishing for food. 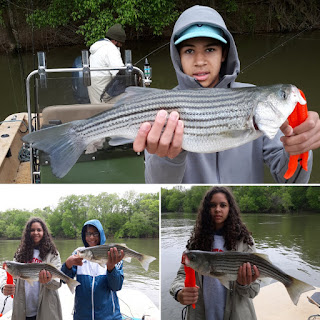 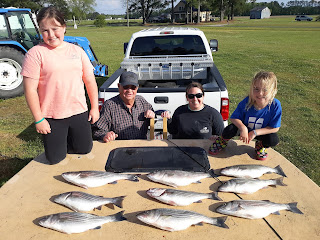 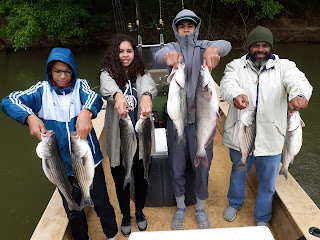 
On related matters, the fishing on the Roanoke River has been spectacular for those brave enough to fish through the Coronapanic which has yielded a 80% mortality rate on booked charters through May.

posted by Capt. George Beckwith at 8:10 AM

This time during most years would find our August and September drum season already booked tight.   We have large corporate groups who have been fishing 6-8 boats each day during the same weeks for many years.

Fearing the answers through these uncertain times, we have not been pushing for confirmations or requesting deposits.   I am anticipating cancellations.

If you know that you or your group is planning on coming, send me an e mail and let me know so that I can get your dates in ink.

If you know that you are NOT coming, I also appreciate the heads up so we can begin to fill those openings.

We have started a wait/call list for last minute openings,  reach out if you would like to add your name.

For those who have never done it, see a recent description on the fishing and the rates:


Randy,
OK, a few more details on the details.
In the Neuse River/Pamlico Sound there is no lunar tide.   Unlike many places, lunar tides are predictable and with a good understanding of a tide, anglers can predict where the fish should be on a particular tide.
The arms of the Outer Banks wrap around the shallow waters of the Pamlico Sound  and negate any tidal influence coming from the ocean.   However, we do have tides, but our water is moved by the wind.   Even a light afternoon breeze, over a few hours can change the flow of the river; a stiffer breeze can change water levels by a couple of feet; a hard southwester can leave creeks dry whereas flounder can be seen crossing the street in Oriental on a strong nor’easter.

There are several ways that we can catch the giant red drum.    The traditional way of fishing for them is using cut bait in the afternoons, fishing  through sunset.   Although this technique can be productive any time of day, the afternoon breezes move the water and , broadcast the scent of the baits over a larger area, attracting more fish than under calm conditions.   On this “afternoon  drum trip” we typically use larger boats, 21-28’ center consoles that are comfortable and fishable under almost any sea conditions that the Neuse can offer.     If there is enough wind, we often hit the shoreline for a couple of hours to catch our limit of puppy drum or legal sized red drum, maybe also a trout or flounder before setting up for the big ‘uns……unless of course you want to forego catching dinner and target the giants from the start of the trip.    These trips are typically very consistent.

The other way of catching the big ones is using artificial lures and popping corks.   The tackle is lighter and this technique involves a lot of casting, so often preferred by experienced anglers.   Success for the big drum is consistent as long as weather conditions are calm with little wind, therefore these trips are usually run very early in the mornings before the breeze picks up.    Although the guides with the big boats can also catch the big drum in this manner, a smaller “bay boat” with a trolling motor is preferred,

We also offer “split days” which take advantage of the morning and afternoon peak feeding times.   These days can be done on the same day or split over two days.    Spilt days on the bay boats are $1000 or $1200 on the larger center consoles.

Depending on the trip that you want and your arrival/departure dates into Oriental we can make hotel reservations for you and bundle that into a package.

Regarding your request for availability on Sunday afternoons through Tuesday afternoons during the peak of the season, these are the current options with first string guides:

Let me know if you have any questions or dates that jump out at you and we'll get you penciled in on the calendar.

posted by Capt. George Beckwith at 8:09 AM

Lots of little red puppy fish in the big riva. 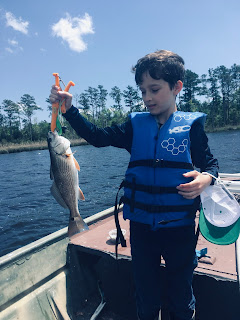 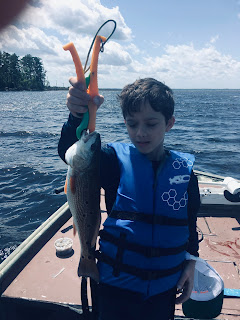 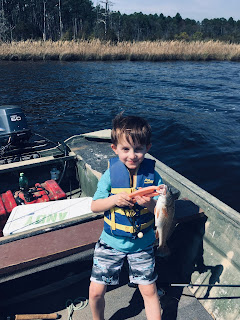 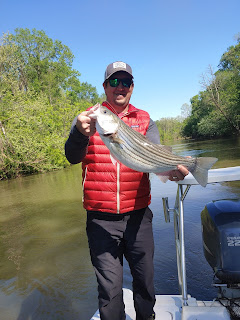 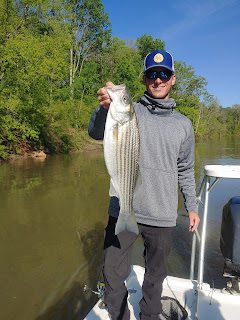 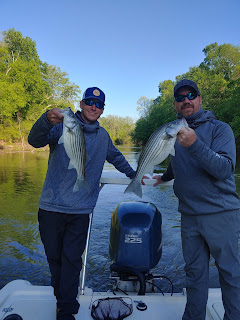 posted by Capt. George Beckwith at 8:58 AM

Live from the river with Capt. Jennings

Social distancing:   keeping these 6 striped bass seperated from their families. 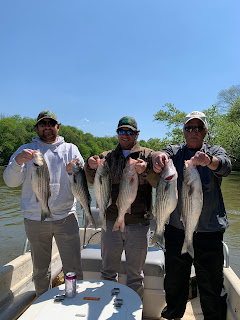 posted by Capt. George Beckwith at 8:55 AM

vote for The General

https://www.marlinmag.com/marlin-madness/   Share this on your Facebook page. It’s hokey but something to do right now. We made it to elite 8 last year. Maybe we can win with everyone in quarantine.

"We’ve already had 100+ days, it’s shaping up to be another awesome season.  Sanitized boat, beautiful river and plenty of catching." 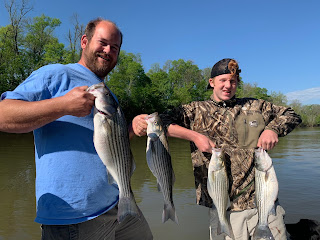 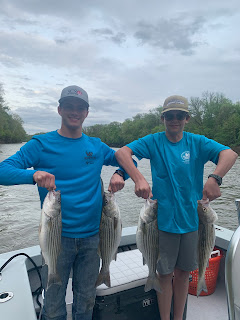 With most of the folks fishing on the Dragin Fly, we handle all of the details, including condo/private home rentals, VIP airport transfers,  private drivers and guides, tours and occassionally on the request of large groups, tips for the boat crews.

This was the case with a large group from South Carolina previously scheduled to fish on the Dragin Fly and Macushla out of Los Suenos, Costa Rica in late March.  These customers were prepaid in full, including tips for the boats.  When they were forced to cancel one month ago, like most of our custommers, they agreed to have their deposits forwarded to future reservations.

If the Coronapanic continues, there is comfort knowing that we have an emergency fund and capital available to pay the crew and the bills through these lean times.    Fortunatley for us, we are not upside down, but the same cannot be said for many in this industry who are making it through today on tomorrow's deposits.

This week I got a call from the lead customer from that South Carolina group,  Mike.   When I got the call, I feared that his group was not going to be able reschedule.

Mike said that he understood that their group had tips that were prepaid.   He had talked with his guys and they wanted to know if I could forward that money to the boat crews........I was speachless....   Breaking the pause Mike added that he wanted to make sure that the crews not to worry, that they were definitly coming back to Costa Rica and that they would tip them again.

I have heard of other stories from other guides who have had customers call them and cancel trips, asking them to just keep the deposit for their trip and forget that it was ever sent.

This has been humbling for all of us and when this is over I think that the people casting off the bow or sitting in the fighting chair will be just as thrilled to be there on the water as the guide on the poling platform, the captain behind the wheel and the mate landing a fish of a lifetime.

Thanks Mike for helping us all get there where we need to be. 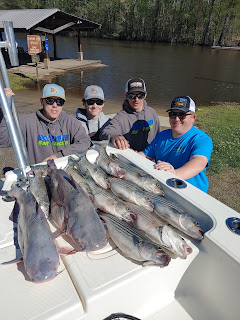