Anyone want to go to Argentina dove hunting for free?   I've got a couple openings in January for 3 days of dove hunting.  Drop me an e mail I'll send you the details.

Well, not free, you've got to get to Cordoba and pay for licenses, shells and tips.

Is that a fly rod in your hand?

Capt. Chris Kimrey getting into the action at the beach:

"hey man, here are a few trout pics from last couple of days, Jettys are pretty good and the surf is still producing too......I'll be in touch thanks!" ----Chris Kimrey 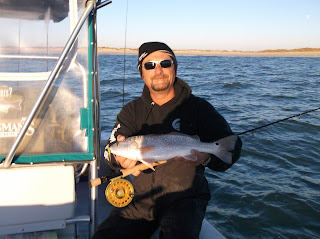 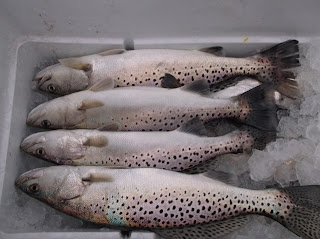 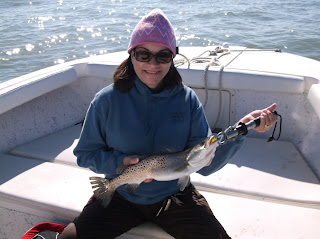 "Capt George, I hit the Pamlico River to see what she would offer and found a nice fly pattern along with some light tackle action.  Next stop potatoes." 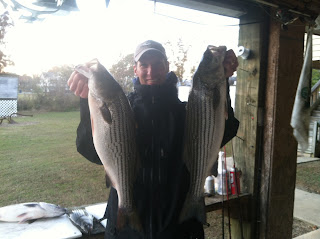 Anybody got a good recipe for rock stew?  I'll post it if you don't mind sharing some secrets.

Not every day is "fantastic".  Despite the good fishing going on up and down the coast, sometimes it is still fishing and not catching.   Saturday was a little tough at the beach, but Sunday things fired off again....in the boats and from the beach.  Below is the report from Capt. Joe Ward's Sunday trip on the lower Neuse:

"Fantastic day, around 35 pups and at least that many trout, also about a dozen flounder. "   Capt. Joe Ward

Looks like the big stripers have showed up at the Bay and Capt. Chris is gearing up to head that direction next week.  He still has some openings until Dec. 8 and from Dec. 18-23.  It's not a long run, so his full days are only $650, if you book two days, he can do it for $550/day.  Not many hotels in the area, but Chris can put you up at the house he is renting for $50/day.  Drop us an e mail if we can help put you guys together.
Bundle up and get ready to fish. 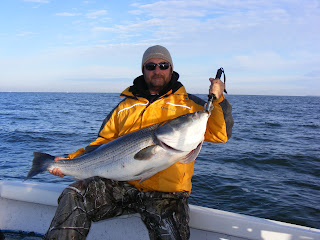 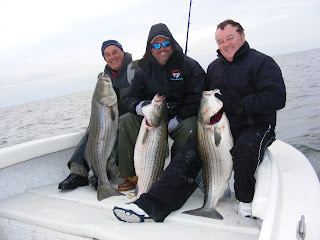 Inshore grand slam with Capt. Mitch Blake on the Neuse

Trout, stripers and red drum, that's some kind of slam isn't it?  I'm on my way south for another kind of slam, but we can still get you out on the water with great guides like Capt. Mitch Blake. 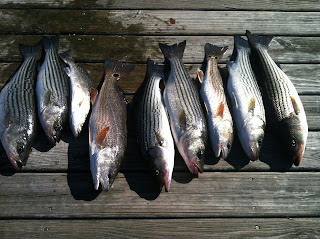 "Capt George,
plenty to do here on the Neuse, Trout-Stripers-Drum rounding out slams for anglers.  Getting them on light tackle and the fly!"
Capt. Mitch Blake

Trout fishing still good in the creeks! I fished for about 2hrs and had 7 keepers with a 4 pounder. Even though its not quite what it was its still pretty good!
Greg

spent a little time in the woods

It's been a long time and I had forgotten how much noise a leaf makes when it falls.

Sometimes while tarpon fishing, I have to keep repeating that "Sting Rays are my Friends".

I jumped at the chance to catch some baby, "young of year" sting rays for Lyndell's research described below. 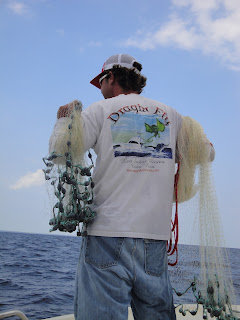 This guy won't be harassing me next summer...... 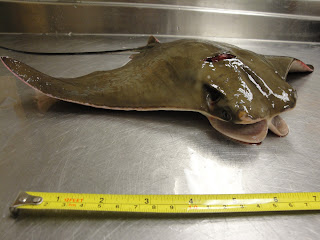 "Large population numbers of cownose rays can cause a coast-wide problem for fishermen and aquaculturists during the ray migratory season, due to the ray's reported consumption of mollusks (scallops, clams, and oysters) and crustaceans.  This ray predation may result in disturbance to the sea floor, interference with gill netting for other species, reduction of the potential for shellfish aquaculture, losses of clams in leased areas, interference with oyster restoration efforts, and loss of seagrass beds that provide habitat for other fishery species.  Cownose rays undertake migrations through the waters of North Carolina in the spring and fall, migrating north to Chesapeake Bay and beyond in the spring, and returning through the waters of North Carolina in the late summer and fall on the way south.
The goal of my project is to better understand the ecological role and trophic impact of cownose rays in North Carolina by collecting dietary consumption data in North Carolina waters.  Due to the way cownose rays extract and consume their prey, it is very difficult to identify prey items in stomach contents through visual methods.  Molecular identification techniques can improve the accuracy of traditional stomach content analysis by identifying species of prey item at the genetic level.  Specific objectives include 1) analysis of stomach contents to identify which shellfish species are consumed as prey through direct identification techniques;  2) Assess whether cownose rays are eating shellfish of commercial value in North Carolina and Chesapeake Bay by developing and applying a Polymerase Chain Reaction (PCR)-based molecular test.  I hope that my research will better improve our knowledge of the life history of cownose rays, their role in NC coastal and estuarine ecosystems, and contribute to shellfish fishery management plans". ---Lyndell Bade 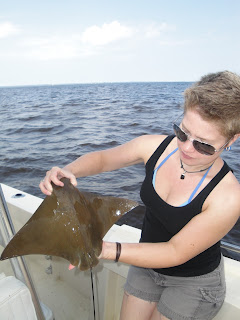 Maybe next year during tarpon season we can get the Down East Guides together and stack up some rays for Lyndell.

I'm over it.   The weather sucks.  It's blowing and cold.   I'm ready to migrate south......just hope that I haven't waited too long.   The tower boat is coming out of the water today, if I need a fish fix, I've got the skiff and the waders on stand by.......or I could just get one of the Down East Guides to take me for a spin.

Despite the tsunami-sized waves breaking on the outer bar yesterday afternoon, the sloughs were full of trout, stripers still chewing up at New Bern, but my mind is on marlin.

posted by Capt. George Beckwith at 6:37 AM

This is a link to our friend Ray Barry's travel blog.  He started Silver King Lodge and now resides in South Africa.   Pretty cool travels.

Trout continue to bite in the surf, despite the huge swell this morning, Atlantic Beach looked like Hermosa, great surf break.  Don't know how long it will last.......

Albies bit really good through Friday, despite the nor'easter.    A lot of folks see forecast of 20 kn N winds and don't want to come to the coast......their loss, its calm on the beach and a lot of times fires off the bite.

All this being said, I'm glad that I'm on the couch this morning, today it's closer to 30+ and stinging rain.....

posted by Capt. George Beckwith at 5:56 AM

Started as a striper trip out of New Bern, but the cold front and northerly gale pushed Capt. Ray up the creeks where he found the trout really good.  I'm hoping to get some pics...... 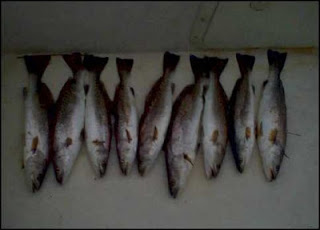 From Frank:
"We had a good time. Fishing with Ray is like fishing with your best fishing buddy. I have always enjoyed going with him, and he was great with Russ."

Yesterday I had a spin trip, so we went looking for some bottom dwellers and got this nice surprise.   Caught the albies really good on the way home, plenty of trout in the suds. 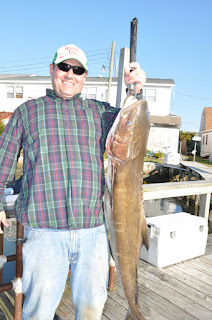 We were on 3 amazing albie bites today, in 3 different locations.  Really good stuff. 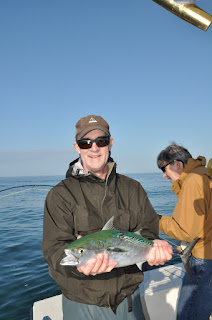 Notice the bent rod int he background, I think we ended up with 10 doubles 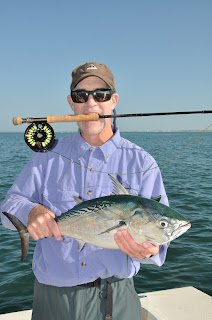 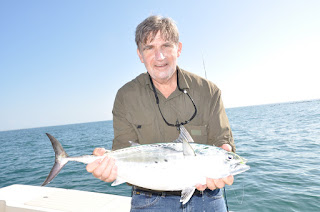 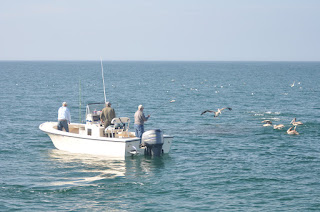 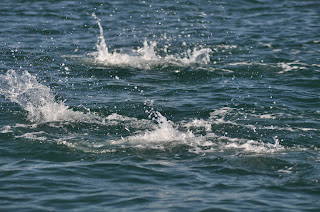 See the anchovies jumping for their life.......they didn't make it.  We stayed until that bait ball was completely devoured. 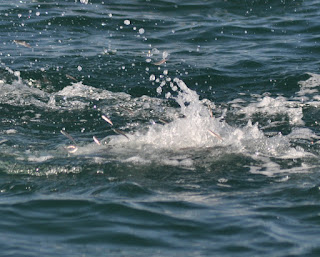 8 wahoo, 10 blackfins, a white marlin release and a sailfish release.  RUN OFF.

posted by Capt. George Beckwith at 6:34 AM 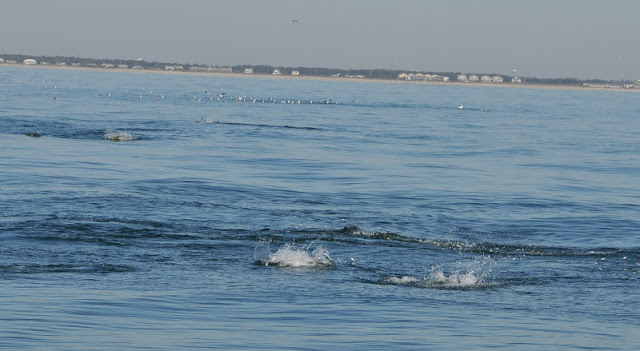 Some pics that were left on my camera: 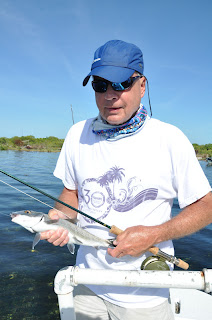 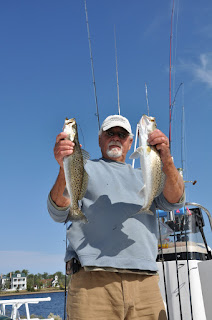 These shots were from today: 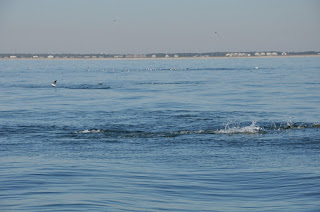 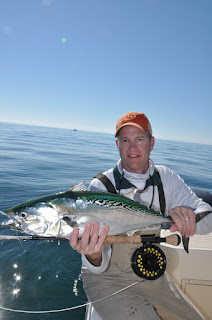 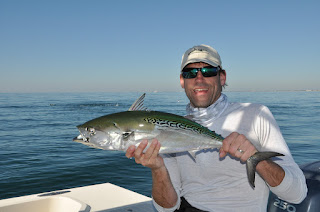 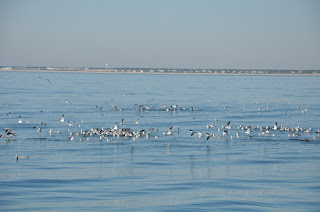 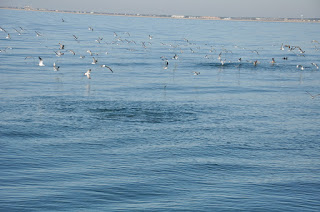 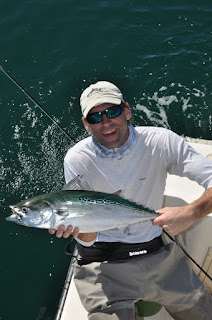 Bait balls and albies, good stuff, wish it had lasted a little longer, but it lasted long enough.  The trout were so thick on the beach, from boats and the sand, that it seemed like they were on bait balls.

When I get the call that the trout are "going off", I usually arrive just in time to urinate on the coals of the fire. When I got the call three days ago, it had been going on for that long, maybe longer, but I'm glad to have gotten in on some of the best of it.

At first, I'm sure that there were only a few anglers donned in waders, standing knee deep in the surf, prospecting various sloughs up and down the coast.  What they found there was pretty "special", at times, sometimes for hours, keeper specks up to 5 pounds were biting on literally "every" cast.

From Duck, to Hatteras, Cape Lookout, even Atlantic Beach, Emerald Isle and points further south, these easily identifiable sloughs are holding fish.   The more accessible areas may be home to as many as 50
"sand people".   I hesitated posting any details for fear of reprisals from local anglers for giving away "secrets"......but with that many anglers fishing, secrets don't last long in the fishing industry.  Everyone has a "friend" or a buddy.......who has another buddy.....who has another buddy.

Over the past couple of days, I've seen that if things get a bit crowded, there are also plenty of fish away from the crowds.   Don't be afraid to fish the edges, take a walk or a drive to find some less fished water.  If the fish are there, it won't take long to find out and you can have them to yourselves......or at least until you get "caught".

For flounder and puppy drum action, switch to a green grub or a gulp and keep an eye out around your ankles for the pups.

Nice to see the albies balling up on the horizon, will be chasing them tomorrow.

posted by Capt. George Beckwith at 8:57 AM

Just wanted to let everyone know we posted our latest Newsletter.

posted by Anna Beckwith at 7:09 AM

Lots of ablies scattered up and down the beach, specks and pups in the suds.   Good fishing the last couple of days.

Spent a couple of afternoons with the sand people.....we call them that because from the distance, a surf fisherman in chestwaders, up to his waste in water,  with the sand in the back ground, they look just like the Sand People from the Star Wars movie.

Great time with Ruddy Duck and Tide Runner there at the Cape....and with Capt. Extreme Brian, Mr. Bill and Wade from the Bill Collector.  Good times.  Future looks pretty bright for the specks and pups.

Thanks for the tuna

Good bite inshore on the albies this morning.  pups and trout in the surf.

Hot/Cold Trout bite in the creeks of the Neuse, about the same with the stripers at New Bern.  If you ain't catch'n them.....move.    Capt. Joe Ward caught and release 65 trout yesterday......he was on 'em.

Really decent albie bite on Friday, yesterday they were pretty scattered and moving fast.  Bait was also scattered, but we scrapped up enough to put a nice grouper in the box on one of our stops in search of offshore albies.  Found a few on the way in, but they were very uncooperative.

I caught a few trout in the Middle Marshes on Wed afternoon and the water did not look bad, better there than in the Haystacks.   Although we had a great lizardfish bite in the Haystacks.....nice 'uns.......every cast.

Ocean was still pretty mixed up, but some folks did push it a little bit and got out on Thursday for some bottom fishing.   Still a bit dirty on the bottom.

Albie fleet is out today and I'll have a report from them.  I may also do a little recon this morning.

Pretty disturbing reports on how our northern brothers have fared in the storm.

posted by Capt. George Beckwith at 8:09 AM