James got some local intel on a sailfish bite that was materializing to the south. We opted with our chances with them over rolling the dice with a couple of marlin bites. Lots of sails on the surface, sunning and lazily swimming around, we saw probably 20 on the surface before getting our first bite. Our ratio was not too good, 8 for 15, but good enough to hold on to 2nd place on time only. Sea Angel nudged us out with a late afternoon marlin bite to secure their lead and the win of the first leg of the Los Suenos Billfish Series. 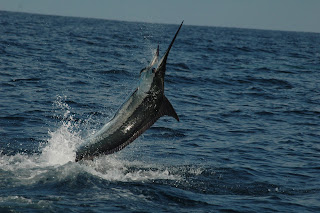 James said that we needed a marlin early, ad we got it. Pat did a great job getting the pitch bait to a nice blue first thing in the morning. ...... 4 hours later we catch a sail, then missed one sail twice or two sails once. At the buzzer Wayne hooks up with this nice little blue.
Overall, we're in 2nd place with 2300 points, just behind Daniel on the Spanish Fly with 2500.
Things are pretty tight from there on down......

Hope to have a good report tomorrow.....

Did not get a bite until after lunch, but came on pretty strong. We raised enough fish to be up front, but failed to get bites out of two striped marlin, maybe we can get the baits in front of them tomorrow. Also missed a couple of sails, but made up for it by catching 2 really nice blue marlin and a pair of sails. 1200 points and in a 3-way tie for 3rd. Daniel on the Spanish Fly is right ahead of us with 3 marlin releases, just behind the Adios with 4 marlin releases.

Sometimes just a few fish can give up some decent pics: 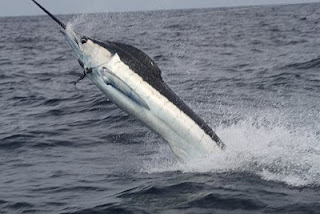 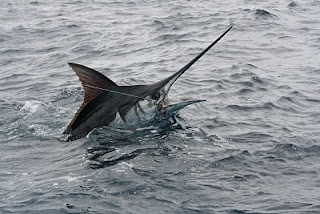 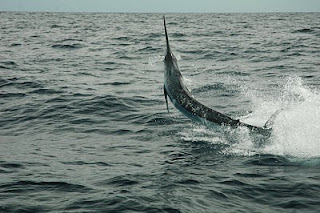 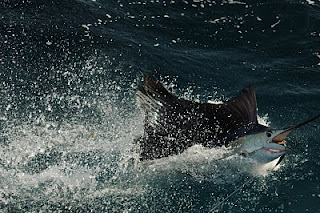 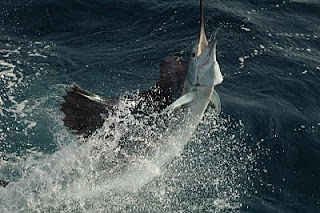 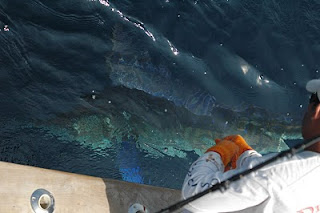 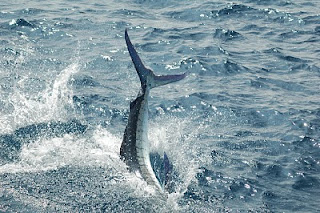 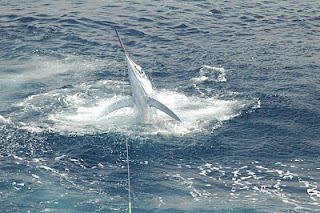 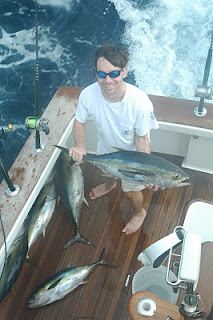 Getting a little better each day, another marlin and a sail today, but the trip saver was the 25-50 pound yellowfin that we will shortly be converting into sushi rolls.

Nothing like 2 big blue marlin and a nice stripey to turn the streak around, hope this is the beginning of a trend.

You should've been here last week....

....ever heard that? Unfortunately, my crowd that is here now is hearing it. After a great pre-full moon marlin bite, several grand slams and decent fishing, the bite has died. The last two days, the four "Fly Boats" have collectively caught 8 billfish. It really does suck. Hopefully things will improve as we get away from this big moon.

Sorry, but that's the ugly truth about it.

Be sure to see Capt. Ray

He will be one of the featured speakers at the Saltwater Sportsman Seminar in Wilmington on Jan. 29.

Pretty to look at, bad on trout

If there was a question last year about how bad the "cold stun" was to specks, there is little room for debate this year. The last two snow storms have been really tough on them with widespread reports of large numbers of dead and dying trout. As a result, the director of NCDMF has closed the harvest of specks for recreational and commercial fishermen.

I'm going somewhere it's warm!!!!!! Sailfishing is picking up, they had a double digit day on the Dragin Fly yesterday. 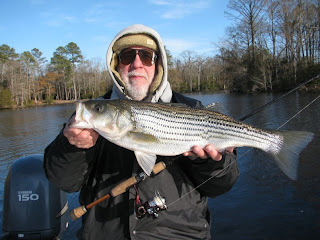 Capt. Gary had to send me this pic and report. Not to be left out, he's been having a consistent light tackle bite up the river.
"Good striper bite at New Bern yesterday afternoon. landed over 30 fish on light tackle. Not Oregon Inlet, but some nice fish!"
Capt. Gary Dubiel

from striped marlin to striped bass

Capt. Greg Voliva has headed up to Oregon Inlet with Capt. Joe Ward for some striper fishing, they caught 60 of these in a couple of days. If you want in on the action, drop us a line and we'll put you together.

I went from catching striped marlin to looking for striped bass. Although I saw a few at Cape Lookout on New Year's Eve, it doesn't look like we've got a shadow of what is going on up at Oregon Inlet. 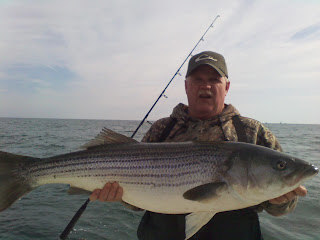 Another grand slam, 2 blues, a stripey and 4 sails, plus the meat fish. Yesterday I got to ride along, got wiped out by the striped marlin, 4 in the baits at one time, but we caught 2 of them, plus a handful of sails, some giant dorado. On the way home, we picked up a bunch of birds on the radar and deviated our course a little. Plenty of tuna, caught 3 real quick for dinner.

posted by Capt. George Beckwith at 7:31 AM

pics from the tropics 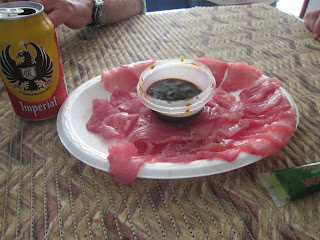 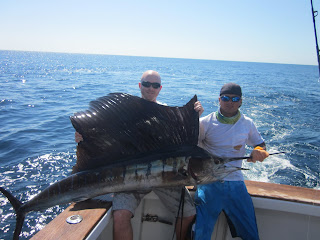 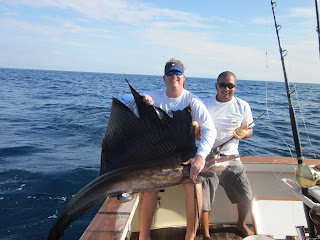 Got our grand slam today

stripey, blue and a few sails, also tuna and dorado......The Bite got us again, 4 stripeys, 4 sails and a dozen tuna.

posted by Capt. George Beckwith at 1:34 AM 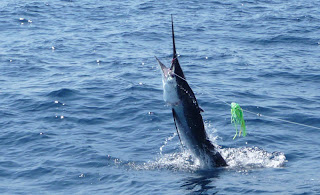 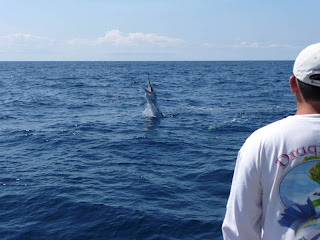 I can't keep my mind off of seeing those big stripers in the shallow water at the shoals the other day. Got to get some eels and get after 'em next week.

Meanwhile in the tropics, I'm settled into my little pad....without air conditioning.....it may get a little warm in a few weeks. For now the dry season is just settling in, the weather is great, but the fishing is sporadic.

Team Pleasants had their first day on the water yesterday, fishing the Dragin Fly and the Macushla. The Dragin Fly was "sucking hind tit" only landing one sail and a couple of dorado. Meanwhile, the guys on the Macushla caught a grand slam, including a striped marlin, 5 sailfish and the elusive black marlin.

Sun don't shine on the same dog's ............ every day. Their fishing on The Bite and The Dragin Fly today, we'll see what they come up with. I'm thinking tuna at Tsunami Sushi would be good.