Went messing with the bottom fish and aj's yesterday, caught my cobia on the way home, so the streak is alive

posted by Capt. George Beckwith at 5:42 AM

Summer Drum in the ocean is pretty cool stuff. 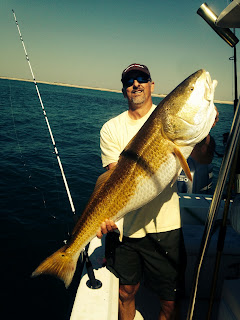 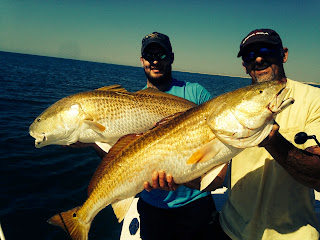 Break out the scrub brush 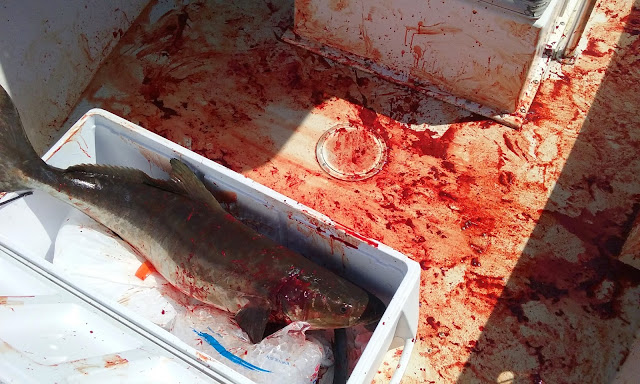 From Capt. Justin who is getting into some cobia action with his tower boat: 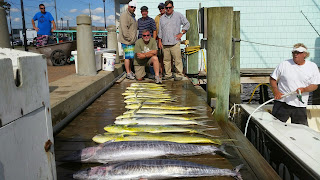 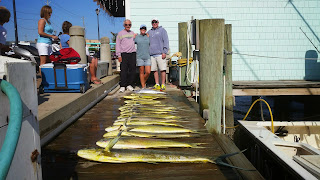 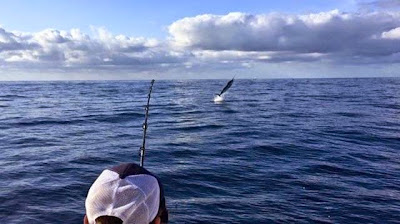 Tripled up! And enough gas to get home. 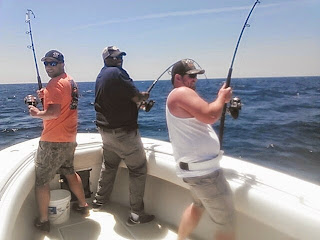 That was the story with Greg today.


Mine was a little different.  I kept my cobia streak alive, barely, but what saved the day, other than Sea Tow, was a really impressive school of giant red drum that turned a 23 Parker into a bait ball.   The menhaden were trying to get in the boat with the bulls bumping fiberglass to get 'em.   We got our triple header also, the above were aj's, which are biting really good for Greg.   We also got our cobia, a 42 pounder.

Cobia ain't the only thing in those bait balls...... 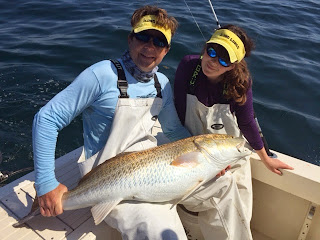 Release into the grease. 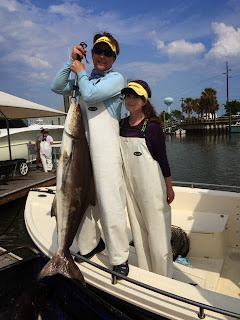 Last two days we've had at least two fish that totaled over 100 pounds.   Good stuff and hopefully more to come

Does this make sense? 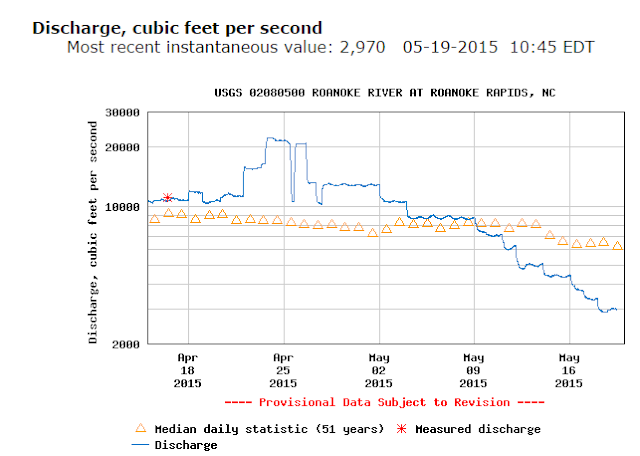 On May 22 last year, Capt. Ponytail had a "triple digit" trip on the Roanoke, this year there is barely enough water to float a boat.   All the guides have packed up and headed downstream with the stripers, leaving the hotels, restaurants and tackle shops of Weldon and Roanoke Rapids short an important several weeks of customers.

It would have been better for the fish and the fishermen if "they" had let lose half the water they were releasing when it was at 15,000-20,000 cfs and stretched out the season. 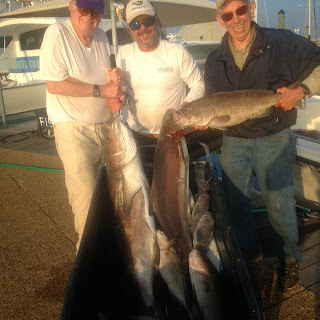 Today went east, two bait balls on the west side of shark island from which a dozen cobes were killed, 4 of which were taken by spear and skin divers in about 12 feet of water.   We charged north on the east side all the way to the fish camps, saw a couple of big bait balls full of sharks, nothing, went to the D-wreck from which we took a limit of gags, 13 keeper sea bass, 3 trigger fish, 1 amberjack and 3 jumbo sized pinfish which I was told were good eating….oh, and a couple of giant sand tigers.   On the way home we ran into a couple of bait balls on the east side of Shark Island, all by ourselves, couple of sharks and a 64 and 36 pound cobia that will not make it any further up the beach. 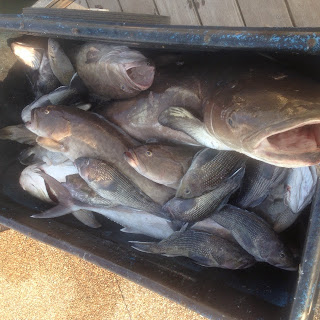 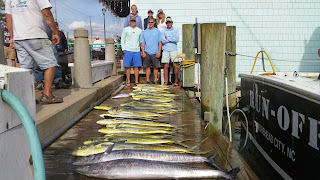 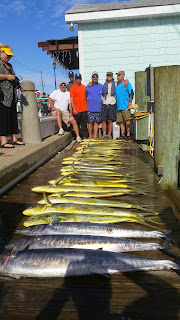 This is what it looks around the back of the Run Off at the Morehead City Waterfront about every afternoon around 5 pm.

Cobias have hit the beaches in force yesterday, we got ours on the way in from the deep.   I was tired of riding and looking and wanted to catch some fish, so that's what we did, groupers, bass, triggers and aj's.

Big drum in the bait balls on the east side and cobias from Oregon Inlet to Wilmington.

posted by Capt. George Beckwith at 5:26 AM

really amazing that there are only 3 or 4 boats on the river.

posted by Capt. George Beckwith at 8:33 AM

Start early and stay late for some of the best fly rod fishing that you can get.   Twice this afternoon I caught 8 striped bass on 8 casts in a row.  No telling how many you could catch, but for sure all you want.   When you get bored, break out the poppers, they're going off on top.

Down East Guides are available for early mornings or late afternoons any day this week. 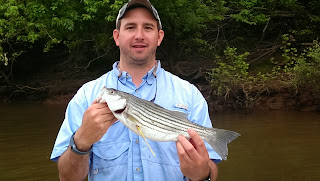 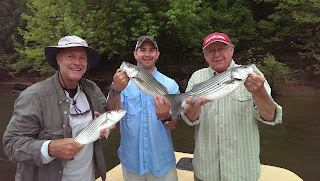 We had a great day on the Roanoke River with Justin. we had a hundred fish in the boat and five or six triple hookups. We also caught to yellow tagged fish.
Attached are a few photos from this morning.
Thanks,
Dustin

The water temps were right, the bait was there, then Ana decided to throw a party on the coast.   Pretty rough out there and I'm sure that the cobia are there also, just can't get to them.

I shoved back up to the Roanoke to play with the stripers and it's pretty darn good, especially on the fly.  They are stacked up at Weldon, tonight may be the big show, they've been spawning a little, but now that the water temp is holding in the mid 60's they are really ready. 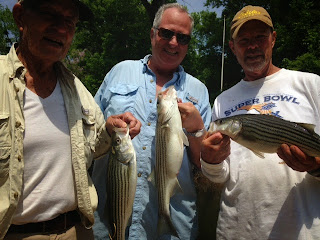 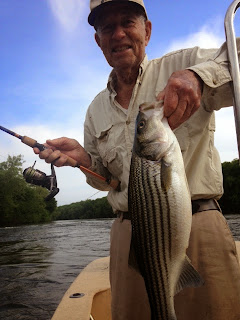 Fishing with Jennings on the Roanoke

We had a GREAT time with Jennings.  He did an outstanding job and added greatly to our fishing experience.

Thanks for your assistance and we’ll be back for a repeat performance. 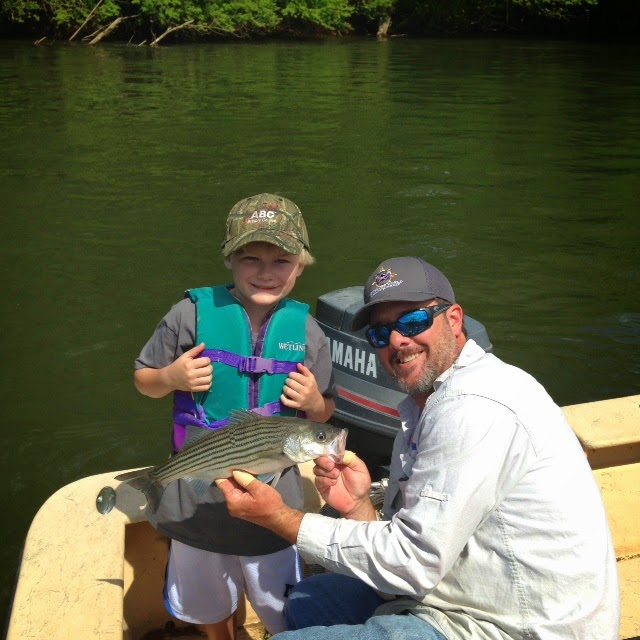 And the fish cleaning service is free 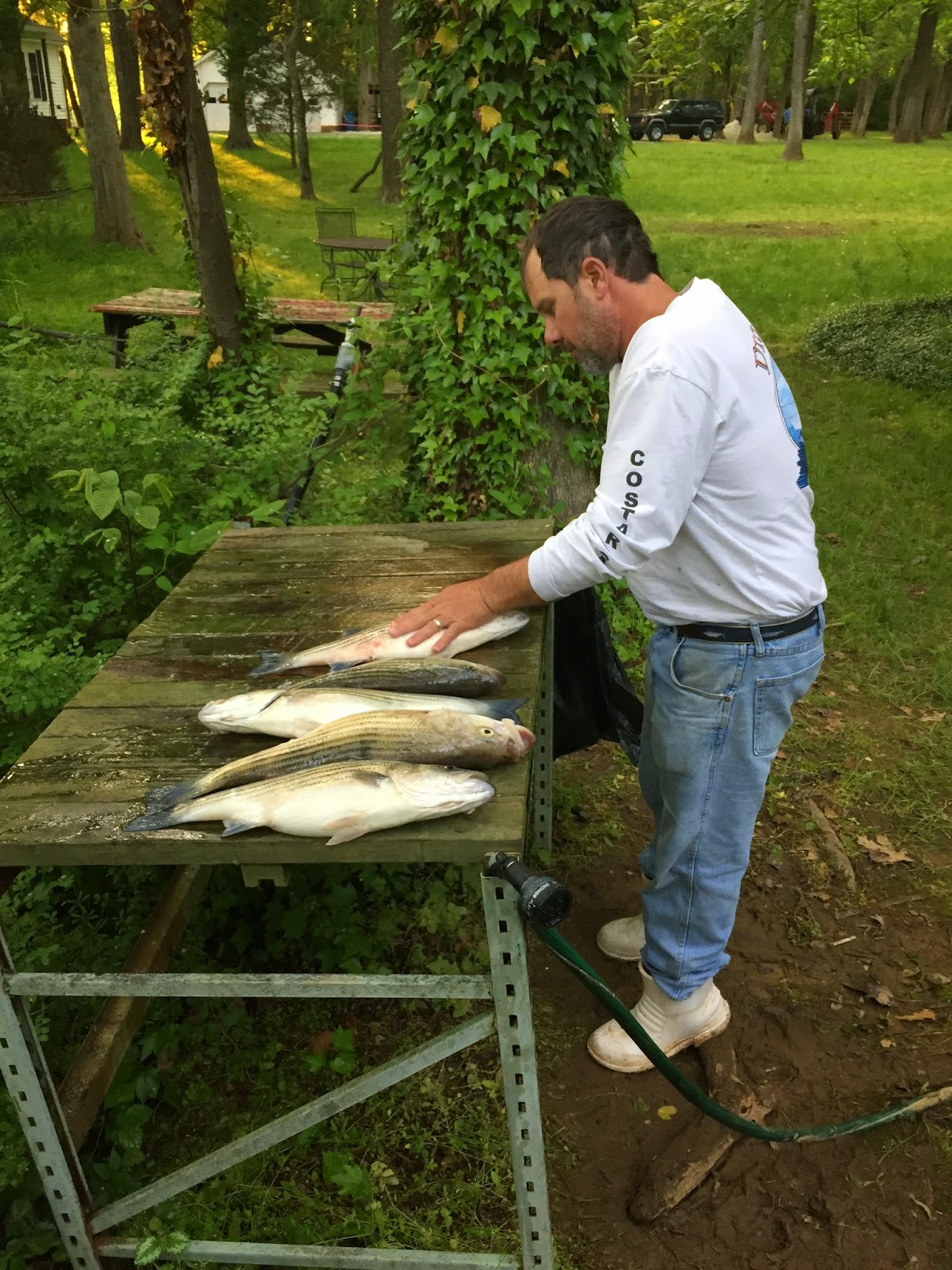 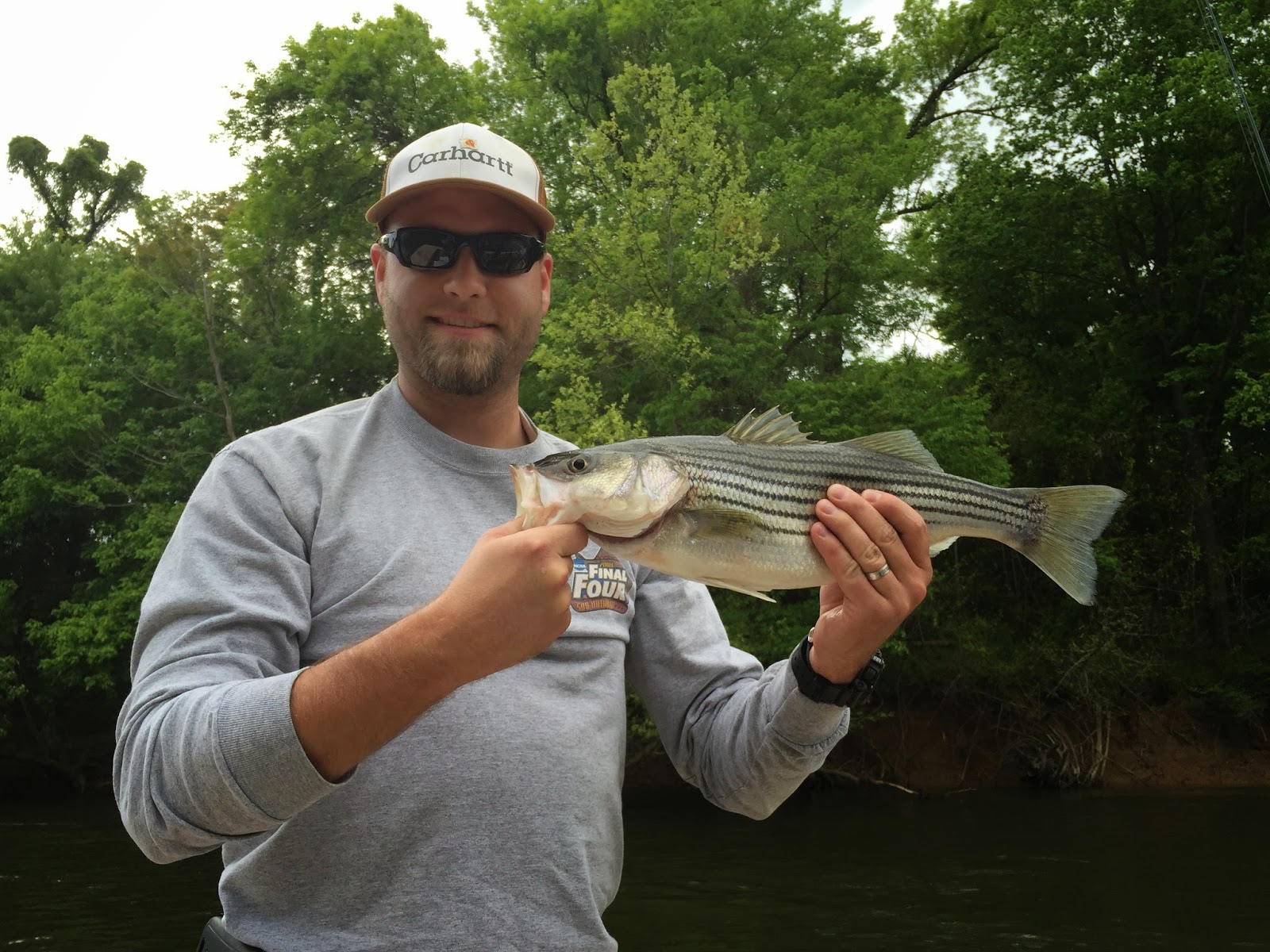 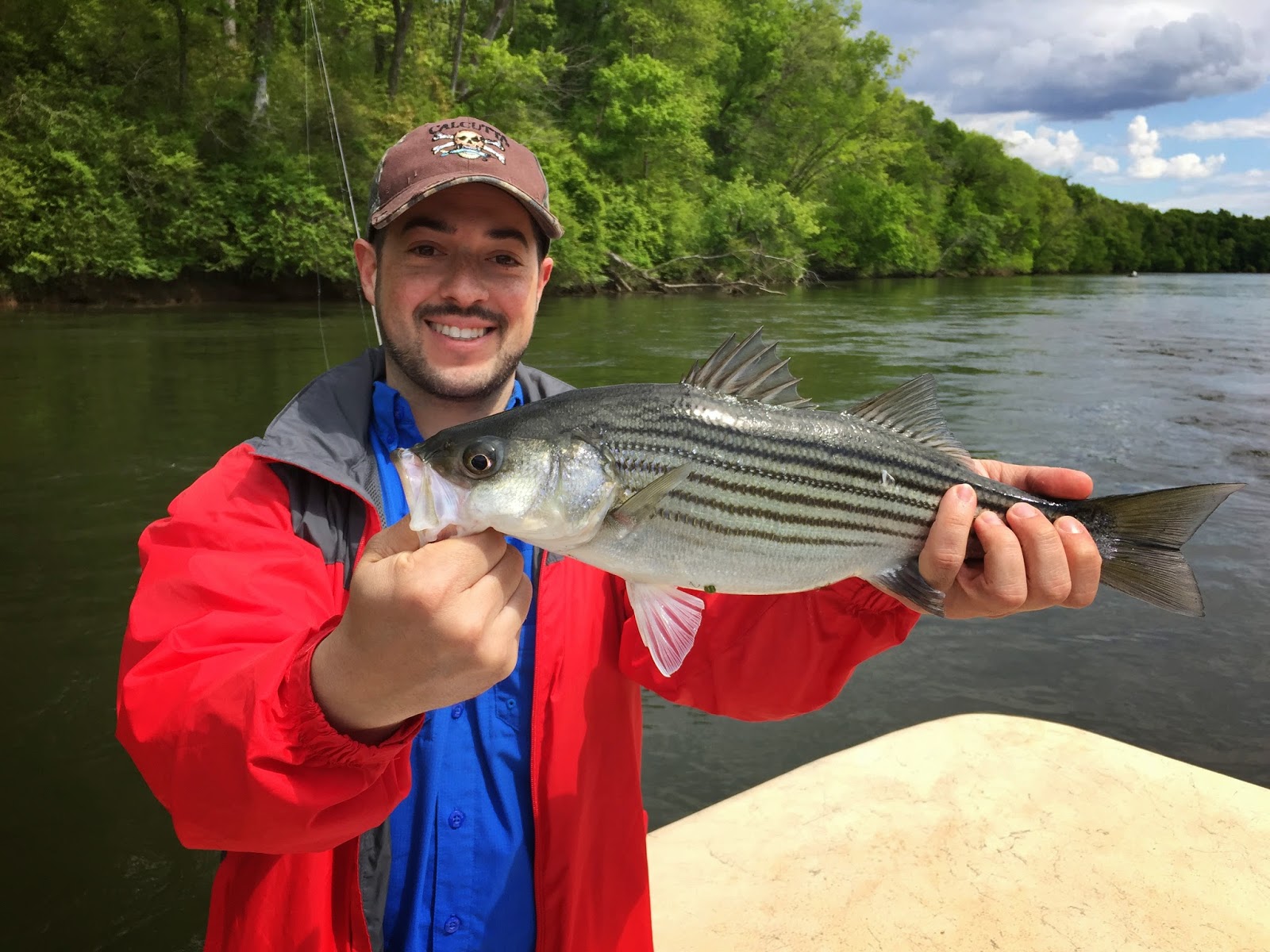 Just when you think that things are going to fire off, they go into reverse, either from cold fronts, dropping water, heck there is always an excuse.  They're falling back or they're charging up the river, but when they're moving, they are hard to get on, stay on and sometimes get to bite.   The Down East Guides have been getting what they need, banging out between 25-40 fish/half day and getting our keepers.   Now that the keeper season is closed, the parking lot will be empty and the river won't look like a parking lot.

The Roanoke is one of those places that can fire off and make anyone on the water look like a hero.  When it's not firing off, it's like fishing anywhere else.  There are still plenty of fish to be caught, but those who know what they're doing are going to get more action.

Even for good fishermen, there is no substitute for being on the water for most day light hours for consecutive days in a row.   Sharing knowledge, techniques and often bait have been keys to keeping smiles on our customers faces.  I want to thank all of the guides and "regulars" on the river for helping each other out, it's only going to get better from here.