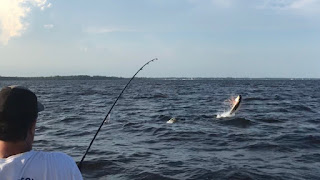 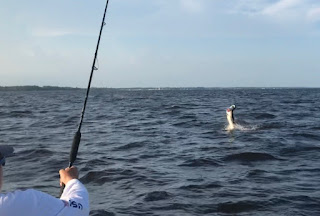 report from the funny had 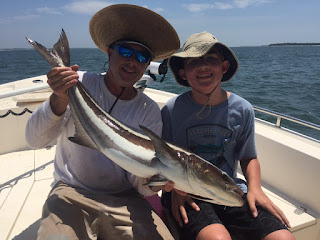 Had a quick trip at the beach and caught a nice little cobia, few sharks and rays before taking the fresh bait to the river in hopes of catching a cobia and a tarpon the same day......no tarpon, but I know I was in the right spot, right in Greg's chum slick.
The next day was spent looking for trout, I found none, nor did I find any flounder, but did catch a decent puppy drum for dinner.   In short, beating the banks was a lot tougher than i was expecting.

In Costa Rica, the Dragin Fly is off to the seamounts, report in a few days.

posted by Capt. George Beckwith at 8:31 AM 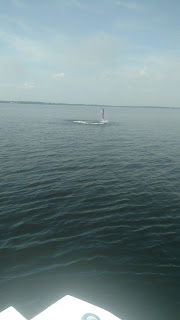 60+ blue marlin releases by two anglers in 4 days.  I don't know anyone madder at a blue marlin than him.   Pretty work.   We can get you wtih Capt. Bubba or Capt. James on the Dragin Fly, who is pretty angry at them also.   Both boats have openings for a seamount trip in July and a couple of spots open in August.   We will coordinate anglers if you are willing to share.   This is once in a lifetime fishing folks.   All the best from the tropics,
George

Capt. Bubba Carter just reported in from the Tijereta on the SAT phone, he is closing in on 50 blue marlin releases in one seamount trip.     Sounds like it is firing off.   You ready to experience it?

posted by Capt. George Beckwith at 9:34 AM

i need another lesson

I need another lesson from Capt. Jake Jordan on this catching billfish on the fly stuff.   Berto just shakes his head.   Nice day on the Dragin Fly yesterday, despite my 0 for 3 really good bites from sailfish on the fly.   I did have one get way into the backing, the whole time with the fish out of the water, but pulled the hook when he made the turn back at me.

I did catch a nice dorado and some little jacks and tunas with fly off of a floating barrel.

We had a couple of seamount trips open up, with room for one trip in July and again in August.   You can even have Capt. Jake Jordan come along and give you a lesson....

posted by Capt. George Beckwith at 6:15 AM

Excellent shark fishing......yes, even on the fly.   Ring us up and we will get you rigged up.  Very fun if you have never done it. 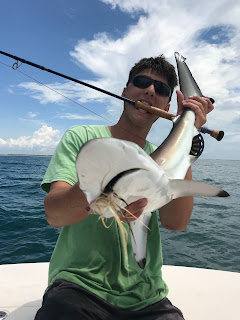 ....meanwhile in Costa Rica.   Roosterfish and a very sunny, pretty day along the rocks. 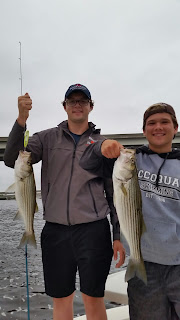 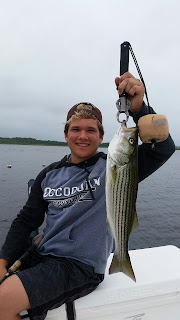 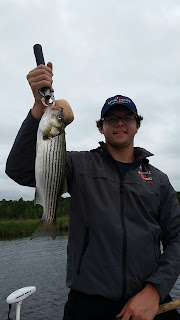 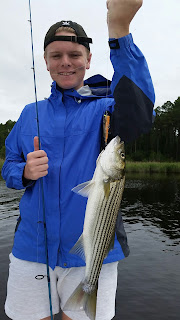 meanwhile in Costa Rica and the Dragin Fly, we stacked up some tuna to bring back home and a few sailfish and a blue marlin release in the process.

See below a video put together by our friends at Stay in Costa Rica, we had a chance to share a day together on The Crush Em back in April

posted by Capt. George Beckwith at 7:40 AM

Season on specks opens June 15.   Ring us up to book your charter now.

Just when I thought that cobia were as frustrating and elusive as tarpon, the tarpon started to torment me to remind that they are indeed much more frustrating than cobia.

Congrats to Wade Fickling, running The General, and 3rd place winner in the Swansboro Blue Marlin Tournament last week with 2 blue marlin releases.   Not to be outdone, Capt. Stewart Merritt was working as mate on the Safari which boated a 515 pound blue marlin this weekend in the Cape Fear Blue Marlin tournament.

Both Wade and Stewart are great guys and great guides, part of the Down East fleet.  Super work guys, congrats!

posted by Capt. George Beckwith at 4:58 AM

yes there are still some cobia around, including the 23 that we released a couple of days ago, helping NC State put out some tags, including 6 with radio transmitters.   Have you seen those pvc tubes hanging off of the buoys?  Those are the recievers that pick up the "pings" from these fish and others as they pass by the coast, not just cobia, but also sharks, rays, tarpon and more.   Speaking of tarpon, I saw a lot more of those yesterday than I saw cobia.   Maybe a sign of good things to come.

posted by Capt. George Beckwith at 4:55 AM