The fishing has been up and down, depending on whether you have been fishing up or down. Capt. Gary and I were fishing up around New Bern yesterday and things were surprisenly slow, a few decent trout and a few decent stripers, but nothing red hot. I'm exploring down the river this week, Gary was down there around Oriental today with this report and pic: 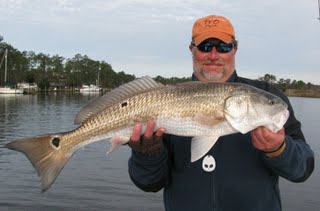 "Better fishing down near Oriental today, more trout, some pups and flounder and this nice yearling" Capt. Gary

Still plenty of openings over the next several weeks if you wanted to get out of the house. I'd love to get back after those giant red drum on the east side. The guys crushed them yesterday on the fly and conventional.

Few albies scattered from Bogue Inlet to the Lighthouse and it's been getting better each day. The big story is the giant red drum on the east side, busting menhaden on the surface. Absolutely unbelievable. Yesterday we had our turn, today it sounds like the guys have found them again. Meanwhile, I'm off to New Bern for some specks and stripers.

Scattered openings for all of the guides over the next few weeks. Full days at half day prices.

A lot of boats were in the category: "If we just had not lost that one marlin". Oh well, we had our shots the last two days. Today, we did not see a marlin, but we did catch 7 sails, enough to lock in The Dragin Fly for 2nd place. WE're pretty thrilled and on the way to the award's banquet.

We won the daily today, 2 marlin and 6 sails, had another good opportunity at a marlin and a couple sails, but are happy to be on top for at least a day. Hopefully we'll see a few tomorrow, the last day.

For those of you who are following the Los Suenos Marlin Tournament, I'm riding along on the Dragin Fly with Scott and Brent Wiggins and Mark Jones....they won't let me fish...."I'm a professional". That's a pretty good joke, they don't call me the "black cat" for nothing, although I did begin to shake that nickname last year when I caught my first marlin....but I'm a professional :)

First day of the tournament and the Spanish Fly started the day with a striped marlin, followed by 3 sails and another of the 1000 pt marlin, day 1 tied with the Clean Sweep, also with 2300 points.

Drum Roll is in second with a pair of marlin and a sail, 2100 points.

The Dragin Fly is still in the game with one marlin that stayed glued to the lure after briefly tasting a ballyhoo and circle hook. An earlier marlin made the same move, but came unglued from the lure after a short pull. One other sailfish faded away after swatting at a lure. We did catch a triple header of big bull dolphin, 133% hook up ratio on them, caught the three of the 25-35 pounders on 4 rods. That's right, one of them ate two baits.

Two more days of it.

Report from Gary: Stripers on top yesterday morning and trout still in the creeks. Capt. Ray echoed Gary's report a little further downriver where he had a couple of nice stripers and 6 very nice keeper trout in an afternoon on the water.
Sounds like all this rain did not mess things up in the creeks, the albies came back alive yesterday.

posted by Capt. George Beckwith at 9:16 AM

Life in the bait ball 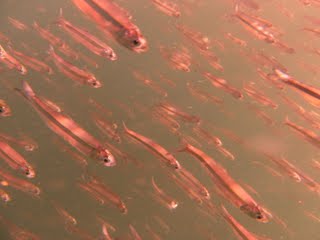 posted by Capt. George Beckwith at 9:59 AM

Can you believe that we're fishing in this crap?

posted by Capt. George Beckwith at 7:03 AM 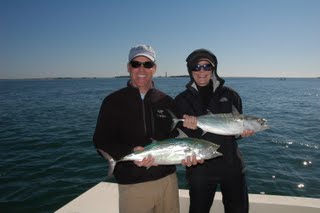 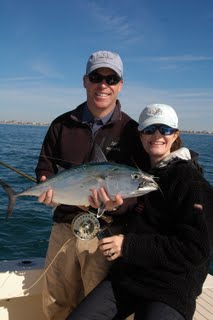 They were even biting in the rain today.....but not sure if we're going to be able to get out after them in the big blow tomorrow.

ready for the blow?

Looks like it's going to be a little snotting for the next few days, but after the blow, things should be back to normal. Capt. Ray has limited out on flounder in just a couple of hours of gigging, I've been catching a few along the beach as well as some drum. Capt. Lee and Joe have been working on the big speks, a 6 pounder from Capt. Lee yesterday. Plenty of albies on the beach. 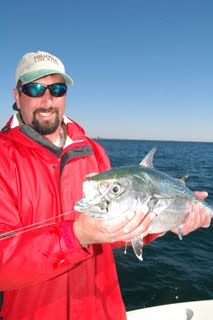 Just cast towards the pelican..... 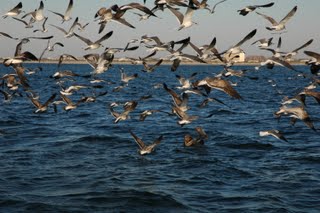 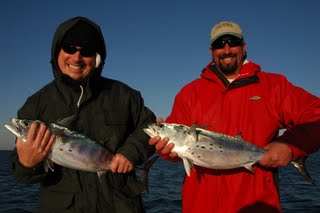 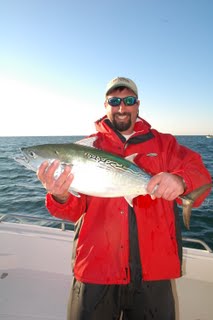 The day started as a "7" with good fishing, but ended as an "11" with three hours of continuous "epic" action. 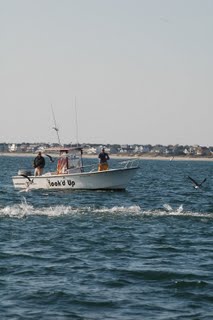 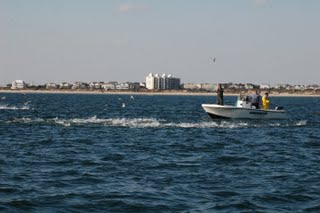 Everyone had their own bait ball, sometimes it looked like this 360 degrees around the boat, just get the fly wet and hold on!!!!! 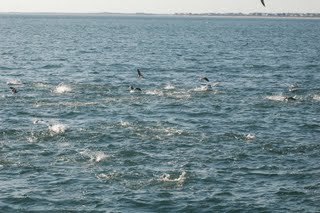 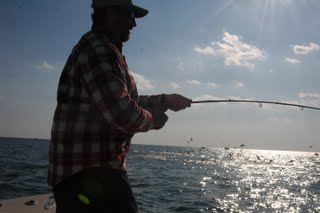 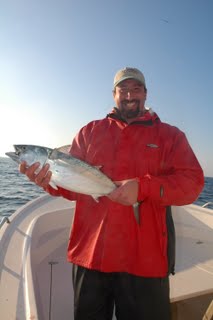 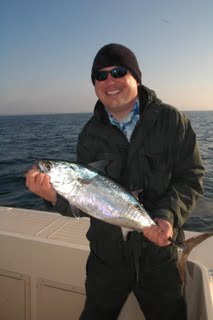 The best and most consistent in years with daily double digits.

Despite the northerly winds, there have been plenty of fish tucked up against the beach.

In the creeks of the Neuse, Gary and Joe are having some great days.

Things are starting to crank up a little further south in CR, although we can book a great boat and put together a Costa Rica package almost anytime, we have very few openings available this season on the Dragin Fly. Drop us a line to get your group on the calendar or take advantage of some special deals joining a larger group that needs 1-3 anglers to complete their trip.

Also working on finalizing a couple of groups to Argentina next year that have room for several to join and take advantage of group specials.