Why make it easy? NO NUMBERS

No sense in trying to catch those guys when it's calm, I pick my days when it's blowing SW 20+. .....not too good for me yesterday, maybe better today.

Thank you Tom Cat for sending these pics and reminding me what they look like!!!! 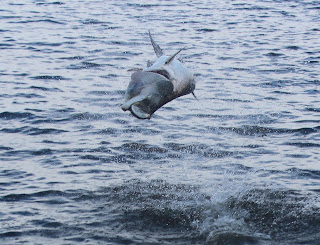 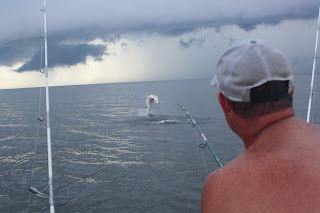 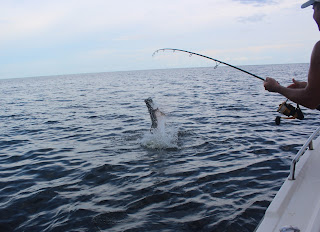 Tom Cat, Bull Pen and Big Dipper put up some impressive numbers this week, into the double digits of tarpon releases.

About the numbers.......this is a notice and a reminder that as in years past, we will NOT be posting numbers of drum that we catch this year.   After everyone on the boat has caught one or two trophy fish, that is usually enough, you've caught a handful, that means that everyone has caught at least 1.....or usually 5 for the boat.    An excellent day would be a double digit day or 10 for the boat.   That's where it stops.   It's not a competition and I don't want to turn this fishery into a competition.
NO OLD DRUM TOURNAMENTS!!!!!!

I'll turn this into a full on rant later, but let me make it absolutely clear, I do not support in any way tournaments targetting old drum or red drum over 27 inches.   This fishery, taking place on spawning fish, should not be turned into a competition.

There are those uniformed armchair fisheries managers out there who do not want to see this fishery exist and would prefer that no one targets them.   The proliferation of Old Drum Tournaments could give them the ammunition needed to implement more unnecessary regulations.
Go participate in the fishery responsibly, use Owen Lupton Old Drum Rigs or a variation with a large circle hook and a 5 inch leader with a pegged 3 oz sinker, catch a couple, but don't get "excessive".......otherwise someone may end up defining  "excessive" for you.