Congrats to the Big Dipper

Henry Frazer does it again with his 2nd win of the Oriental Rotary Club Tarpon Tournament.

I've had a lot of frustrating days of tarpon fishing, but probably none more frustrating as today.   For four hours this morning we had tarpon rolling around the boat, under and over our lines and nearly eating chum out of our hands, but all refused our baits that had hooks.

Three anglers each caught one fish yesterday and Henry Frazer knew that one fish today would not even get a check.    With day two's abbreviated fishing hours, lines having to be out of the water at noon, he didn't have much time to catch a fish and get in the game.   It did not take him long with his first release at 7:30 am, but he needed a 2nd fish......and so did we.

As Henry was fighting his first fish, we were covered up with tarpon that had a major case of lockjaw. Still sitting in first place on time,  any of the other anglers who had caught a fish could knock us into 2nd.  With Henry Frazer now one of those anglers, the heat was turned up.

By 10:30 am, our fish were still making an occasional appearance around the boat and it was hard to make a move.  At about the same time, Henry  made a bold move from where he caught his first fish and went looking for another.  It was the right move.  With only 30 minutes left on the clock, he hooked up and shortly thereafter he landed his second fish of the day, enough to convincingly win the tournament for the second time.

It is always tough to lose.....and that's what I call 2nd place.....1st of all the losers,  but Henry deserved to win.  He has put an amazing amount of effort into learning how to catch NC tarpon and he has paid his dues many times over.   Congratulations Henry, I bet he'll be out there again tomorrow.

Right now I'm trying to find a place to hang the trophy for most skates and get a good recipe for cooking crow. 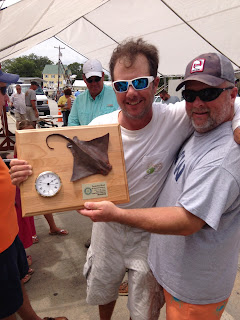