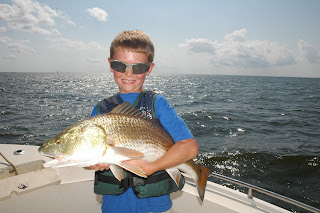 I've had very few 8 year olds on the boat with the manners, the patience and drive as the young man giving this drum a bear hug. He helped out by tugging on skates and was ready with the pliers to pluck a scale. Thanks to mom who hooked dad's tarpon, but she got her citation drum later in the day. On day two, we found the tarpon, but after 8 long hours, they just wouldn't cooperate, so it was time for Seth's reward for his patience. On the way home we stopped on a windy point and in about an hour we caught at least a dozen nice pups and yearlings. Every time a rod went down it turned out to be Seth's....unless he was already pulling on one, then dad or "Mr. Mike" got to catch one. 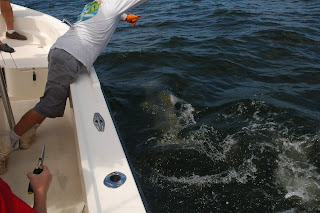 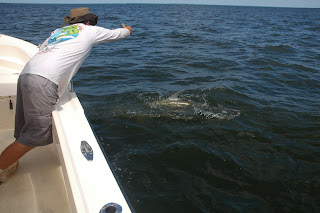 Today was another one of those Down East full days. Very rough in the sound where the tarpon were yesterday, we looked for several hours and fished a couple of spots and never saw a scale, but we did stumble accross a big drum amongst the great skate bite....Thanks to Capt. Brian, we finally saw a tarpon.....and caught him.

Capt. Brian blistered the pups and yearlings spending most of the day beating the banks, stepping out in the deep just long enough to spy that tarpon that we caught.

Clark Kent never made it out of the phone booth for the big drum...that doesn't happen often.

As Capt. Ray says, "tarpon fishing can be as much fun as eating a plate full of fire ants." After all day yesterday and most of the day today, my mouth was burning.

It's nice to get a lucky bite and turn things around.....but as Seth says..."Capt. George, there's no such thing as luck, it's all in God's hands."