Here's a pic from Capt. Gary and a recent double header on a skiff trip. 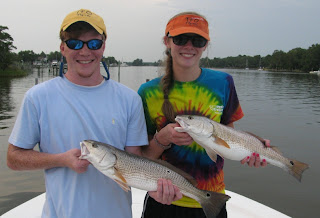 Capt. Brian had a lot more than double headers today, he got into the big drum and on 3 different occasions had multiple hook ups. His one customer ended up landing 15+ of the many drum that they caught......

We caught a tarpon, pulled the hook on a tarpon and jumped one off. The two that we lost, I set the hook. The one we caught, was on a rod that Brian lent me this morning and hooked by Wilbur. I was ribbing Brian a bit, telling him that all his big drum didn't add up to a tarpon......so he caught one right at the end of the day as both of us were getting in the lines.

Many thanks to Aunt Bev Perdue who announced today that PCS would NOT be coming to Morehead City and building a molten sulfur processing and shipping facility.