First a special thanks to Dan and Donald at Custom Marine Fabrication in New Bern. After 3500 hours of hard beating, I developed a stress crack in the tower they built for me. In less than 3 hours, they've got me back on the water. Looks like the winds are laying down, I'll be out there tomorrow with the Dream Team and Madam Commissioner.


Hear is a pic from Meagan, a phd student at Duke, working with bull sharks in the Neuse River: 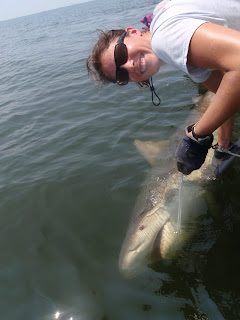 "We went out for the first field day of the season last week and look what we got on our first set... 2.5 m mature male bull shark! Caught him on a piece of barracuda on a drumline. Right around Turnagain. I implanted a transmitter and we were able to track him for about three hours. Very exciting!."

Meagan would appreciate any information on recent bull shark sitings in the Neuse River/western Pamlico Sound. Shoot us an e mail and we'll put you guys in touch.