The good sail fishing that we had around the full moon has fallen off to a consistent bite of 5-7 sails and a couple dorado/day.....with the exception of Sunday, which was a strange day. It was the first day that I can remember that the Dragin Fly failed to land a billfish. It happens sometimes when you're trying to be the hero, sometimes you end up the zero.....also, it rained that night. I mean it really, really rained, more than I've ever seen in February.

Monday morning was dreary, rainy, cloudy and a bit breezy. At daylight, myself, Pat and Wayne were standing in chest deep water trying for my snook. No bites. Our panga picked us up from the beach and we headed to Punta Mala with a dozen live mullet and a couple of rods rigged with poppers. After about 30 minutes of slow trolling mullet and casting poppers, someone turned on the switch. For two hours we had spectacular topwater action on the roosters, hooking a dozen BIG roosters, catch 5 and about a dozen jacks, mostly on poppers, with vicious bites from multiple roosters competing for the popper.

By mid day the skies cleared and the bite died, offshore it was back to normal, with the daily quota of 6 sails and a dorado. Same today.

Here's a picture of the groupers that we bagged on the way home the other day, nice to have something to eat other than dolphin each day. 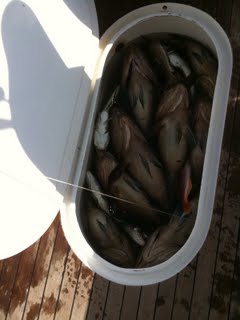