I wanted to repost this as I have referenced it in the newsletter and this post was bumped off due to all the Africa pictures. 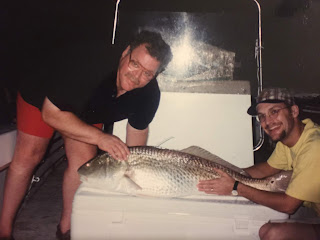 My first customer.
I show up at the dock, still wearing tennis shoes back then, but the white boots weren’t far to follow.  Just out of college and I am fired up about my first official trip as Down East Guide Service.   As I pull up to the ramp, my one customer is waiting, small igloo cooler at his feet, half a stinky un lit cigar being chewed from the corner of his mouth below a big mustache.   A tent-sized red rain jacket covered up the enormity that was Rick Goines.
As soon as I swing through the boat landing and wheel around the 60 mph bass boat from which I was guiding in those days, Rick is yelling at me.
I didn’t know at the time that he wasn’t really yelling at me.  This may have been in the early days of his hearing loss and to compensate for not being able to hear, he would raise his voice.
Before I get the boat in the water Rick informs me:
“Beckwith, I’ve fished with a lot of guides before and I know how you guys operate”.
I didn’t dare divulge that this was my first for hire trip.
Rick went on, again, with voice raised loud enough that I and everyone else in the parking lot heard it
“You   guides are all alike.   You go here, you go there, you fish a little here and you fish a little there.  Then at the end of the day, you go to the Glory Hole.   Well, Beckwith, I like action and you can just skip all the looking around and take me to the Glory Hole right now!”
I slipped the boat off the trailer, told Rick to make himself at home and parked the truck, wondering all along if I was cut out for this kind of berating.
We left Lawson Creek Park and caught a livewell full of 3 inch menhaden just a few yards from the dock.   Rick commented on the large amount of bait we were bringing and if I expected to catch a fish on every one of them.
We blasted off up the Neuse River and across to a huge array of pilings that are now all gone and replaced with a modern marina.   Twenty years ago, the pilings we idled amongst were the remnants of a time long ago.    Perhaps 150 years ago or more these pilings supported a huge loading dock to which ships under power and sail loaded and unloaded their fares.   Now, nothing remained above the mean water line, but below, the centuries old pilings were encased in barnacles and mollusks, all with shells and sharp edges.
At lower “tides”,  the tops of rows of hundreds of pilings would be revealed, but at times of higher water they would be barely visible if at all.    It was a matrix that ate lower units and gouged the bottoms of boats who got too close, so no one fished there.  But, if you knew how to navigate through the pilings and towards a drop off that went from 12 to 6 feet, then you had a chance of an epic day.
A drop off and structure, like a lot of barnacle encrusted pilings,  equals striped bass; a lot of striped bass.   They wait in the pilings to ambush baitfish that would swim along the drop off.    The problem for fishermen is that if you cast anywhere near the pilings, a 24 inch striper would pull you back into the shell laden poles and cut your line.
Rick already had a rod in hand, waiting for a bait to be put on his hook as I explained the plan.    I dipped into the livewell and broadcast a dozen live peanut menhaden into the water.   They were thrilled to have escaped their enclosure, then terrified to be free and all alone.    They made a mad dash for the security of the pilings, unbeknownst to them, behind every pole was a hungry striped bass.
The whole area around the boat erupted with striped bass as they gave pursuit to the baitfish and flushed them out into the open.  For hours Rick and I caught fish and we laughed and caught fish and laughed and caught fish in the Glory Hole.
Rick was there for me buying fishing trips when he had no business buying fishing trips.   He was my greatest ambassador and anyone who knew him, knew that he loved to fish and he told them about me.   He built me up bigger than I was and made me famous on the radio and with marketing opportunities I never would have considered nor could have ever afforded.
We shared a lot of great fishing and a lot of great fishing trips.   Rick loved the action of a hot bite in the Glory Hole, but he also had the patience to wait for it.   He would keep casting, no matter what.
The most memorable trips for Rick and for me were the time on the water that he was able to share with his son Rich.   Although Rich’s independence in life may not have led him down the easiest paths, it was that independence that Rick was so proud.    He was proud and confident that no matter what was thrown at him, his son Rich was going to make it.
Don’t know what to say, but I’ll miss him.  I imagine he is sitting behind a pile of red hot Jimmy crabs or sitting on the bank of a heavenly stream waiting for the first shad of the year.
Keep casting. 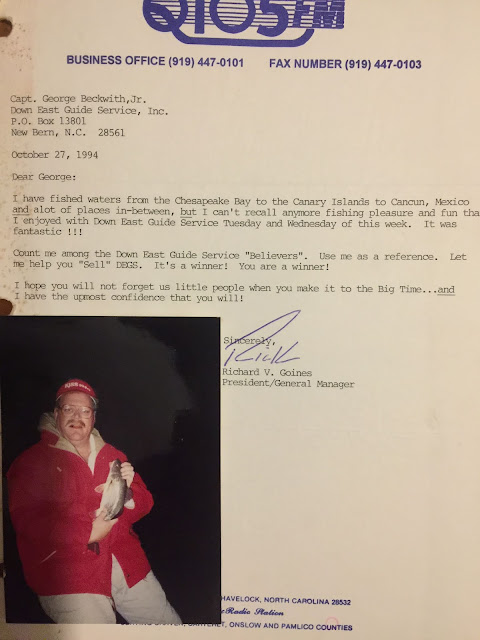