The Rant:  Chapter 4
In the late 90’s the secret of the Pamlico Sound Giant Red Drum was getting out.   For decades surf fishermen have waited in crashing waves and foul weather for the bite of a lifetime.   They would wait sometimes for days and especially at night for the bite of a trophy-sized fish that occasionally would turn into an epic blitz of multiple hook ups.

A wave of rumors swept across the sound to outer banks drum fishermen that a few fishermen were reporting double digit releases of giant red drum in the protected waters of the Pamlico Sound and Neuse River.  These rumors rolled through the fishing community, across the state and the country and lights from the boats of drum fishermen began to dot the shoal around Swan Island at dusk.

As this fishery began to explode, some biologists expressed concerns over the increasing effort on what could be an important spawning population.   Until Anna’s research, Chapter 5, it had not yet been documented that these fish were spawning in the Neuse River and Pamlico Sound.

Our tagging study documented that at the very least we were fishing on different schools of fish, schools were mixing  and that these fish had a much larger range than limited to Swan Island Shoal, where most of the drum fishing effort was concentrated.   However, our impacts on the individuals that we were catching were unknown.   Most anglers were still using j-hooks which gut-hooked a large percentage of big drum.   What was the fate of those deep hooked fish?

Our tagging study proved to be very difficult and we were limited in what we could learn through the tags, so the focus of our study shifted to learning about mortality rates, circle hooks and how to take better care of our state fish.

For the next three years we had two holding pens established, one on the south side of the river near South River and the other on the north side, near Lighthouse Shoal.   In the afternoons we would watch the boats pass us by and run the many miles to Swan Island.     Each pen had a permanent water quality measuring device recording temperature, oxygen and ph.   We had a mobile unit on our boat and would record the data at every fishing location.   We also recorded the fight time, handling time-- the amount of time that the fish was out of the water while we were measuring and tagging it and the transport time to the in-water holding pen.    Initially we would hold them for 3 days, but all mortalities occurred within the first couple of hours, so that time was eventually shortened to one day. 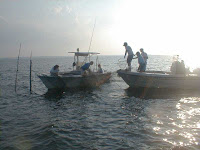 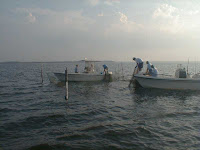 We primarily used j-hooks in this study so that we would have a sufficient number of deep-hooked fish to observe.   Regardless of the fight time, including some fish that were caught on 4# and 6# test, regardless of the time that these fish spent on the deck, waiting to be worked up and put in a transport tank, regardless of the time it took to get them to the pens, these fish proved to be extremely hearty.
The only thing that they cannot survive is a j-hook through the heart or laceration of the liver, causing major internal hemorrhaging.    In three years, all the red drum that died except for one was deep-hooked.   The one exception was a fish that I dropped on the corner of the gunnel so hard that we made a note of it in the data.     We were very careful with handling these fish, not lifting them by the gills and carefully supporting them.

Although more surprising to biologists than to drum fishermen, giant  red drum did not succumb to long fight times and rough handling like other species.   What was shocking to all of us was the very high survival rates of deep-hooked fish, at least over the short term.   One drum that was deep hooked and took to an aquaculture facility for longer observation expelled a j-hook that it had injested…..probably just as they do blue crab parts.  If you are going to live to be 65 years or older and eat whole blue crabs for a living, you better figure out how to get rid of a claw stuck in your craw. 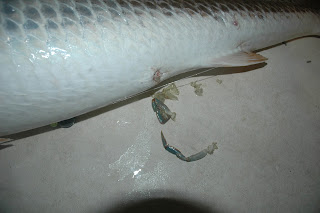 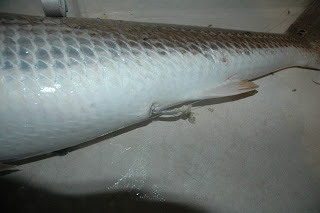 Our study showed that deep hooking rates, while using a 7-0 j-hook, a 2 foot leader and a 2 oz. sliding weight was 50%.   There had to be a better way and circle hooks were coming on the scene, but they were not the answer.   Same rig, 14/0 Mustad circle hook, deep hooking was cut in half to around 24%, but this was still not good enough.  The best reduction in deep hooking, only 11%, was with a 16/0 Mustad, the same hook that Bluefin tuna fishermen were using.   Then Owen Lupton introduced me to his rig. 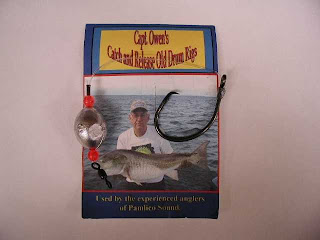 Prior to retiring, Owen Lupton taught a commercial fishing occupations class at Pamlico County High School where he taught young kids the art of being a working waterman.   In addition to how to make crab pots and hang nets, he also taught ethics and tested new techniques to reduce bycatch.   The school even had a shrimp boat that the kids would work on through the summer, raising money for the class.  It was from this shrimp boat on a July day in 1976  that Owen and a student of his named Rick Caton caught the first tarpon landed on rod and reel in the Pamlico Sound.

When Owen gave me a handful of his rigs, using a circle hook almost exactly the same size as the 14/0 Mustad  that we had tested, a 3 oz weight that was crimped in place so that the leader was only a few inches long,  I nearly dismissed it.   He insisted that I try it.   Because we already had good data on a similarly sized circle hook, I copied Owen’s rig, making it up with the circle hook that we were already  testing.   I was amazed at the results.    Effectiveness did not seem to be hampered, but after several hundred giant red drum releases, only about 4% of them were deep hooked.

In our study, of the deep hooked red drum, nearly 12% of them died.   If 50% of the drum being caught on j-hooks are deep hooked, then the overall mortality is about 6%.   That is unacceptable for a fish that lives so long and is so important to the future of this fishery.   With Owen’s rig, IF the mortality rate is the same as the j-hook, but we are only deep-hooking 4% of the drum, then we can get overall mortality rate to less than 1%.......hence the current regulations of mandatory use of short leader rigs while fishing with bait at night, which is when most drum fishing occurs.

A short word on drum tournaments and the corking craze:
Because there is a mortality rate associated with fishing for giant red drum, the more you catch, the more you kill.   People less experienced at fishing for them and handling them will kill more fish.    Encouraging people to catch as many as they can……especially for a prize…….is encouraging people to kill as many big red drum as they can.    Fishing for these fish should not be a competition.   Just ask some of those old timer surf fishermen  standing in the waves about the hopes of just getting that one bite and appreciate every bite that you get, not just the next one.

Regarding the popping cork craze….... Over the past three mornings I have opened up what I have been referring to as Pandora’s Box……and I’ve liked it a lot.   I’ll have to get the key from Gary and have a couple of drinks of Polish vodka before writing that post, if he doesn’t write it himself.    Although many locals have occasionally caught a big drum on poppers and popping corks, no one has pursued how effective it can be under the right conditions.   I’ve got to give it to Gary, he started a wave that is going to transform this fishery.
Myself and a lot of other drum fishermen have been shaking our head about what was staring us in the face and we are nursing our bruised egos from not having come up with it ourselves.

I have heard criticism that some anglers are using tackle that is “too light”.   Although I recommend using tackle heavy enough to wear the fish down, at least in the 20# class, based on my observations,  it’s better for an angler to take a little longer landing one fish than a boat load of people trying to catch as many as they can on heavy tackle.   Even using tackle too heavy and clamping down on the drag can be more harmful to a drum with a hook in his gut, ripping and tearing  internal organs.

Wow, this was a long one.   Next Rants may be by guest speakers.