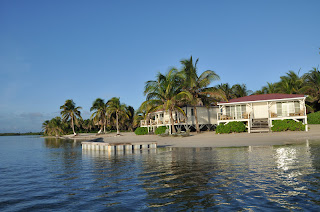 This is where I was standing when I hooked my first bonefish of the day.   Anna took our guide and the dive master and went out for a morning of scuba diving….I opted to wade the flats in front of the cabina with my dad.

With the help of the great guides here at Turneffe and numerous bonefish schools, sometimes with hundreds of fish, I wanted to see if I could do it on my own, maybe point out a school for dad.   I felt like I had a decent shot at it and was thrilled to hook up with my biggest bone of the trip only a few minutes after stepping into the water.  After blowing out that school of bones, we wandered down the flat and I saw what looked to be a huge sickle-shaped fin of a permit on the other side of the lagoon.

I have found that my passion is with the permit.     I caught my first on the fly here last year after a long two days of casting and multiple refusals.  The permit here in Belize are plentiful….meaning that an angler can have multiple shots during the day, but there is nothing easy about them.    My  permit last year was on the deeper flats outside the mangroves  and from the boat.  Even when casting at schools of a hundred or more permit, they don’t always eat and can be extraordinarily frustrating.

I had no idea that catching them in that deeper water was the “easy” way to do it.  On my first day here, I was introduced to stalking them on the flats.   They are very wary, but much more so when in only a foot of water.   They are often hard to see, only a slender fin protruding the water’s surface for a brief second or two.  After spotting one or two, perhaps three traveling together, the hunt begins.  They have to be stealthily stalked, sometimes walking more than 200 yards to get in range for the perfect shot.  Then you have to make the perfect cast…..which is a struggle for me.   Chunking a 10 wt at albies or a lobbing a sinking line on the Roanoke is far from quietly dropping a crab fly in front of a permit at 60 feet.

Even with the right cast, refusals of your offering are more common than a bite.   When the bite does happen, you’ve got to hook them…..without breaking them off after all the pent up adrenaline and enthusiasm is suddenly unleashed on both ends of the rod.  Keep it tight, put him on the reel, deep into the backing, deal with all the obstacles of the flat such as coral heads and mangroves, then beat him down…..again without breaking him off.  It’s not an easy thing to do.

Sure enough, what I saw was a permit on the other side of the lagoon, but I had no crab flies with me, surely a well-placed cast with one of the larger bonefish flies could get a bite.  I successfully stalked within range, made the perfect cast and bam, I’m hooked up with a 6 inch snapper.  The permit blows out and away, off the flat as I dehook my little snapper.

I’m beginning to “get it”, when fly fishermen claim that they are satisfied with merely the opportunity and that they don’t have to measure success with how many fish they actually catch.

Same tide tomorrow and I’ll be on that same flat, but I will have a crab fly or two in my pocket.