Pretty impressive fishing by Jim "Never Enough" and Henry Frazer. In 6 days of fishing on two different boats, they totalled over 100 tarpon releases......and these weren't little ones. Lee Smith fished 8 days and landed over 30 on the fly.

Got a note from Capt. Brian Harrington on the Run Off that he is open this Saturday if anyone wants to get into the wahoo action.

Also, Capt. Gary Dubiel passed on an interesting speck report about some tag returns that he just got:

"My second return from VA this Summer. Both fish tagged in Oriental this spring.
Tag return from VA on Sept 30th was recaptured from the Piankatank River in VA. It was caught yesterday by a VA guide. Fish was 23.5". In the same spot the day before he caught another fish that was tagged by Ricky Kellum in February in the New River up near Jacksonville. Pretty neat that two fish tagged in different parts of NC at different times ended up being caught at the same time and same spot in VA."

Here is a pic of one of several snook from one of the Lee and Richard, who were also at the lodge we were tarpon fishing, but they stayed in the jungle and chased snook on the fly. 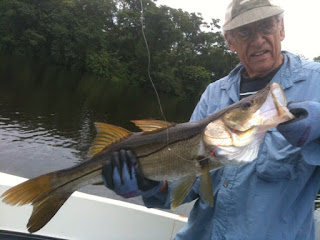