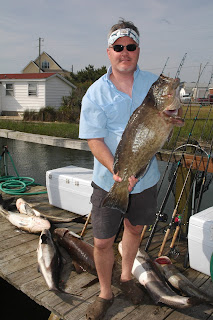 Cool water moved in on the big bite that we've been on, but we found them a little further offshore. Not sight casting, but pretty cool dropping down live baits and jigs, occasionally catching one that would follow a hooked fish up to the surface. The nice surprise was the three grouper that we caught, two of them in the teens, 18 and 13 pounds, plus 11 cobia.

It's also good to hear of several fish being caught down the beach which will be protected from the NE winds that are forecast this upcoming week.

Meanwhile in Oriental, Capt. Gary Dubiel had a good morning with a 4 pound trout and ran accross a school of big drum in the Neuse. Capt. Ray Massengill and Capt. Joe Ward had a two boat trip further downstream out of Jones Island. Joe beat up on Ray a little with trout and flounder, but Ray pulled it off at the end with a handful of nice keeper pups to add to his bag.