A lot of really nice fish on the Roanoke this year, recently they have gotten skinnier but that has made the ones there very hungry, especially on top water with multiple explosions per cast.   Really spectacular fishing if you are not afraid to tear up something getting to where they live.
I finished up the season Thursday, Friday and Saturday with top water and fly action that could not have been better.   Some pics to follow.
On Sunday I swapped gear and boats, putting in the Parker in Oriental with Hatteras Island punched in the GPS.   The Pamlico Sound did not disapoint reminding me what a 20 knot wind looks like at about Brant Island Shoal.   I donned the full body condom, put on my mask and snorkel.   At about Royal Shoal, Gypsy, our 4 month old yellow lab puppy looked up at me wondering why se signed up for that crap.
Passing Ocracoke I spied breakers on shoals which broke down the waves and  shettlered sloughs.    I climbed up in the tower and picked my way around the duck blinds, pound net stakes and accross Hatteras Inlet to my home for the next three weeks, Oden's Dock.
I should get caught up on the computer work this week as I am here to cobia fish and not play with puppy drum and trout.   I'll leave that to the locals who know what they are doing.
Regarding the puppy drum and trout fishing, it appears to be epic from New Bern to Hatterass and all points in between.  As good as anyone has seen it.   This excellent fishing, espeically the pups, shoudl remain consistent through the summer and into the fall.
Even some big drum are being caught within striking distance of Oriental.   The best of the big drum fishing season, August and September is pretty much booked so if you have not yet made your reservation, we are now taking reservations for next year, 2022. 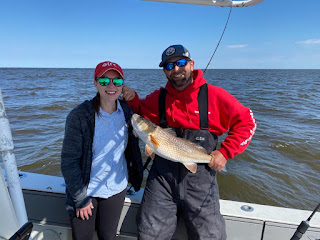 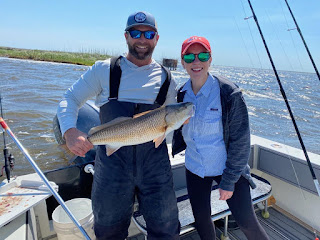 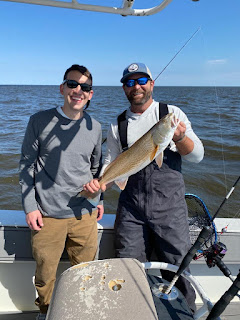 Matt Deaton getting well into the double digits with the pups in just a couple hours.   Everyone called uncle and came in early.

posted by Capt. George Beckwith at 9:01 AM