Ended the tarpon part of my adventure with 3 fly rod released tarpon on 20# IGFA in two days of fishing, this little guy and a big 150 pound yellow bellied beast. 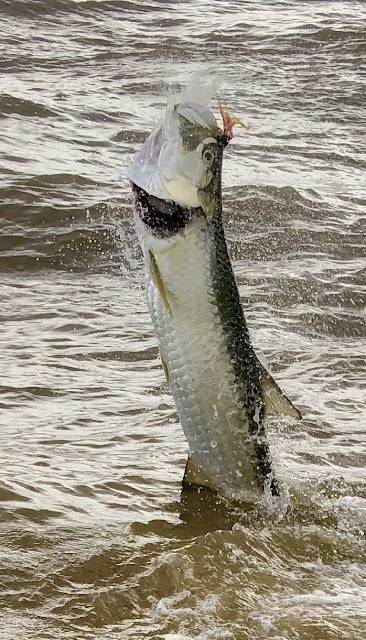 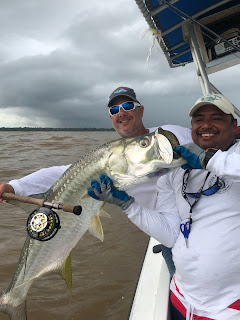 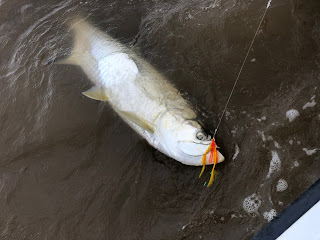 Wednesday morning we took a flight over to the Pacific side and were on the Dragin Fly chugging offshore by late afternoon, just in time to catch a dorado for dinner. 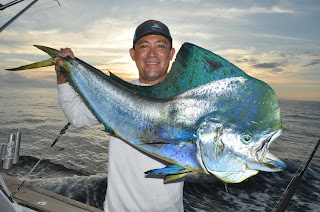 No great reports have been coming from the nearshore seamounts over the past week, so we dialed in a seamount about 130 miles offshore to start the next morning.      At daylight we were on the mark, but the water was  a little cool and a little green.   Fortunately we did raise a nice blue marlin to our left short teaser and caught him on the pitch bait.

After the release and a few more circles in the ares, James put out the planers and poons to catch some more pitch baits.   It was a good sign that the first bonito we brought to the boat and fresh bill marks where a marlin had taken a swat at him.    With a few more pitch baits in the cooler we started back on the troll, catching another blue, then half of a double header.    With a couple more single marlin releases, we were 5 for 8 by 8:30 in the morning. 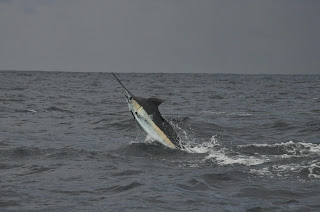 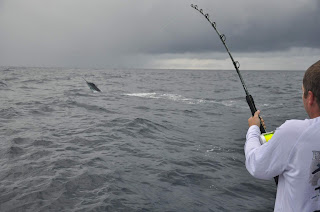 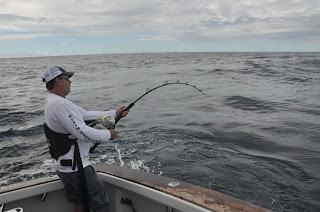 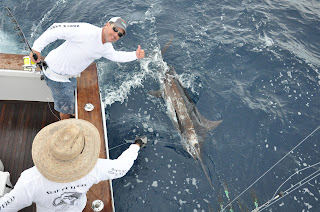 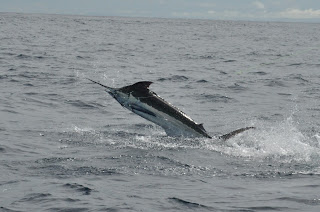 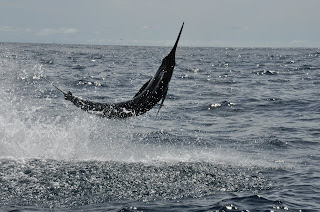 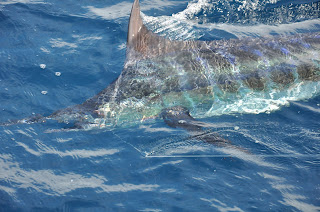 Dedicating the afternoon to fly fishing, with this many fish around, there was no better opportunity for me to finally land a marlin on the fly.   To this point my lifetime score is about 0 for 15.   Pulling only 3 teasers and no hooks in the water, the pace slowed until a couple hours later we raised one on the left long teaser that got bill wrapped and started pulling drag.     I grabbed the middle teaser to get it out of the way and there was a hot blue marlin right on its heels.   Somewhere between handing off the teaser rod and getting my fly in the water, the line got twisted around the rod between the reel and the first guide.    I didn’t have all this figured out until the marlin ate the fly with a ferocious going away bite.  Within a microsecond we were well into the backing that was literally sawing the rod in half.   In my attempt to clear the line around the reel I broke the 20 pound tippet and got some pretty painful line cuts across three of my fingers.   Rooky mistake on several levels.

Meanwhile , we landed the fish that was bill wrapped on the teaser, which turned out to be a sailfish.
About 2 hours later I get my second shot, the fish  teased up to the transom, I made the cast and just before the 200 pound marlin takes a great going away bite, I look down and see that I again have the line buggered up around the rod.   Fortunately I get all clear before the take, the single 8/0 hooks deep and the backing is again flying off of my Mako reel which is now in freespool to prevent the 20 pound leader from breaking. 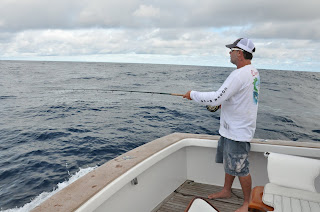 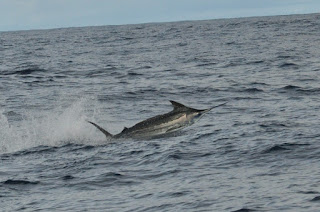 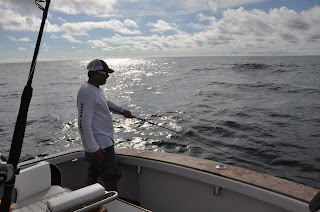 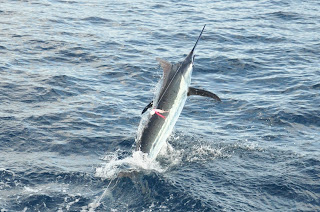 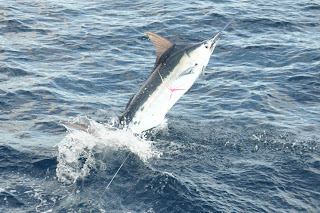 Just as Jake said, the fish settled down and came to the surface.   I got my mono backing back, which stretches, protecting the light tippet.    Then we were back in the backing.  At the end of that run, I cranked the drag up a little and got some fly line back before another run.  Cranked it up again and this time I got almost to the leader.    Another short run that never left the fly line, then leader in the rod tip and a release.    From here on out I tested the tackle and the strength of my knots, eventually putting the leader in Berto’s hand with the 200 pound marlin laid over on its side from the 10 pounds of drag that was now on him.   Fly retrieved an my first blue marlin on the fly released. 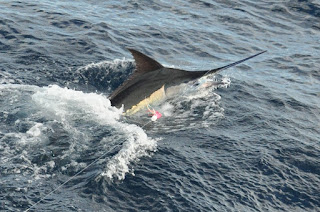 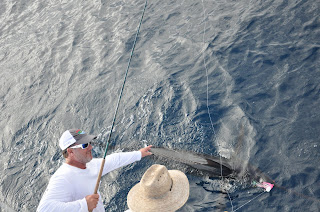 For the day, we ended up 6 for 9 on conventional, 1 for 2 on the fly with a sailfish “release” and a striped marlin and 2 other blues that were raised but did not eat. 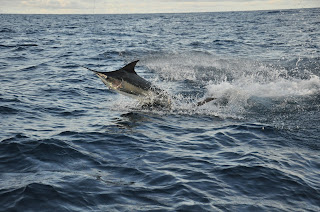 Through the night we made 6 swordfish bait changes on two different rods, but never got a bite from anything other than small sharks and squid which made keeping a fresh bait in the water almost impossible once the moon came up.
Early start the next morning we missed the two blue marlin in the spread, catching the third one.   With over 130 miles to make it back to Los Suenos before dark on this short trip, we are currently running to a seamount a little closer to home....... 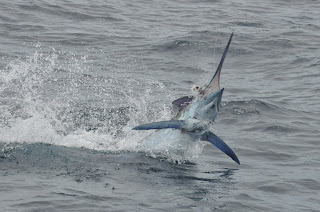 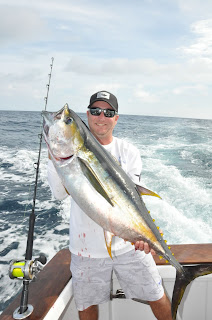 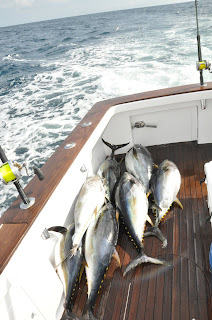 .....landed a 2nd blue marlin for the day and didn't get a bait to our 5th marlin raised for the day, but we did work on the 40-60 pound yellowfins.