All the difference a little wind makes

A lot of customers don't understand the dynamics of the Neuse.   We have no signficant lunar tides.  Our tides are primarily wind tides.  If the wind doesn't blow at least a little, then the water doesn't move.  If the water doesn't move, the fish don't move.  If you land on them, great.  If you are throwing corks for the big drum, even better, but if you are a bait fisherman, you need the wind to move that water and the scent of your bait so the fish will find you.
Several days this week we have had no wind.  I mean nada.  When I jumped off that tarpon the other day, I cleaned my cutting board and watched the scales drift straight down to the bottom.   Glad that I landed on enough of those unicorns to get a bite.   Greg did good landing on the trout the same day, but had a tough day before.  Jennings did good landing on the puppy drum, but in general, our mixed bag fishing the last several days has been tougher than we like.   All that changed yesterday with that southwest breeze ahead of the front,
Greg, Jennings and Ray all had similar afternoons, easilly catching their limit of pups in one spot and releasing double digits on their next stops. 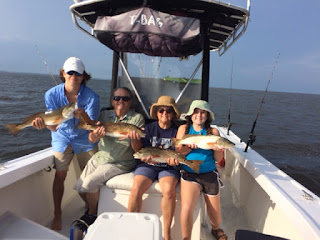 Greg stayed out a little later and caught a few of these before running in from the storm. 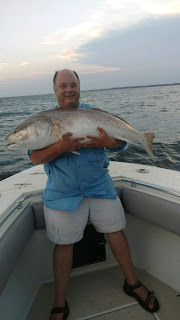 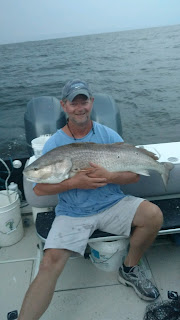 This weekend we are going to get all the wind we want and the big center consoles are going to be crushing the big drum with all the pups we can stand.   This nor'easter is just what we needed to cool off the water and send the next big plug of big drum up the river.

posted by Capt. George Beckwith at 8:01 AM