Catching a tarpon anywhere in the world is a special thing, but catching one in NC is REALLY special.   Anyone can get lucky and put one in the air, but there are only a few people in this state who can consistently get a bite, I was with a couple of those guys yesterday.

For the last decade tarpon have been rare in the Pamlico Sound, so much so that I have not actively marketed or targeted the few fish only occasionally making a showing.   Looks like this year is different.   I have been receiving reports of a "good sign" of tarpon from all over the Neuse River and Pamlico Sound.  Last week I poked my head into the river under less than ideal conditions and was surprised to see several groups of fish.    Yesterday I had a chance to ride along with Capt. Greg Voliva and Brynn "Tom Cat" who always has a rabbit's foot in his pocket. 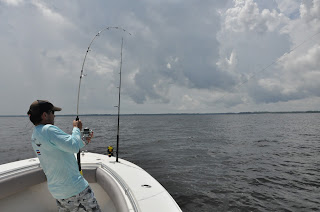 Conditions were not ideal, but we saw enough fish to get in position.  After about 5 hours of hard fishing, running through 50 pounds of bait, catching at least one sting ray for every pound of bait used, we connected with the right one.    It was a bite that we would have never gotten, if we had given up and "went fishing for something else". 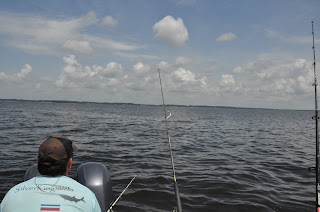 We would have never landed that fish if attention had not been paid to the details.   Keeping hooks sharp, leaders fresh, knots strong and line unchaffed while shagging multiple sting ray hook ups is almost impossible to do with customers who don't know a thing or two about fishing.

I'll tell you like I told folks for over a decade of guiding tarpon trips every day for about 60 days in a row.    "You are not going to catch a tarpon if you are not tarpon fishing." 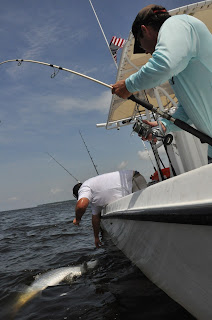 If you want to catch a tarpon.  I mean if you REALLY want to catch a tarpon, then you better be prepared to put your time in and plan on booking a full day TARPON trip.   Bring plenty of water and we will bring plenty of bait.  We will NOT have any "little rods" on the boat to go and catch something else on "plan B".     Do not expect to get a bite, but expect best efforts and if you keep your eye out, you might even see a fish or two.

Sure, we can  book you with a good guide who can "fish" for tarpon if conditions are right, then go looking for something else if it doesn't happen, but if you want a realistic shot at catching a NC tarpon, then you need to say you want a TARPON trip.......and ask Tom Cat to borrow that rabbit's foot. 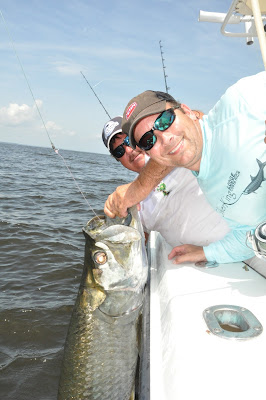 posted by Capt. George Beckwith at 7:02 AM