I'm in charge of sending proof of life pictures of Anna's dog, usually required with the daily newspaper in order to verify date.    His appearance has changed.   We were on the before bedtime piss walk when Riley caught wind of something and gave chase.    I usually encourage the little guy to run the rabbit around the yard at home, here in Costa Rica he is all about the coates, which are like raccoons, he loves it when they scramble up the palm trees to escape is ferociousness.

Last night he bolted after something, cornered in the bushes in front of my van which I was standing next to.   Then I heard it.  Sounded like two distinct burst of spray from a Windex bottle.   Out comes Riley from the shrubs with this funny look on his face and then the wall of skunk stench hits me.  Powerful stuff at that range.

There was no tomato juice in the house, now there is no more pasta sauce, ketchup or bloody mary mix and Riley's hair was died pink until I picked him up from the groomer about an hour ago. 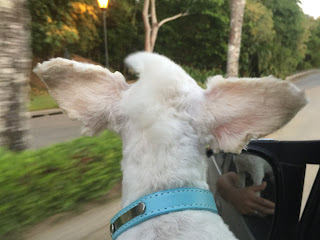