June 9, 2015: My good friend and client, Danny Cline and I boarded “Dragin Fly” at Los Suenos Marina, met up with Captain James along with his crew Berto and Marcos, and headed out toward a place I call Blue Marlin Destination - X- #7 and  #8 (BM D-X- #7). We left the dock at 1:30 PM ran straight out for an hour, then deployed our teasers and set up our fly rods for billfish. At 3:00 PM we raised a big Sailfish, it teased in quickly, Danny Cline made a good cast, and six minutes later we released a 100 pound plus sailfish on 20 pound, class IGFA tippet. We continued running at trolling speed all night and arrived at our destination at 4:00 AM. 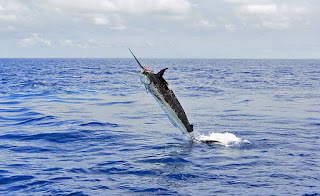 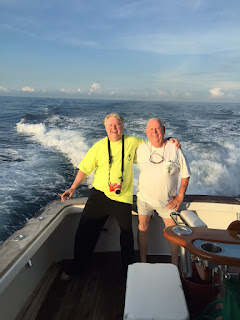 June 10, 2015, Danny and I woke up at 4:00 AM smelling sausage and eggs, and a pot of great Costa Rican coffee brewing, while we were over 140 miles from the marina, out in the ocean. After breakfast, we cleaned up, and began deploying our teasers, and getting the fly tackle ready for some Blue Marlin fly fishing. By 10:00 AM we had raised six Blue Marlin, Danny Cline was the angler, he got three Blue Marlin to bite his pink and white “Cam Sigler” tube fly. The first fish  ran 50 foot, stopped, shook it’s head and the fly fell out, the second bite was not a legal bite as the Marlin ate the fly before Danny could make his cast, this fish went deep, and Danny broke the class tippet as he didn't want to waste time fighting a fish which would not count, the third Blue Marlin which ate Danny’s fly, hit the fly with it’s bill, however it never came tight so, even though we call it a bite, it was never hooked. Fishing slowed down between 10:00 and 2:30 and then between 3 PM and 3:30 PM, we raised 3 more Blue Marlin, One ate the teaser, and jumped before letting go of the teaser, the other two didn't tease into casting range. As the sun set and it began to get dark, we have raised 9 Blue Marlin and had three bites today, that is an awesome day of fly fishing, even though we have not caught a Blue Marlin yet on this trip. We will sleep aboard out here in Marlin World, between 8 PM and 4 AM, and then start all over again tomorrow.

June 11, 2015, After a shower, a great Breakfast, and a couple cups of coffee, we deployed our teasers at 5:00 AM. Our first Blue Marlin raised was at 5:50 AM, it came in hot, swam past my fly, and up under the boat before fading away without eating my fly. At 70:30 we raised a Striped Marlin, this fish never came to the fly, and we never saw another fish that morning. At 9:05 AM, Captain James and I decided that we would leave and steam about 130 miles to the southwest, to a sea mount which I call "Destination, Blue Marlin - X - #1” (“DBM-X-#1). We never raised another fish  until 4:15 PM when we came onto a piece of floating stuff, at which time we raised, two Blue Marlin, and a big Wahoo, none of which teased in for a bite on our fly. We arrived at our destination at 11:00 PM and went to sleep, No Fish Today!
June 12, 2015, After a hot shower and a good breakfast between 4 AM and 5 AM, we deployed our teasers, and got the fly tackle ready. James spoke with the captain of “Fish Tank” who had fished here yesterday, he raised 20 Blue Marlin between 9 AM and 3 PM on June 11th here, so we feel that this is the best location to spend the last day of this Blue Marlin School. We raised a Blue Marlin at 5:35 AM which did not tease into range, we saw Fish Tank catch three on bait before 7:00 AM, The conditions are good, with relatively calm seas, lots of bait, but slow fishing for the fly boat. There were five boats fishing on this spot, with only the boat which was fishing with live bait getting any fish. At 10:00 AM Captain James and I decided to pick up and run about an hour to a sea mound (BMD-X-2), which is a little closer to shore and on which there were no other boats fishing.

We arrived and put our teasers in the water at 11:00 AM, Fish Tank had run past us on the way over and hooked a Blue Marlin just as we arrived. Three minutes later we raised a red hot 150 pound, Blue Marlin, which teased in, and ate Danny Cline’s well presented pink and white tube fly, and the battle was on (for a short time), when that Blue Marlin kicked in the after burner and as he was 150 yards out and flying away, the 20 pound tippet broke and this Marlin was gone. Then at 11:42, a red hot, 250 pound Blue charged in on the bridge teaser, Danny cast the pink and White CS popper fly on 20 pound class tippet, and that Marlin ate it big time! At 12:01, Danny Cline released his first Blue Marlin of this trip, and his sixth Blue Marlin on 20 pound class tippet, on fly, in his lifetime. By 1:15, we raised 8 Blue Marlin, including 2 double headers, at this location, (BML-X-2), We got a total of four bites of which three flies came out on a jump, while Danny caught and released that nice fish. It is now 5:30 PM, we never raised another fish today.
As we pull our teasers out of the water, and begin our 13 hour trip back to Los Suenos Marina, the final score from this, my first, “Blue Marlin Fly Fishing School” of the 2015 season is as follows. We raised 20 Blue Marlin, one Striped Marlin, and one Sailfish, We had  7 Blue Marlin bite the fly and jump at least once, and one Sailfish bite the fly, Danny Cline caught and released a 100 + pound Sailfish, and a 250 pound Blue Marlin, both on 20 pound test, class tippet, on fly tackle, while using IGFA rules. Two years into my Costa Rica Blue Marlin Fly Fishing School Series, all of my Students (Anglers) have caught at least one Blue Marlin on fly!  100 percent success!, I love my job!

Today, June 13, 2015 I am in my condo at the world class, Los Suenos Resort, Danny is on his way home to West Virginia, my good friend and client Hugh Chatham is here with me and Craig Machado will arrive tomorrow. My buddy George Beckwith, (Dragin Fly owner) is here until tomorrow. We are planning the rest of our Summer season for my "Costa Rica, Blue Marlin Fly Fishing School" series fro June, July, August of 2015. We do still have one week available during the first and possibly second week of August, other than that we are sold out during this season. We are heading back out on Monday, stay tuned for more action from "Blue Marlin, Fly Fishing World"!