Captain of the Year Nomination

The InTheBite Captain of the Year award was initiated in 2003 as a way of recognizing the achievements of the top captains in sportfishing. Since that time it’s become one of the most prestigious awards in the world for the professional sportfishing captain and the past Captains of the Year read more like a sportfishing Hall of Fame than anything else. Just receiving a nomination for this prestigious award is a tremendous accomplishment, one that represents years of hard work, dedication and personal sacrifice, so please join us in congratulating the 2013 group of nominees WHICH INCLUDES CAPT. JAMES SMITH of the Dragin Fly.

InTheBite Captain of the Year award recognizes excellence among the world’s professional sportfishing captains. Those unfamiliar with the job see only the bright spots—exotic destinations, big shiny boats, the adrenaline rush of a hot teaser bite—but those who’ve put in their time at the helm understand that it’s not all Mai Tais and Yahtzee out here. Being a true professional demands a tremendous amount of both dedication and commitment. There’s always some sacrifice too, especially when it comes to a family.

We continue to be impressed and proud of our crew and we are so happy to see Capt James be recognized in this manner. All of have fished with him recognize this would be a well-deserved honor. We will keep you posted as details become available. 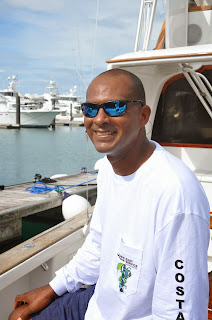