Where are the drum?

They're everywhere.  People look at me with a blank stare when they ask me where a good place might be to set up for a big drum and I tell them anywhere.   If you don't get a bite within an hour and a half, then move.

For 3 summers we tagged drum with radiotransmitters and followed them around the river/sound.  We NEVER found the same fish in the same place two days in a row.   We saw that they would sometimes "lay up" and rest for 8 hours at a time, but when they went on the feed, usually a couple hours before sunset, they were really moving, 3-4 miles/hour.....that's 16 miles in 3 hours.   So it doesn't matter where I caught them last night, I rarely fish in the same place twice. 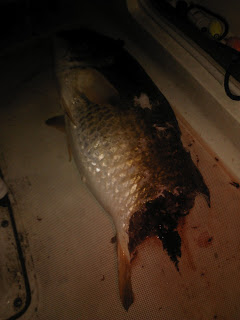 For whatever reason, there seem to be a few more bull sharks around this year.  I saw an 8 footer cruising our chum slick two days ago and another one was hooked near us yesterday.  The below is a pic of a drum that had an encounter with a bull shark in the last two days.   This has never happened to me, but I hear about it about once/year.

posted by Capt. George Beckwith at 9:29 AM