About 3 weeks ago, Anna brought home Riley.   I was consulted about the possibility of the acquisition of a dog from death row in one of the pounds, but I was not informed of his arrival until I got home from the Roanoke.   I was also a bit surprised by his appearance.   Definitely not what I was expecting…..small, less than 10 pounds…."so he can fit under the seat in the airplane when we travel.”.    He was also very fluffy.  Fluffy to the point that the only way to confirm his gender is through careful examination.  A casual glance would not reveal his manliness.   Riley is also very white, not like white as in a white labrador with always a twinge of yellow on the shoulders or down the spine of the back.  No this dog is all white, like white, white.  This dog is so white that it might otherwise be named Snowflake, or Cottonpuff.     At least it’s not “yippy”, the only thing that he had going for him when we first met.

For the first two weeks, Riley and I had some bad “vibes” going back and forth.  I had no reason to like him and I probably reminded him of someone bad in his life that he once knew.

I would call him, he would go the other way, under the couch, under the table, behind Anna.   He wanted nothing to do with me, which could become a problem.   Although Riley is Anna’s dog, as much as she travels, I am the one who will inevitably be left in charge of his care and wellbeing.   Maybe we weren’t going to be best friends, but we had to come to an understanding that I’m not that bad of a guy and would never hurt the little feller.

It started with us sitting down on the kitchen floor next to the open fridge, Riley under the kitchen table, me trying to find the way to his heart through his stomach.   A bit of cheese, a sliver of ham, crumb of bread…..these little dogs really don’t need to eat that much.   From the open fridge and his tea cup sized dog bowel, we tolerated each other.    The closest that he would come to me is when I had ice cream, finishing the last spoonfull or licking the last bite off of the stick of a ice cream bar.

This past weekend, it all came together between Riley and myself.   Anna went up to DC to visit a friend in town and left me with Riley.   First day when I got home from fishing, the little sucker had forgotten totally who I was.  He was pissed about being left home alone all day and didn’t want to have anything to do with me.  I ended up dragging him out from under the bed and taking him to Dairy Queen.  All was fine with Riley’s world after that.   It would have been crushed if he only knew what people were saying about him.   "Look how cute SHE was” or “What is HER name?”  "Oh, where did you get that little fluffball, will he retrieve ducks?"    I’m glad that he didn’t’ hear the guy at Jim Dandy asking me what I was doing riding around with a  “fluffy, white rat”.

Next day, we were going to change all of that.  I had to drop the tower boat off at Mobile East Marine to get some overdue not-so-regular maintenance completed.  After dropping off the boat, I’ve got a couple of hours to kill, so Riley and I make a drive to New Bern to see Kathy Roberts of Paws-n-Claws.   Riley got bathed and shaved, trotting out of the “spa” sporting a blue Mohawk, no confusion of his masculinity now…..but what is Anna going to say about what I have done to HER dog?

After dropping Riley off at the house and running a trip in the afternoon, I was hoping things between Riley and I would be a little better,  I come in the house, call him and he comes about half way down the hall rolls over and pisses all over himself.  Nice.  After getting picked up and lightly scooted out the back door, I had a revelation and Riley and I had a conversation.

My revelation was that this little guy is accustomed to being picked up, carried, swaddled and doted on by Miss Anna.  Rewarded all the time for what?  Looking cute? That ain’t going to happen with me.   He’s a dog and I’m leader of the pack.....at least til Anna gets home.  If he wants my attention, he’ll get it by doing what I say.

I have been owned by Labrador retrievers, both blacks and yellows, since my teenage years.  Even though, I am a “dog person”, I still have a lot to learn about little dogs, but geeze, they’re still dogs.  That afternoon, Riley and I started some scaled down basic obedience training, especially, Sit, Stay, Come.   With reassuring lifts of the head and scratches under the chin, he began to “get it” and me and Riley have been just fine.
Since Anna’s been home, Riley has latched right on to her, but at least he does come to me when I call him.   What do you think? 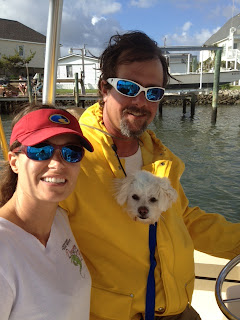 Some differences that I’ve learned between “little dogs” and labs:
If you don’t give them water, they both will drink out of the toilet bowel, but little dogs have a greater chance of falling in and drowning.
Little dogs don’t eat much, a couple grains of Ruby’s left over dogfood and he’s fine.  A leftover bag of adult dog food will probably last a little dog’s lifetime.
Little dogs and big dogs both like to chase rabbits…..except the rabbits turn around and chase the little dog when it gets close.
Little dogs and labs both have gas, just not as much of it. .
When walking a little dog, you can ignore the grenade that it leaves in your neighbor’s lawn, not as easy to do with the landmines that labs leave behind.
Little dogs don’t mind getting a bath…..
When little dogs bite…..it’s cute?